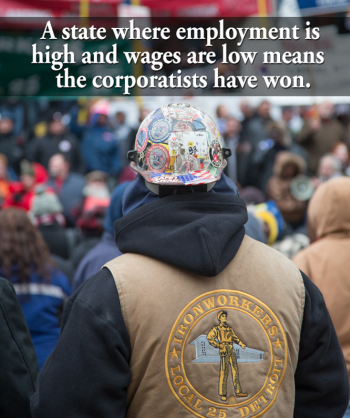 This past week, corporatists ticked off a major agenda when the United States Supreme Court decided in their favor in the Janus v. AFSCME case. With this decision, SCOTUS has turned America into a “Right to Freeload” country.

Will Swaim, president of the California Policy Center, an affiliate of the Koch brothers State Policy Network (SPN), celebrated the decision to kneecap workers and their ability to bargain collectively for decent wages, safe working conditions, health care and other benefits, and a retirement with dignity saying, “Just in time for Independence Day, the U.S. Supreme Court has delivered millions into greater liberty.”

Independence. That’s a funny word when it’s used in this context, isn’t it? What Mr. Swaim is crowing about is the fact that workers who benefit from the collective bargaining agreements negotiated by their unions are no longer required to support those unions with by paying a small fee to give them the resources they need to do the job. As LOLGOP put it on our podcast this week, this is actually a Thirteenth Amendment issue and the corporatists and their water-carrying shills like Will Swaim are forcing the unions to work for free — a form of indentured servitude — at least for the workers who refuse to support them financially.

In what may be the most tragic demonstration of Stockholm Syndrome I have ever seen, the plaintiff in this lawsuit, Mark Janus, penned an op-ed in The Washington Post titled, “Why I took my case over forced union dues to the Supreme Court“.

In his op-ed, Janus says Illinois “has billions of dollars in unpaid bills, has unbalanced budgets and is bleeding people and money” and says he “fought to not be part of that mess”, suggesting that, if it weren’t for state workers represented by the American Federation of State, County and Municipal Employees (AFSCME) union asking for decent wages, benefits, and working conditions, Illinois would be in the black. He’s willing to forgo his annual raise and put his retirement on a spin of the stock market roulette wheel by converting his pension to a 401K plan, apparently because he cares so deeply for the finances of his state government. And that’s why he got the Liberty Justice Center, a project of the Illinois Policy Institute — another SPN/Koch brothers affiliate — to fight for his ability to freeload off the efforts of the union that represents, by law, ALL of the workers employed by the state government. Including him.

Independence. Liberty. Freedom. These words are used as weapons to attack workers and yet it is independence, liberty, and freedom that allow people like Mark Janus to choose a union job with good wages and benefits — negotiated on his behalf by the AFSCME union — over a non-union job where it’s him against his bosses.

And, at its core, that is the crux of this argument: Is it an individual worker against the entire collection of resources held by the corporation? Or is it the workers banding together and fighting for their position on a much more even playing field where they have resources of their own to bring to the table? Mark Janus used his independence to accept a damn good job and now wants to be able to enjoy the fruits of others’ labor without having to contribute anything.

Here’s the good news: Most workers are NOT freeloaders and union membership, even in Right to Freeload states like Michigan, is growing. Unfortunately, the attacks on workers won’t end and union membership will continue to face a stiff corporate headwind. And that’s bad for all of us. Here are a couple of charts Mark Janus and the corporatist puppet masters he serves don’t want you to see: 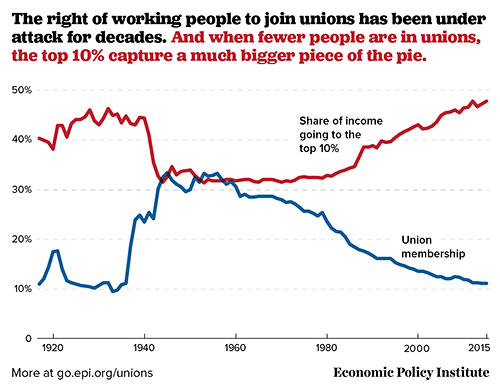 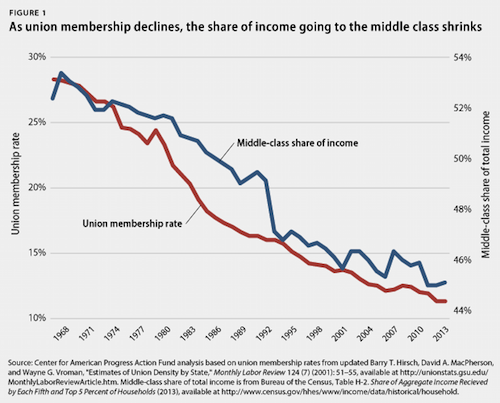 Corporatists have us right where they want us at the moment: high employment and low wages. It’s up to us to support our unions every chance we get, even if you are not in a union. There isn’t a progressive cause that doesn’t benefit from strong unions and ALL workers benefit whether they realize it or not.

Workers — together, collectively — fighting against corporations that want us completely dependent on them. THAT is true independence and something worth celebrating.