UPDATED: You can’t shame the shameless: Take the fight over Trump’s immigration atrocities to members of Congress 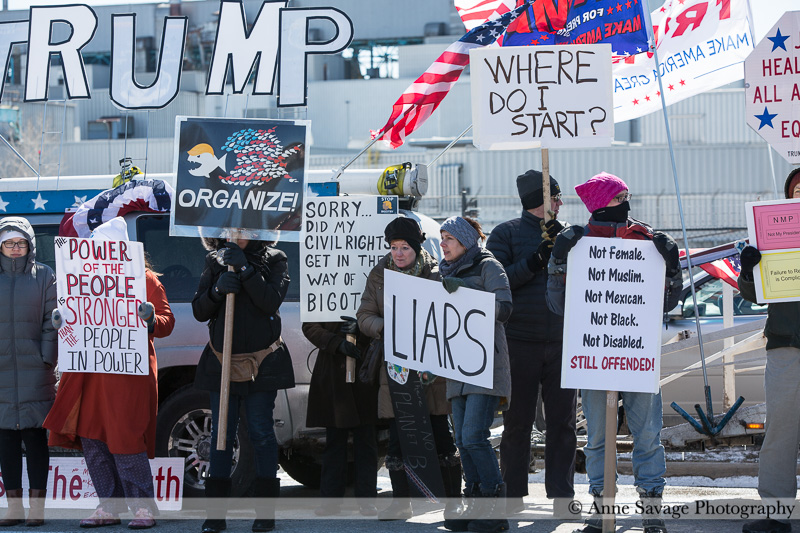 “I did try and fuck her. She was married… I moved on her like a bitch.”

“[John McCain]’s not a war hero. I like people who weren’t captured.”

“If Hillary Clinton can’t satisfy her husband what makes her think she can satisfy the country?”

“[Kim Jong Un] speaks and his people sit up at attention. I want my people to do the same.” 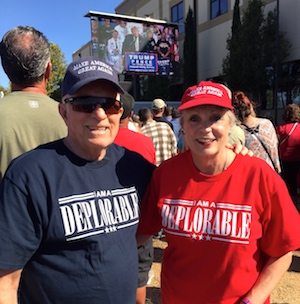 These deplorable quotes are from a man these lovely people pictured here on the right are proud to say they support. There is an entire segment of Americans just like them; many are God-fearing church-goers with lovely grandchildren who respect women and war heroes and a country where you are free to dissent. But, when Donald Trump speaks, they’ll swallow anything he crams down their craw. They’ll overlook any disrespect he hurls at women or war heroes or anyone else they claim to respect, no matter how crude or disgusting the comment is.

And Donald Trump knows this. Donald Trump taps into the id of this special group of Americans and allows them to feel just fine with statements that would normally cause shame and revulsion. Trump wields his shamelessness like a weapon, using it to draw support from nearly one-third of Americans, to vilify anyone who stands in his way, and to dehumanize those he is running over. He’s the “big daddy”, the patriarch conservatives fawn over, eager to be told how to think and thankful to be told it’s A-OKAY to be just as deplorable and un-American as you want. It’s no accident that he repeatedly uses words like “strong”, “rough”, “tough”, and “animals” on a regular basis.

Trump's logic is based on a lie.

91% of parents whose kids have been taken are being prosecuted for misdemeanor first time entry.

But Trump acts like people who committed a MISDEMEANOR (like jaywalking) are a dangerous infestation of criminal VERMIN.

This is pure PROPAGANDA.

The latest revelations about what our country is doing to small children at our border should have all Americans cringing in revulsion but that’s not happening. Trump isn’t capable of feeling shamed by this and, in fact, he WANTS us all to be talking about putting children in cages and treating them like animals instead of human beings. He WANTS you to protest. He’s confirmed that this is a negotiating tactic so if nobody is talking about it, it’s completely ineffective. He thinks the intense blowback benefits him and will force Congress’s hand to compromise with him on something for which we should give no quarter.

He also wants his base to get aroused by his ability to “secure the border”. Being “rough” on brown people is not a bug, it’s a feature.

The only thing that will work here is if we take a stout rope and lash every single Congressional Republican to this heinous, immoral, inhumane policy (yes, it’s a policy) and to do so every single day until the polls close on Tuesday, November 6th. THEY own this and should pay the price.

Think I’m wrong about any of this? Here’s your proof:

It doesn’t stop there. Trump’s fascist crew wants to be able to incarcerate children indefinitely:

In one of the most closely watched plans under discussion, DHS has proposed a new rule that former Obama administration officials and immigration advocates worry could be used as an end run around a 1997 court settlement that limits the time migrant children can be kept in government custody. Putting a formal government rule in place, lawyers and advocates say, could in effect supersede the settlement, allowing the administration to get rid of it altogether by dropping the rule a year or two later.

“Once you rescind that regulation, then you go back to being able to do whatever you want and the detention becomes the complete discretion of ICE,” said Leon Fresco, former deputy assistant attorney general for the Office of Immigration Litigation at the Department of Justice. “That is where people think this is headed.” 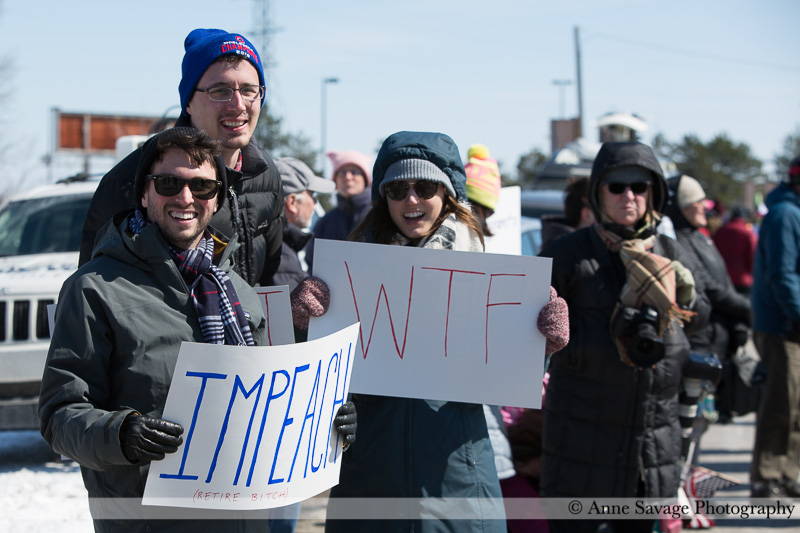 Yes, we MUST protest. We, as Americans, MUST let the world and our fellow citizens know that this is NOT who we are, despite the fact that nearly one-third of Americans are okay with it. But HOW we protest matters. Shaming Trump is a fool’s errand; he’s shameless. However, there are hundreds of members of Congress, men and women who can actually DO SOMETHING to stop this creeping fascism, and most of them are up for re-election in November. These are the people who need to hear from us most. We must make it crystal clear that we will hold them accountable for not holding Trump accountable.

Let’s all make sure that we direct our protests in the most effective way possible. From now until the polls close on November 6th, make sure you’re being heard by Republicans in Congress. Let them know that the eyes of America and the eyes of the world are on them and that they will be held accountable for shaming our country by a shameless fascist who disgraces America in new ways every day. It’s no longer okay to shake our heads in disgust and post our outrage on Facebook. It is our patriotic duty to get involved NOW.

If you want to know how this creeping fascism can take hold in a country of mostly good people, we have history to show us. Please have a look at this essay:

What happened here was the gradual habituation of the people, little by little, to being governed by surprise; to receiving decisions deliberated in secret… The dictatorship, and the whole process of its coming into being, was above all diverting…

Nazism gave us some dreadful, fundamental things to think about — we were decent people — and kept us so busy with continuous changes and ‘crises’ and so fascinated, yes, fascinated, by the machinations of the ‘national enemies,’ without and within, that we had no time to think about these dreadful things that were growing…

Each step was so small, so inconsequential, so well explained or, on occasion, ‘regretted,’ that, unless one were detached from the whole process from the beginning, unless one understood what the whole thing was in principle, what all these ‘little measures’ that no ‘patriotic German’ could resent must some day lead to, one no more saw it developing from day to day than a farmer in his field sees the corn growing. One day it is over his head…

“You see,” my colleague went on, “one doesn’t see exactly where or how to move. Believe me, this is true. Each act, each occasion, is worse than the last, but only a little worse…

In between come all the hundreds of little steps, some of them imperceptible, each of them preparing you not to be shocked by the next.

We know where this leads if we don’t stop it now. Make the calls. Send the emails. Protest in the streets. But don’t think you’ll ever shame Donald Trump. Aim your efforts where it can actually make a difference.

The fate of America depends on it.

UPDATE: Lest you think I’m off base with my suggestion that Trump and his cadre WANT us protesting their despicable policy of separating children from their families, I give you Exhibit A:

A seasoned conservative troll, [senior Trump advisor Stephen] Miller told me during our interview that he has often found value in generating what he calls “constructive controversy—with the purpose of enlightenment.” This belief traces back to the snowflake-melting and lib-triggering of his youth. As a conservative teen growing up in Santa Monica, he wrote op-eds comparing his liberal classmates to terrorists and musing that Osama bin Laden would fit in at his high school. In college, he coordinated an “Islamo-Fascism Awareness Week.” These efforts were not calibrated for persuasion; they were designed to agitate. And now that he’s in the White House, he is deploying similar tactics. […]

[F]or Miller, it seems, all is going according to plan—another “constructive controversy” unfolding with great potential for enlightenment. His bet appears to be that voters will witness this showdown between Trump and his angry antagonists, and ultimately side with the president. It’s a theory that will be put to the test in November.