“A Separation” We Can’t Live Without

Of all Mitt Romney’s deceitful pandering, his warmongering when it comes to Iran is the most despicable.

Faced with an ever-weakening campaign and an improving economy, his only hope is to gin up war. This President has been cautiously and effectively receding the “tide of war”, as he calls it. And Romney, along with Santorum and Gingrich who don’t know better, is doing everything he can to reverse this course. Foremost in this strategy is to identify Benjamin Netanyahu as Israel. He is not. 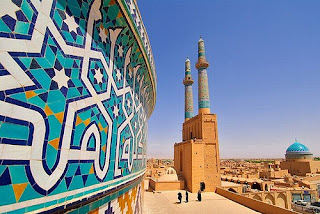 Netanyahu, unlike many of his predecessors, has shown no willingness to commit to a permanent peace in the region. And to many, like me, who believe that Israel should exist, this is a formula for its inevitable destruction.

Because it was George W. Bush’s favorite excuse, positing that history will be “the judge” has become frowned upon. But I believe history will judge that the President’s Cairo speech, his video message to the people of Iran and his election did more to destabilize the dominance Iran was edging toward in the region than any posturing ever could.

The mere fact that a man of African descent could ascend to become the most powerful man in the world sent a message to millions of Africans, Arabs and Persians: democracy can work.

And now crippling sanctions on Iran are just taking effect. This fundamentalist regime has never been so conflicted and so weak. And its enemies in Israel and the US neo-conservative movement want to strike, regardless of the incredible mayhem this will unleash. To do this, they want us to regard Iran as a monolith bent on the nuclear destruction of Israel. To do that, they need to focus on the regime, not the people of Iran.

This is a why the Academy Award-winning film “A Separation” comes at a key time. A masterpiece of the dissolution of a family, this film deserves the awkward adjective Bergmanesque, as in like the films of Ingmar Bergman, the greatest screenwriter of the 20th century.

What’s key in “A Separation” is what does NOT get said. In every scene, a character withholds essential information out of fear. This leads to crimes, betrayals and tragedy.

It’s a theme that would make sense in every culture. But this film takes place in modern Iran, a country where religious law is mixed with totalitarian governance and the systemic oppression of women. Economic desperation heightened by the regime’s isolation by the world makes the situation even more dire. And the result is silence when words are needed most.

When Franklin D. Roosevelt articulated what I see as the cornerstone of progressive politics “The Four Freedoms” he included “Freedom of Worship”. This is key phrasing.

True freedom is when you can worship as you choose (or choose not to) without forcing it upon others. This why it is crucial to me that your religion not be able to stop my doctor from prescribing the medication I need. This is why your sensibilities should not be able to stop me from speaking my truth. It gives me no right to have advertisers support my message on commercial radio. But I always have the right to speak.

War with Iran is not necessary. These are words that need to be said over and over.

Can we counteract the desperation of a conservative movement that is furiously retreading the preemptive belligerence that has failed us so badly? What other options do we have?

Thankfully the President is doing just this, calling out Romney’s warmongering. And now, sensing he was on the losing end of this argument, Romney now wants to talk about speeding up veterans benefits.

Governor, the last thing that’s going to help our veterans is loose talk of another dumb war. The hardest thing to say, especially for a politician who is floundering, is usually the truth.