How’s that “people take notes’ thing working out for you?

In the book “Game Change” by John Heilemann and Mark Halperin, Sarah Palin doesn’t enter into the second half. The bulk of the story is the battle between Hilary Clinton and Barack Obama. It’s a story will be told throughout American history, a story made even more relevant by Clinton becoming Obama’s Secretary of State and the image of them sitting together in the War Room during the bin Laden raid. Serious shit. 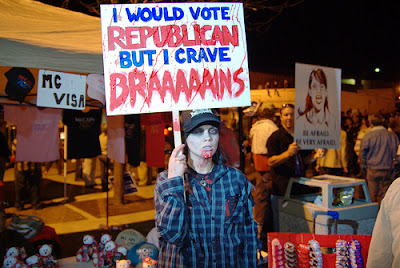 But in the “Game Change” movie premiering tonight on HBO, Palin is the star. And how could she not be?

I haven’t seen the movie but who doesn’t remember the summer of 2008 when for a brief moment it seemed John McCain had a brilliant game-changing choice as his running mate.

Plucked from near obscurity, Governor Palin was thrust into a situation so ridiculous that Hollywood wishes they’d come up with the idea first. A backwoods governor complete with a pregnant teenage daughter delivers a rousing convention speech and then bursts into incredible displays of ridiculousness, again and again, seemingly without ever knowing how ridiculous she seems.

Palin’s dearth of common knowledge and self-awareness gives her mental space to enjoy nearly messianic self-esteem. What’s amazing about Sarah Palin is her unwillingness to be humbled despite her inability to stop humiliating herself.

By some accounts, Palin was a decent governor. But to me, she was immediately a caricature. And in a few weeks she became the personification the know nothingness that would define the Republican Party during the Obama presidency.

And this is before she quit halfway through her term as governor of Alaska and refused to run or not run for president.

From what I hear, this film is exceedingly fair to Palin. Just the fact that they chose the gifted Oscar nominee Julianne Moore to play her rather than going with CGI, as I would, shows an attempt to be balanced.

Still, Palin is offended by any attempt to portray her as anything other than “The Undefeated”. She says she won’t watch the film. Or maybe she’ll watch it with the sound off, as she claimed to have watched Tina Fey impersonate her on SNL.

I’ll be watching it the sound on, tweeting my impressions and retweeting the Twitter gold I find. Piss off a liberal and join me at 9 PM EST.