Santorum surging all over Michigan 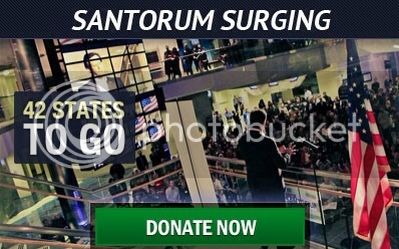 On top of two recent polls showing Santorum surging all over Mitt Romney in Michigan, we now have two more:

Two more polls show Rick Santorum with a lead in Michigan’s presidential primary — and a sizeable one at that.The MRG Michigan Poll, done in concert with Lansing-based Inside Michigan Politics, shows Santorum, the former U.S. senator from Pennsylvania, with 43 percent of the support to 33 percent for native son Mitt Romney, who grew up in Oakland County and has long been considered the front-runner in Michigan.

In the MRG poll, they were trailed by former House Speaker Newt Gingrich (11 percent) and U.S. Rep. Ron Paul of Texas (8 percent).

Santorum led Romney in every part of the state, the poll indicated, including metro Detroit, though Romney was ahead in Oakland County. […]

Mitchell Research, a polling firm in East Lansing, also has a new survey out showing Santorum with a 9-point lead over Romney in the Feb. 28 presidential primary in Michigan.

The Mitchell poll was done for MIRS, the Michigan Information & Research Service, and shows Santorum at 34 percent to Romney’s 25 percent.

THIS is why there’s no need for Michigan Democrats to debase themselves by voting in the Republican primary to make sure Mitt is defeated by Santorum. It’s unnecessary and, yes, unethical.

Primaries are for political parties to choose their candidates. Period. Interfering in that is to undermine our democratic process, no matter how you spin it.

UPDATE: You can add a fifth poll to the mix, this one the Detroit News:

Former Pennsylvania Sen. Rick Santorum has a slim lead over Mitt Romney, an indication the Michigan native son has yet to convince state voters he should be the Republican nominee for president, a Detroit News poll shows.Santorum leads Romney 34 percent to 30.4 percent among likely Republican primary voters, but the gap is within the margin of error of 4.4 percentage points.

Despite Romney’s win here in 2008 and the built-in advantages of name recognition and familiarity, party regulars appear to have doubts about his conservative credentials and the worth of his Michigan ties. It may cost him the dominant primary victory many expected.