GOP Talking Points Locked in Theater of the Absurd

Remember how the GOP got everyone all enraged at the deficits they created?

Who did the GOP instantly blame for the costs of two wars, trillions in tax breaks, completely unfunded, wasteful expansions of Medicare plus an economic crash that suddenly dwarfed their own massive failures abroad? The man who inherited the costs. 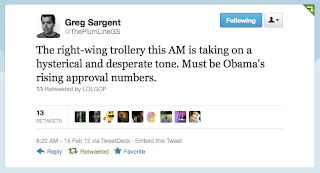 With a TV channel and apoplectic emails repeating the same talking points over and over, the GOP managed to make deficits the issue from 2009-2010. It was brilliant. Instead of focusing on how to fix the mess they created, they blamed the mess on the guy with a mop.

We all know the GOP’s agenda in 2001 was to set the surplus we created on fire, possibly to create conditions where they could call for the demise of social insurance. Comparing Bush and Obama on deficits is like comparing an arsonist with a firefighter.

But even making that comparison is a win for the GOP. We’re validating the argument that deficits matter more than job growth.

The fact is, when the economy is stalled, people will believe who ever sounds angriest. When they economy is improving, people are too busy to care.

Now the GOP is a in a tough spot. As the economy and the President’s approval show renewed strength, we’re into the tribal regions of Absurdistan. What are we hearing?

The President is waging a war on religion. You don’t have to be in the pews every Sunday to know the pious card is poison for swing voters.

Smart GOPs know this is a loser, so they’re trying to make the price of gas an issue, pointing out that it was under $2 a gallon the day President Obama was sworn in.

Yes, when the global economy seemed as if it were about to crumble under the enormity of Bush/Cheney’s failure, gas got cheap. Now that the economy has improved, it’s rising.

It’s gamed in some deep, dark profound ways, no doubt created by conservative polices. But it always happens.

You know what’s up more than gas prices? The Dow.

Another loser for the GOP. What’s next?

This President is Taking Away America’s Free Time with All These Jobs!

The “No Horseplay” Rule at Public Pools is Sharia Law!

What hysterical talking point from the GOP do you expect next?