America just isn’t that into the 1 percent 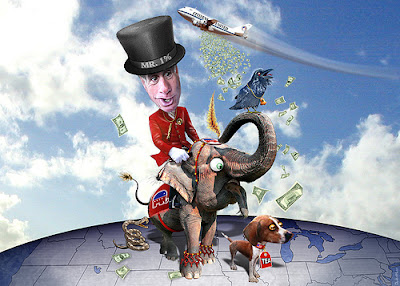 We let the GOP pretend they’re for small government, even though they don’t believe in the separation of uterus and state.

We let them say they’re conservative, when they want to pre-emptively start new wars.

We let them say that they care about the American Dream, as they try to destroy the fair progressive taxation that created the middle class.

We let the GOP pretend they’re patriotic when they believe that patriotism ends when the campaign begins, and the campaign never ends.

We let them try to turn words like “elite” and “birth control” and “college” into insults to serve a 1% that indulges all three in epic amounts.

We let them use women’s health care as a battleground for a war between good medicine and medieval theology.

But this is ending. As the right exposes themselves as loons, we have to stop letting the GOP pretend they’re speaking for anyone but the 1 percent and their temporarily embarrassed fan club.

When the House GOP has an approval rate lower than that of sickle-cell anemia and you say you speak for the “American people” you better use air quotes.

The mainstream of this country wants good schools, safe streets and affordable health care for all.

The mainstream of this country knows that anyone who has given big oil, big banks and big defense trillions in subsidies doesn’t care about government waste.

There is honestly only one issue the GOP wins on: low prices. Everyone wants lower prices.

They’ll drill for them. Slash education funding for them. Drive to Walmart for them.

The problem with low prices is that when you pay them you’re also paying a hidden tax. That tax is payable in the form of dignity for the middle class.

Every Walmart employee who retires with no money in the bank becomes a cost to us all. Every parent who has to send his or her kid to private school is paying a cost. Every time someone shows up in an emergency room without insurance, America pays.

Value is an American value.

When we treat each other as if we all matter, we all have value that we can nuture, everyone does better.

We have to stop pretending anyone thinks millionaire money managers like Mitt Romney should pay a tax rates half of what nurses pay—anyone besides Mitt Romney’s kids.

Because if there’s one thing 99% of Americans agree upon, it’s that life doesn’t need to be any easier for Mitt Romney and his kids.

CC image by my hero DonkeyHotey