Great turnout at the anti-Snyder Rally at the University of Michigan commencement. Easily 1,000 people and more coming in.

Next up, Lexi Salazar, 5th grader from Murphy School in Haslett, future zoologist. Says she wears red every Tuesday to show support for her teachers.

Matt Schrader from the Ann Arbor firefighters union speaking now. “Why are union members being asked to bear the burden without having a voice in the process?”

Amanda Caldwell, chair of the University of Michigan College Dems: “Governor Snyder knows the value of U of M degree. He has three of them and will receive a fourth today. All we’re asking for is a chance for ALL Michigan students to do the same”. 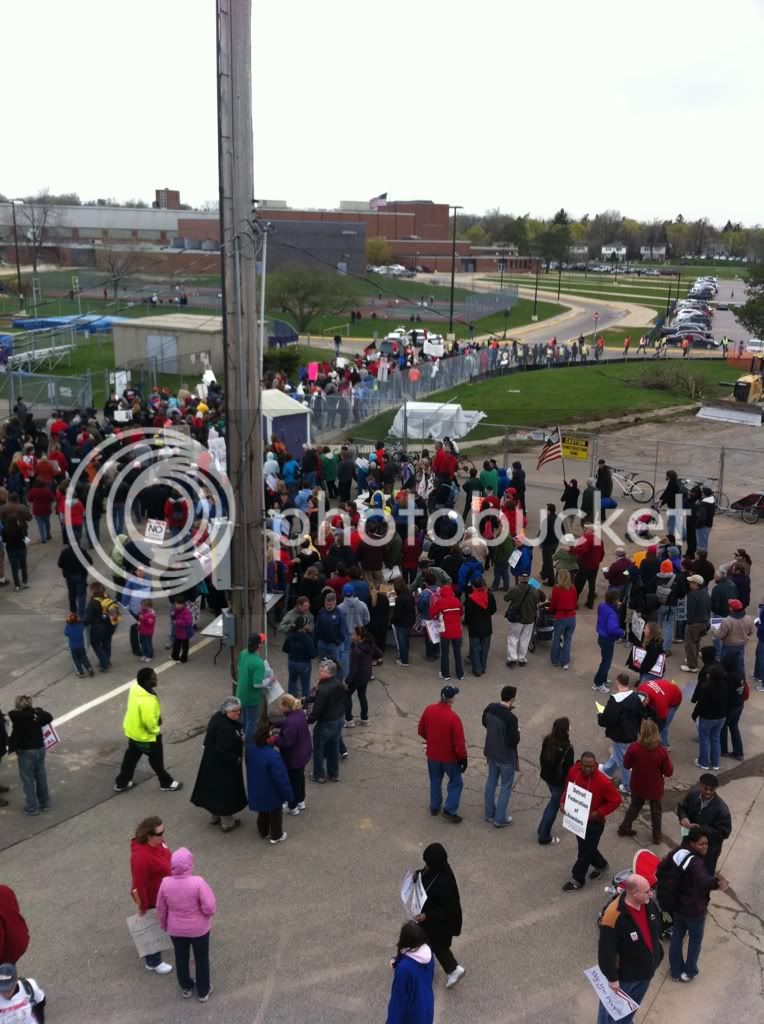 The march to the Big House begins!

Lots more pictures after the jump!

Stopping traffic at Stadium and Main in front of the Big House, many supporters honking horns.

10:52 – Governor Snyder must be speaking because the protesters are “ramping up” the noise! Most cars driving by are honking in support including a fire truck that just went by!

11:12 – Back at the car recharging my SuperBlogging iPhone. I can hear the protesters all the way over here. Ranks have swelled to at least 2,000 (and the sun is out!)

11:35 – Commencement is ending. It was a great showing by Michigan progressives in Ann Arbor. Here’s the Order of Exercises from the Commencement program. Note that the Governor is referred to as “Honorable”. I strongly beg to differ.

Here are some photos from my good friend Larry Anthony:

The nurses’ union had a plane flying a banner overhead during the rally.

Eclectablog, eclectablogging. (Have I mentioned how much I love my iPhone lately?)

Monday morning update: Can’t help but notice that the major media outlets said there were “hundreds” of protesters at best. That’s correct, I guess, if you were to say “twenty hundred”. If you look at the two photos of the streets in front of the stadium, the line of protesters goes off as far as the eye can see. And that’s a double row because they were marching in “circles”. Anyone who calls that “hundreds” is either dumb or is trying to minimize the real numbers. In fact, one of the reasons I feel strongly that I need to do these liveblogs is that we need some reality brought to the situation. Reporters often show up for the beginning of an event then leave to file their report before it is finished so they don’t see the full impact. On Saturday, many protesters didn’t arrive until close to 10 a.m. and joined the march to the stadium where more joined us there.

It was a remarkable event, one unique in my experience. Rick Snyder would be well-advised to notice the outcry against him and his policies. The voters in this state are fired up.