Well, they did it. The teabaggers had a rally right smack in the middle of the University of Michigan campus, here in the heart of the Liberalville that is the People’s Republic of Ann Arbor.

Seriously. You take away the racist and homophobic and violent signs and what you have left is just a bunch of angry, mostly white, mostly older people arguing about taxes being too high when their taxes actually went DOWN last year.

But the liberal students at the U., well they didn’t let us down. No siree. They had awesome signs.

All photos (except the crappy ones without her watermark — I took those) by Anne C. Savage, my talented and beautiful wife. Visit her website HERE. No, seriously, you should. She’s amazing.

There’s not much to say about the teabaggers themselves. Since it was Ann Arbor and they have been repeatedly (and mostly justifiably) accused of being racist, they found a nice old African American woman to emcee. We knew she was African American because (a) her skin was brown and (b) she mentioned that she was raised by African American parents about ten times during the rally.

About 600 people showed up, about 400 were counter-protesters (the Good Guys.) The counter-protest was organized by the Univ. of Mich. College Dems, a dynamite group of very hard-working young Democrats. They had their counter-rally begin an hour early at 6:00. The teabaggers got wind of this so they tried moving theirs to 5:00 and then 4:30 based on their Facebook page – a counter-counter-rally if you will.

The speakers began at 7:00 and they were…well…boring. No, seriously. I guess Michigan doesn’t really have any good teabag speakers or I’m just used to it now but these people are really ho hum these days. Because they are actually all pretty much getting tax cuts, they’ve been reduced to decrying the criminality of ALL taxes now. One guy suggested that taxes should only be used for wars (or getting ready for wars, of course.) Other than that, it’s THEFT!

So, we amused ourselves with looking at all the signs and comparing & contrasting the smiling happy faces of the Democrats with the angry, scowling faces of the teabaggers. And, just to warn you, this is a college town and everyone had their spell checkers turned on: no comical misspellings were to be found.

This girl ♥ puppies. You can never go wrong if you ♥ puppies: 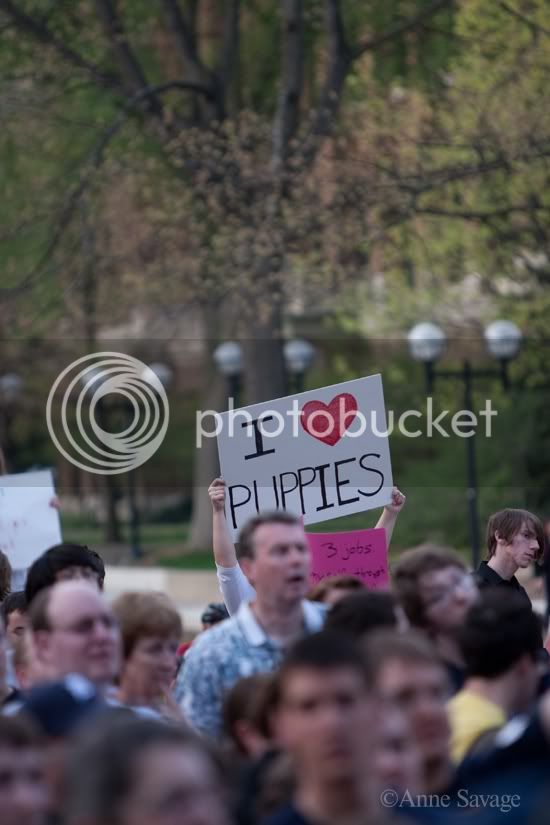 These students recognized the irony of holding a rally to protest taxes and “socialism” on a publicly-funded campus:

A return of Led Zepplin: demanded!

Here’s me educating some teabaggers. My sign said “Washington IS listening to us! Support the Obama TAX CUTS!” 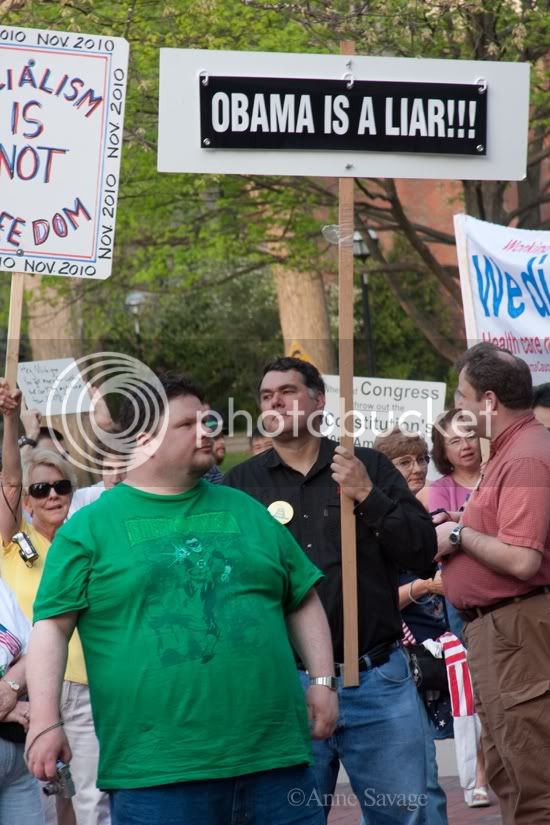 Waffle Dude, you’re everywhere! (By the way, the guy holding the “Inflation is a tax” sign is the candidate for State Congress that I wrote about yesterday that said OFA volunteers are “equivalent to Brown Shirts”.) 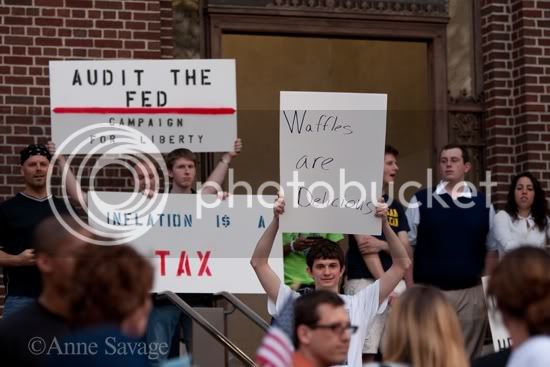 This guy ran out of money when he bought the can of spray paint. Couldn’t afford the posterboard. Totally didn’t matter. (I didn’t realize Colbert was running in the midterms, though… ;)

Here’s the sign my buds from the most-awesome Obama Caucus of Ann Arbor brought along. Hard-core phone banking and canvassing liberals, that group. 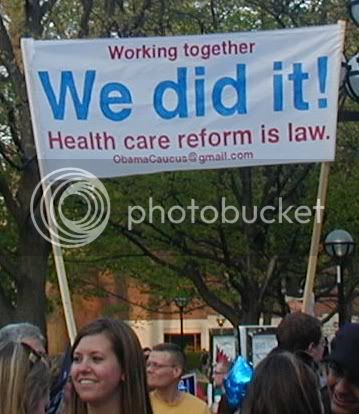 A grateful college student is a wonderful thing to behold:

Cheer up, grandpa. You got a tax cut. 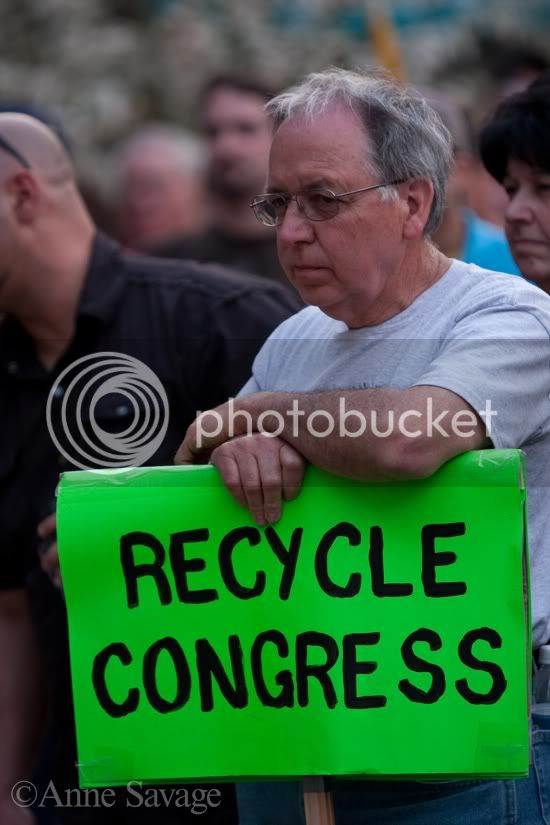 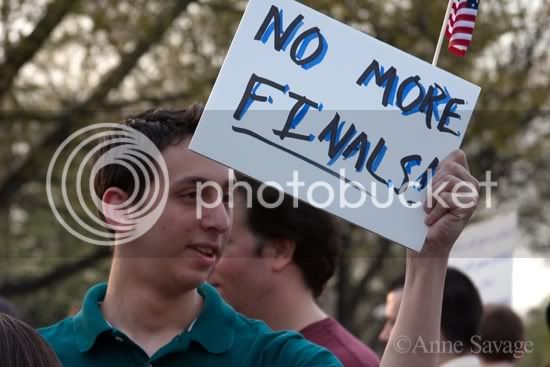 These ladies were the craziest of all the teabaggers. Hilariously, they showed up about an hour into the program, wandered around with their offensive signs for about 15 minutes then left again. Musta got themselves all worn out with all that protestin’…

Remember that protester your government warned you about? [???] This is that guy: 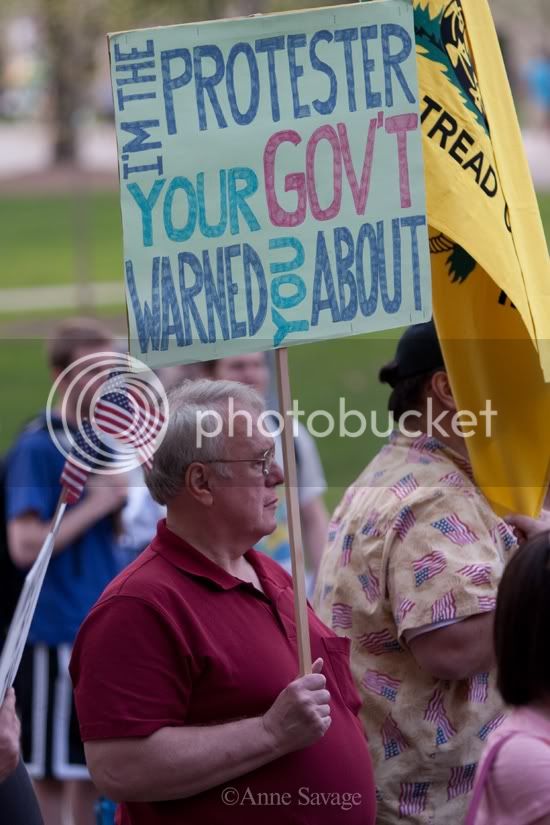 Toward the end, a bunch of us went behind the speakers and started dancing to the music they played. That’s my good buddy, Tom, with the “I Have a SIGN” sign. And, wait a second. Is that Waffle Guy again?

When the Lee Patriotwood (or whatever his name is) song came on, we all swayed and sang along… “I’m proud to be an American, where at least I know I’m FREEEEEEEE…” 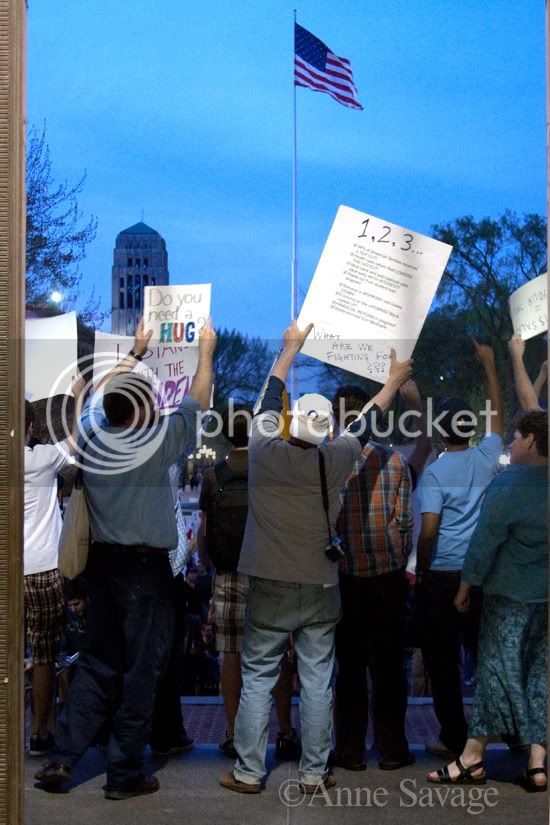 So, all in all, pretty boring. Mostly funny because the liberal students (and even non-students) chose to use the event to have some fun and not take themselves too seriously. One group held a Mad Hatter Tea Party right smack in the middle of everything and carried around a huge sign saying, “Where’s my bloody crumpet?”

There were pretty much no altercations. I saw no Hitler mustaches. No flagrantly racist signs (although there were some questionable comments by one speaker.) Their speakers were boring and spouted the same platitudes you hear every time. They talk about getting organized but they hate Republicans almost as much as Democrats to listen to them so they have no political apparatus to connect with so they have almost no chance of any solid electoral success, at least not in this area. Frankly they just really come across as a bunch of pouty spoiled brats who still can not accept the fact that they lost the election in 2008. Well, boo hoo, folks. You did.

And we didn’t. And we’re making progress. And you just have to deal. 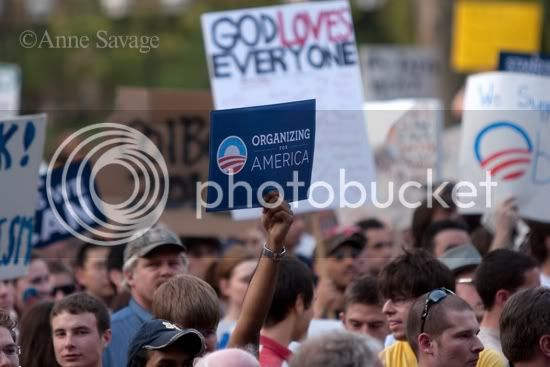 More photos from the Tea Party by my friend Pam HERE including one on the Mad Hatter Tea Party guys and their “bloody crumpet” sign.

Become a Facebook Fan of Anne C. Savage Photography by clicking the button below: