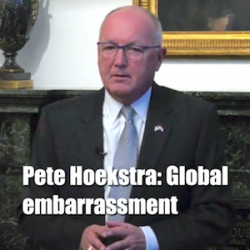 Following on the heels of an encounter with a reporter in the Netherlands where he gaslighted the reporter twice in the span of a couple of minutes, former Michigan legislator Pete Hoekstra held a press conference and things went decidedly “not well”. Hoeksta, the U.S. ambassador to the Netherlands, confronted this time not by just one reporter but multiple reporters, […]

END_OF_DOCUMENT_TOKEN_TO_BE_REPLACED 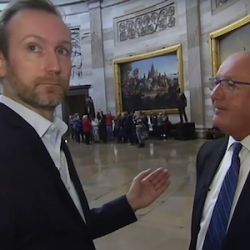 Wait, what…? People in Michigan won’t soon forget the man who arguably ran the most incompetent Senate campaign in our fine state’s history. His “Yellow Girl” Superbowl ad tanked his already lackluster campaign and then Hoekstra spent the next nine months digging the hole he was in deeper and deeper. In pure Trumpian fashion, Hoekstra has now ascended to the […]

END_OF_DOCUMENT_TOKEN_TO_BE_REPLACED Pete Hoekstra, he of the catastrophic “Yellow Girl” anti-China campaign ad that all but destroyed any chance he had of competing against Senator Debbie Stabenow in November, has now sealed his fate. How? By pretty much guaranteeing that he won’t get any women to vote for him.

During a campaign stop yesterday, he was asked about the Lilly Ledbetter Act, the law that allows women to sue companies if they pay men more than women for the same job. Hoekstra responded that it shouldn’t be the law.

The Death of a Campaign: Pete Hoekstra continues to pay for his racist campaign ad

Karma’s a bitch, eh, buddy? Pete Hoekstra’s “Debbie Spenditnow” Superbowl ad is the gift that keeps on giving. To Democrats. Poll results over the past few weeks show Hoekstra sinking like a rock: Image/data from Talking Points Memo Polltracker This week, he got more good tragic news for his campaign: among registered voters, Stabenow now leads Hoekstra 53% to 32%. […]

END_OF_DOCUMENT_TOKEN_TO_BE_REPLACED

Now let that be a lesson to you The 21-year old actress that was in Pete Hoekstra’s racist campaign ad, described in his now-defunct website’s code as “Yellow Girl” (which their web team disingenously/laughingly describes as “a typo”), has apologized. Via the Angry Asian Man blog: The 21-year-old actress just released the following statement on her Facebook page expressing regret […]

END_OF_DOCUMENT_TOKEN_TO_BE_REPLACED

Pete Hoekstra pulls racist website down, Debbie Stabenow raises over $150K from it

Debbie Stabenow: 1, Pete Hoekstra: 0 After the devastating news coverage of the past week over the racist ad and website put up by Pete Hoekstra, he has now redirected the Chinese-themed www.debbiespenditnow.com to his own website www.petespenditnot.com. The YouTube video is still up, however, with over a million views. Comments and ratings are still turned off for the very […]

END_OF_DOCUMENT_TOKEN_TO_BE_REPLACED

Lies, damn lies. Take your pick. The racist ad by Senatorial candidate Pete Hoekstra was not just racist. It is based on a complete lie. Here’s what is said in his ad by a woman who is clearly faking her Asian accent in what Hoekstra is calling “satire”: “Thank you, Michigan Senator Debbie Spenditnow. Debbie spend so much American money. […]

END_OF_DOCUMENT_TOKEN_TO_BE_REPLACED

Pete Hoekstra gets the Funny or Die treatment

END_OF_DOCUMENT_TOKEN_TO_BE_REPLACED

The fallout continues Good to see the civil rights leaders and clergy of Michigan getting involved with decrying the racist ad put out on Sunday by Pete Hoekstra. The Rev. Charles Williams II and a coalition of clergy members are asking Hoekstra campaign contributor Quicken Loans to denounce the commercial and ask Hoekstra to pull it. Here’s their press release: […]