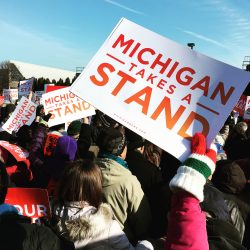 Thousands gather at Michigan rally to tell Congress: ‘Save our healthcare’

This was one of 70 rallies across the country today — and the first of many actions to come to protect and improve the Affordable Care Act. This was more than a great turnout. The response to the “Save Our Healthcare” rally in Warren, Michigan, was so overwhelming the event had to be moved to a larger venue than the […]

END_OF_DOCUMENT_TOKEN_TO_BE_REPLACED On September 29th, conservative Republicans in Congress spent over five hours interrogating and badgering Planned Parenthood CEO Cecile Richards over selectively edited video that distorts the truth about what Planned Parenthood does. Despite being treated shabbily by the men on the committee she testified before, often interrupted and prevented from answering questions, she handled it with finesse and aplomb. Yesterday, […]

END_OF_DOCUMENT_TOKEN_TO_BE_REPLACED During the travesty that was the Congressional hearing on Planned Parenthood this week, there was plenty of disgusting hypocrisy coming from the Republican side of the aisle. But the winner of the Most Disgusting Hypocrisy Award has to go to my own Congressman, Tim Walberg (MI-07). As he began his remarks and interrogation of Planned Parenthood president Cecile Richards, he […]