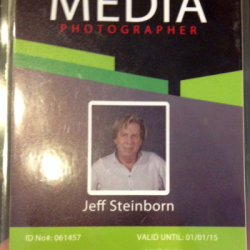 Good to see that Jeff Steinborn, the Snyder campaign videographer/photographer busted for impersonating a CNN reporter at a Mark Schauer campaign event, is getting some well-deserved national ridicule. Here he is last night on The Ed Show being skewered by Ed Schultz: Relentless positive ineptitude?

END_OF_DOCUMENT_TOKEN_TO_BE_REPLACED Seriously? That’s the level you’ve sunk to? This past Saturday, a videographer working for Governor Rick Snyder posed as a CNN reporter while filming Democratic gubernatorial candidate Mark Schauer at a campaign stop in Coldwater. Schauer staffers questioned the man who showed them this homemade media pass: When asked where he was from, he pointed to his CNN hat. A […]

END_OF_DOCUMENT_TOKEN_TO_BE_REPLACED Wifeproud The American Journalism Review recently relaunched itself as a web-only publication, a major move for a major publication. The central article on the newly launched site is a piece by Jackie Spinner titled “‘Identity Crisis’ in Photojournalism”. It’s a terrific piece that discusses the new trend of major print media outlets shedding photographers and having their writers taking photos […]

END_OF_DOCUMENT_TOKEN_TO_BE_REPLACED REMINDER: The Senate’s “clean continuing resolution” to fund government is already a HUGE compromise by Democrats

Let’s stop this talk about Democrats refusing to negotiate and compromise. It’s a lie. [Photo credit: Chris Savage | Eclectablog] I am continuously astonished by how well Republicans are able to shape reality and perceptions. Honestly, with enough focus group work by Pete Luntz and poll-testing of messaging, they can convince Americans of nearly anything. The fact that our media […]

END_OF_DOCUMENT_TOKEN_TO_BE_REPLACED

Don’t feed the seagulls. Last Thursday, Democratic candidate for governor Mark Schauer ventured into the lion’s den and made a campaign appearance in conservative Howell, Michigan in Livingston County. From the reports that I’ve seen, over 100 people showed up which is remarkable because (a) we’re still 13 months out from the election and (b) there are people who would […]

END_OF_DOCUMENT_TOKEN_TO_BE_REPLACED LOLGOP takes to the airwaves Our good friend Christine Barry from Blogging for Michigan has had to step down from participating in the Blog Role segment on the Night Shift with Tony Trupiano radio show on Thursday nights at 8:30 p.m. ET. Taking her place is our very own LOLGOP. His first segment was last Thursday while I was camping. […]

END_OF_DOCUMENT_TOKEN_TO_BE_REPLACED As I announced earlier this year at the Netroots Nation conference in San Jose, California, in 2013 the conference will be held at the Cobo Center in downtown Detroit. This will be an incredible shot in the arm for the city as thousands of progressive organizers and organizations come to Detroit for several days to share ideas and strengthen their relationships. It will also be a tremendously energizing moment for the many Democratic campaigns that will be in full swing next summer as we head into the final months of the 2014 election cycle.

This clearly has corporatist, Republican-supporting groups freaked out. They want to keep Michigan in the hands of their well-funded Republican legislators for as long as possible and the thought of losing the House or, even worse, having corporatist poster child Rick Snyder removed from office must give them cold sweats at night.

As part of their response, the Virginia-based Koch brothers front group the Franklin Center for Government and Public Integrity wrote an opinion piece for the Detroit News titled “Netroots nation comes home to the unions’ roost”. Click through where I unpack the myriad lies and the blatant anti-union propaganda in this offensive op-ed. END_OF_DOCUMENT_TOKEN_TO_BE_REPLACED Grassroots power in action! NOTE: This post has been updated. See below. A little under two weeks ago, my pals that run the Facebook page Save Michigan’s Public Schools announced a rally to support education and teachers in Michigan. Their page is the premier online resource for all things education in our state. It was started by Ann Arbor educator […]

END_OF_DOCUMENT_TOKEN_TO_BE_REPLACED

Shaping the news to fit their own twisted worldview

Glenn Beck, Sean Hannity and virtually the entire conservative news/noise machine were lit up today with the news that the Arab national they erroneously described as an FBI “person of interest” was quietly being deported back to Saudi Arabia under questionable circumstances. It started last night when Fox News “expert” Steve Emerson said on Sean Hannity’s show that the young man was being deported. That turned out to be completely false.

Click through for Homeland Security Director Janet Napolitano’s complete and utter shredding of a GOP Congressman who bought Beck and Hannity’s lies (and much more.)

END_OF_DOCUMENT_TOKEN_TO_BE_REPLACED

Tony Trupiano is BACK, Jack!

A progressive gift to Michigan returns to the airwaves

I have been woefully remiss in not writing about the disappearance of our beloved progressive voice of the Michigan radiosphere, Tony Trupiano (probably because it was too painful to contemplate.) Right before the holidays, the radio station that he was on was closed by Clear Channel and with it went Tony’s show, First Shift with Tony Trupiano. Though it wasn’t a political move by all accounts, it was a huge loss to Michigan progressives.

Thankfully, after some hard work and what I can only imagine was a great deal of anxiety and heartburn, Tony has landed an evening show on 1130 AM WDFN. The show, called “Night Shift”, will stream via iHeart radio from 7-8 p.m. and then be on “regular” radio as well from 8-10 p.m. You can read Tony’s piece on this HERE.

There’s more after the jump.

END_OF_DOCUMENT_TOKEN_TO_BE_REPLACED