END_OF_DOCUMENT_TOKEN_TO_BE_REPLACED

As ALEC ramps up its opposition to EPA regulations through state Attorneys General, Bill Schuette is their poster child

Corporatism is alive and well in state governments across the USA The Guardian newspaper has a blockbuster piece out today that shows how the American Legislative Exchange Council (ALEC), has turned to working through state Attorneys General to stop any efforts by the Environmental Protection Agency (EPA) to regulate greenhouse gas emissions. The Guardian has learned that the American Legislative […]

END_OF_DOCUMENT_TOKEN_TO_BE_REPLACED 2 years ago Dexter was a record-breaking 75F and hit by a tornado. This week, we hit a record low with record snowfall.

Global climate change, global schlimate change The day before the Dexter Tornado hit Dexter, Michigan on March 15, 2012, Anne and I were installing a new garage door opener in shorts and t-shirts. Swarmed by mosquitoes, we were forced to slather up with bug spray because it go so bad. The next day, after hitting a record-breaking 75 degrees, we […]

END_OF_DOCUMENT_TOKEN_TO_BE_REPLACED

Petcoke from Canadian tar sands piling up in another urban US city: Chicago

Funny how it’s never near a posh neighborhood of mansions… Cloud of petcoke dust rises over Detroit in the summer of 2013 This past summer, thanks to the hue and cry from Democrats in Michigan as well as Detroit Mayor Dave Bing, a group owned by the notorious Koch brothers was forced to take their noxious, toxic piles of petcoke […]

END_OF_DOCUMENT_TOKEN_TO_BE_REPLACED The economic impacts of climate change aren’t something for the future, they’re here NOW

How can you deny what’s in front of your eyes? [CC photo credit: Michael McCullough (ex_magician) | Flickr] In the mid-1990s, an outbreak of pine mountain beetle infestation began in the western United States up through Canada and has decimated a truly phenomenal number of forests. In Colorado this year, an estimated quarter million acres of forest are affected, down […]

END_OF_DOCUMENT_TOKEN_TO_BE_REPLACED I pledge allegiance to flag of the Corporate State of America… State Attorney General Bill Schuette’s job is to be the top law enforcement official in Michigan. As part of that job, his role is to protect the health and safety of Michiganders. Apparently he didn’t get the memo. Schuette has sued the Environmental Protection Agency to keep them from […]

END_OF_DOCUMENT_TOKEN_TO_BE_REPLACED

Last week, the BlueGreen Alliance announced the launch of its “Repair America” campaign designed to push action on repairing crucial national infrastructure across the country and create thousands of valuable jobs in the process. The BlueGreen Alliance is a partnership of labor and environmental groups working to expand the number of jobs in the renewable energy sector. Over 100 people […]

END_OF_DOCUMENT_TOKEN_TO_BE_REPLACED

What could possibly go wrong?

On the banks of the Detroit River, giant three-story tall mountains of black rock have been accumulating, quickly and quietly enough to take a lot of Detroiters and neighboring Canadians by surprise. The piles are petroleum coke or “pet coke”, a by-product of the processing of tar sands oil from Canada. A newly upgraded Marathon Petroleum refinery in Detroit now allows them to process the tar sands oil, producing copious amounts of the high-sulfur, high-carbon waste product.

A recent New York Times article shows that Michiganders and Canadians alike are concerned by the use of land directly on the Detroit River to store the potentially hazardous pet coke.

END_OF_DOCUMENT_TOKEN_TO_BE_REPLACED

Good thing there’s no such thing as climate change or Michigan would have to dredge 58 harbors. Oh. Wait.

At what point does climate change denial become a mental illness?

The Great Lakes are now at historically low levels. So low, in fact, that Governor Snyder was forced to prevail upon the legislature to pass emergency funding to dredge 58 harbors and bays so that ships and recreational vessels can continue to use them.

Yet, somehow, the corporate-funded climate change deniers still have a voice in what is no longer a debate about the reality of global climate change.

END_OF_DOCUMENT_TOKEN_TO_BE_REPLACED 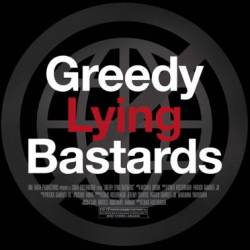 Pay no attention to the Koch behind the curtain

Greedy Lying Bastards is a new documentary released to theaters this past week that reveals the intentional, corporate-funded deception campaign that has shaped our conversation about climate change in profound and dangerous ways. While it’s long been known that the fossil fuel industry — “Big Oil” — has been throwing up a smokescreen (pardon the pun) to confuse the debate over the existence of human-caused climate change, Greedy Lying Bastards picks up where Al Gore’s An Inconvenient Truth left off to show us just how deliberate and well-funded this effort has been.

Click through for more including clips from the film.