Trump WANTS liberals to mock his NFT cards. And they are falling for it. 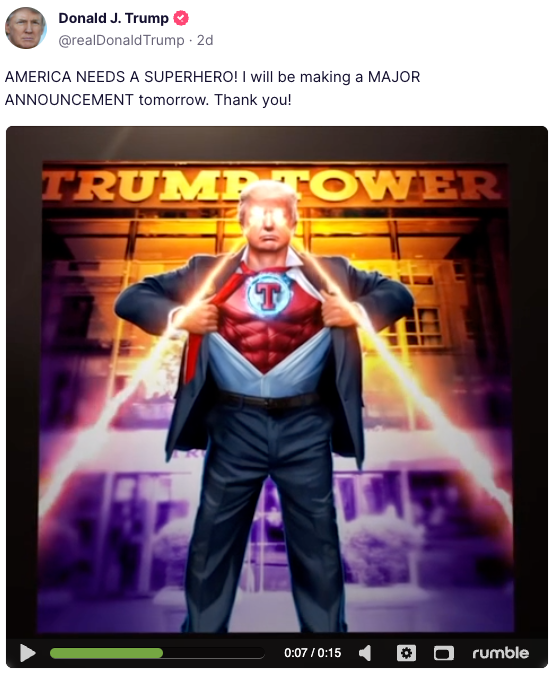 This screenshot doesn’t show the video that plays in its entirety where he declares that “America needs a superhero”. (One thing that’s glaring obvious is that he is still burning with the heat of a thousand suns with jealousy of Joe Biden’s “Dark Brandon” memes which flew around the internet in the lead up to the midterm election.)

The announcement turned out to be new NFT “playing cards” (or “digital playing cards” as he called them) with Trumps face comically Photoshopped onto various superhero bodies. The grift was successful, of course, with his sycophantic followers quickly buying up the entire collection, raising nearly four and half million dollars for the superconartist.

Around the country and around the world, the effort was mocked.

But let’s be perfectly clear: Trump does not care if liberals or pundits think his NFT cards are stupid and inane (hell, even Steve Bannon does.) Because, in the final analysis, not only is he $4.45 million richer from the sham, EVERYONE is talking about him on Twitter, a social media platform he doesn’t even participate in. He’s getting attention and that’s what feeds his corroded, putrid ego.

And we all fell for it. We (yeah, including me) retweeted some form of the news, usually a screenshot or even his announcement video. Far and wide, liberals spread his message far and wide.

He is good at this, folks. And he’s not going to stop.