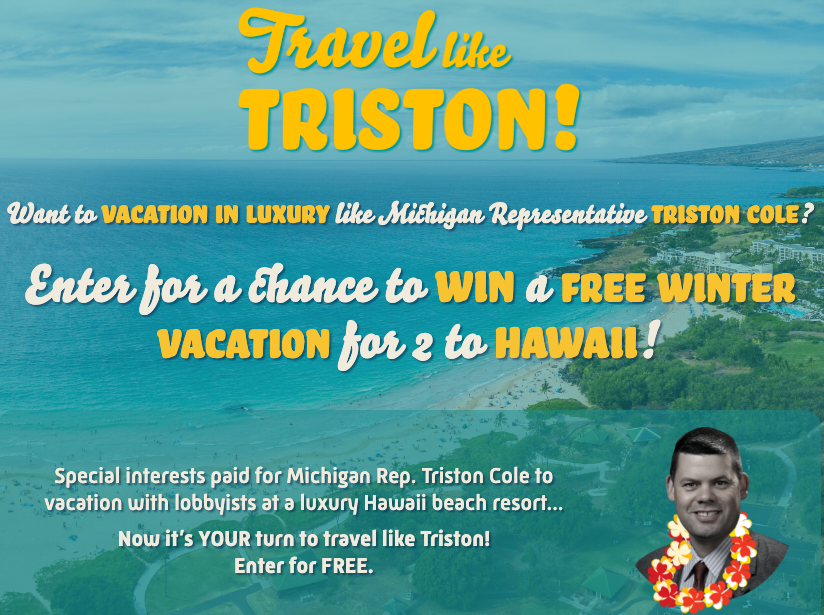 In 2018, multiple prominent Michigan Republican legislators flew to Hawaii on at least two separate occasions, paid for by the California-based Institute for Research on Presidential Elections. As reported by Bridge Magazine, the trips, which also included trips to Puerto Rico and elsewhere, were part of an effort to change the way our presidents are elected:

More than 20 Michigan Republican lawmakers traveled to Hawaii, Puerto Rico and other vacation spots in the past two years where, on one day, they attended a seminar sponsored by a California group pushing to change how Michigan awards its electoral votes for president.

Triston Cole, a Republican House member from the Traverse City area, currently running for state Senate, was among those who enjoyed the free trip. Because the trip was labeled as “educational” rather than as a lobbying effort, very little is known about what happened at the seminars. According to Bridge Magazine, “while the institute itself doesn’t lobby, a sister nonprofit, the National Popular Vote, is registered to lobby in Michigan.”

As Bridge Magazine points out, the “educational effort seemed to have its intended effect of swaying Republicans to get behind changes that have largely been supported primarily by Democrats over the years:

When a Senate bill to have Michigan join the national popular vote compact was introduced back in 2015, only five Democratic senators and zero Republicans signed on as sponsors.

In 2018, 11 Republican senators and 10 Democratic senators signed on as sponsors.

A non-profit accountability group calling itself Liberty Group, Inc. is now sponsoring a sweepstakes to send the winner on a trip to Hawaii of their own and to “travel like Triston!”. From their press release:

Residents of Northern Michigan have the chance to live the lavish lifestyle of local politician Triston Cole, with a sweepstakes that will send the winner on a vacation for two to Hawaii similar to one special interests bought for Cole while he served in the State House.

The “Travel Like Triston” sweepstakes is free to enter for all Michigan residents and will run from Friday, July 21 to Friday, August 12. Residents can visit www.travelliketriston.com to enter.

Cole, currently running for election to the Michigan State Senate to represent the new District 37 (Mackinac, Chippewa, Cheboygan, Emmet, Charlevoix, Antrim, Leelanau, and Grand Traverse counties), took a lavish, special-interest-funded trip to Hawaii in 2018 while serving in the State House. A special interest group paid the way for Cole and fellow Michigan Republicans to attend a “seminar” with lobbyists in Hawaii at a luxury resort.

The special interest group, California-based Institute for Research on Presidential Elections, works with lobbyists trying to change Michigan law so that the state’s Electoral College votes are awarded to the winner of the national popular vote – not the winner of the state’s popular vote. And just weeks after Triston Cole met with these lobbyists on his Hawaiian vacation, he co-sponsored a bill to this effect. Many political observers note that such changes are likely to advantage Democrats in presidential elections.

The “Travel Like Triston” sweepstakes winner will be chosen on August 19, 2022, with the winner receiving travel and lodging for two at the Westin Hapuna Beach Resort in Waimea, Hawaii, the hotel used by the special interest group who funded Cole’s trip.

The effort is clearly designed to draw attention to Cole’s participation in this trip and expose his self-dealing in the lead up to the November election.