Pre-registration for this FREE event is required. Click HERE to register.

In his recent important essay “Can Democracy Survive Racism as a Strategy?“, Professor Ian Haney-López makes the case that the future of democracy in America lies in the future success of the Democratic Party. With Republicans showing daily that democracy is no longer a bedrock value for their party, it is up to Democrats to making the essential changes needed in America to protect democracy in our country.

But, there’s are big problems for Democrats, he says. First, “Major hurdles facing the Democratic Party include the disproportionate power of rural states, gerrymandered districts, voter disenfranchisement, the composition and rules of the Senate, and other factors.”

Another looming issue is that Democrats are not unified in their approach, diluting their impact and ability to communicate with the voters they need to persuade to vote for their candidates. “The Democratic Party is famously bad at communicating a unifying story about its vision for society,” he writes. “Indeed, Democrats all too often campaign as if their opponent is another faction of their own party rather than the Republicans.”

Prof. Haney-López also says there’s an internal battle in the Democratic party between the “Race Left” and the “The Colorblind Left”.

The Race Left group almost exclusively focuses its message on the systemic racism in America and the role many of us play, often unwittingly, in keeping it in place. This has the unsurprising result of alienating some of the very voters we need to win:

[C]ondemnations of widespread white racism communicate to white voters you’re part of the problem, part of the group that originated, perpetuated, and still benefits from injustice. Racially progressive white voters are willing to see themselves that way. But the vast majority recoil. […]

Simultaneously, this story says to people of color, you’re victimized and hated by the dominant group in this society. Activists and those whose educations have stressed the history of racism in America often accept this self-conception. But many voters of color do not, especially professionally accomplished minorities as well as immigrants.

The Colorblind Left group seeks messages that deliberately exclude mention of race in order to “(1) resist being baited into responding to Republican dog whistling, and (2) [seeking] to deny Republicans more ammunition by distancing themselves from civil rights and efforts at racial repair.”

The answer to bridging this internal divide in the Democratic Party, according to Prof. Haney-Lopez, is what he calls “Race-Class Fusion Politics”:

Race-class fusion politics frames racial conflict as a divide-and-conquer strategy that threatens us all, people of every race and across the broad economic spectrum. The real enemy we all face, fusion politics says, is those who profit by intentionally stoking racial division. The Trumpist politicians fueling group hatred; the media personalities like Tucker Carlson harping on the “great replacement theory” lie that Democrats seek to displace white voters with ever more people of color; the dark money think tanks that promote attacks on affirmative action, welfare, and more recently critical race theory. These are the real enemies we face. And by naming them as such, Democrats can shift the basic us-them conflict in American politics. The core opposition in American life is not between white people and people of color, fusion politics says. It’s us all, against those who profit by promoting social strife.

Those of us who have taken a deep dive into the data-driven Race-Class Narrative messaging approach developed by Prof. Haney-López, Anat Shenker-Osorio and others know that this is a winning strategy. 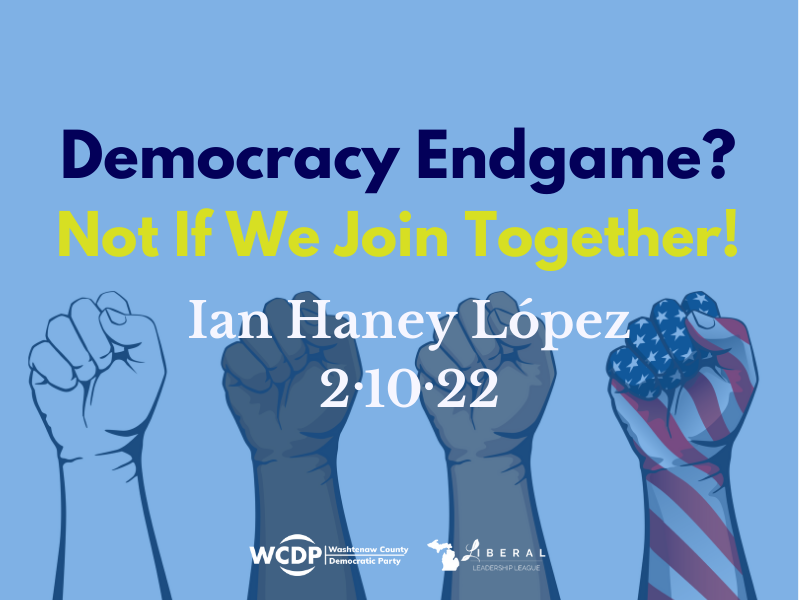 If this intrigues you and you want to learn more about how to work together to build a cross-racial coalition that can save American democracy, join us on Thursday, February 10th at 6 p.m. for a 90-minute virtual event with Professor Haney-López titled “Democracy Endgame? Not If We Join Together!” The event is free and requires preregistration (HERE.) Before the event, be sure to check out our Resource Guide to help you get the most out of it. You can find that HERE.

This event is co-sponsored by the Liberal Leadership League and the Washtenaw County Democratic Party.