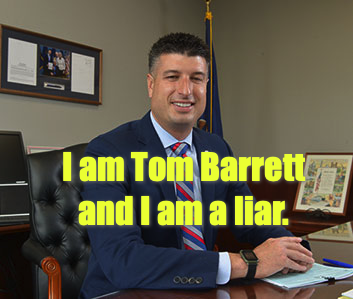 Michigan state senator and former state representative Tom Barrett has declared his candidacy to run against Congresswoman Elissa Slotkin in 2022. He’s a natural choice for the Republicans because he’s a member of the Army and Slotkin’s military bona fides are virtually unassailable.

Actually, I should say Barrett WAS a member of the Army because he has resigned over the federal government’s COVID-19 vaccine mandate for members of the military. In an op-ed for The Detroit News, he says “President Joe Biden thinks I’m no longer good enough for the Army,” for refusing the vaccination.

Barrett has been against pretty much every protective measure put in place to stop this terrible virus at both the state and federal levels. He was against mask mandates for school kids. He was was for the so-called “Unlock Michigan” initiative which resulted in stripping away Governor Gretchen Whitmer’s emergency powers during a pandemic. Even after he got COVID-19 himself, he continued to push back against virtually any effort to stop the pandemic.

The question for me is whether or not Tom Barrett is a hypocrite or a liar. I say this because Barrett was required to receive no fewer than NINE vaccinations just to be a member of the military and, because he was deployed to “the Korean DMZ, the cell blocks of Guantanamo Bay, [and] the desert sands of Iraq” according to his op-ed, he would have needed another EIGHT vaccinations for that.

17 vaccinations already but Tom Barrett refuses to get the COVID-19 vaccination. He could even get a waiver for any or all of them but he refuses to do that, as well, calling it “a career-ender”. Instead, he decided to end his own career and blame it on Joe Biden.

Barrett is either lying about why he’s quitting the military or he’s being hypocritical since he’s already received 17 vaccinations as a requirement for being in the military in the first place. I tend to lean toward “liar”. I think he’s using the COVID-19 vaccination mandate as a cover for quitting the military to pursue his political aspirations. Since his campaign is almost single-mindedly based on his military experience (his logo has the obligatory helicopter in it, for example), he’s got to blame someone else for it and Joe Biden is the best target he could find.

I feel pretty certain the Elissa Slotkin will beat Barrett handily. She doesn’t have to lie or be hypocritical about her background, career goals, or issues. She can just be her badass self, getting things done for her constituents and not playing political games.

Her authenticity is a great combination for a winning campaign.

There’s also the fact that she’s already raised nearly a million dollars this year and has $3.76 million in cash on hand.

[Hat tip to @AyeVeeGee on Twitter who first pointed out Barrett’s duplicity on vaccines for members of the military HERE.]