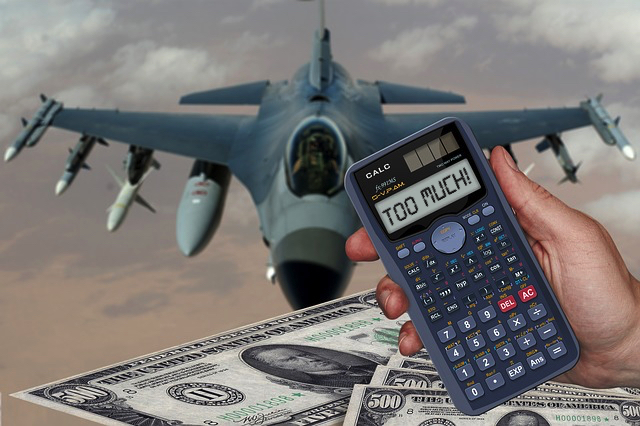 With the American war in Afghanistan now effectively finished and our military presence in Iraq and Syria all but over, you might think America would now be enjoying a peace dividend. This is, however, entirely NOT the case. In fact, Congress is set to pass one the largest military budgets in our nation’s history.

But it gets worse.

The Pentagon sent a budget request to Congress this year that was an eye-popping $715 BILLION. But, rather than trimming that back and asking them to make the sorts of concessions that are asked for every piece of legislation that could actually improve the lives of Americans, Congress INCREASED that amount to $740 billion.

When you add up America’s military spending, the total price tag comes to nearly $1.3 TRILLION. You can see where that money goes if you read a recent piece by Mandy Smithberger and William Hartung titled What Price “Defense”?. One of the most shocking revelations for me from that article is that our country has 17 intelligence agencies that all get a piece of that unfathomably large pool of money.

I spoke to Dan Grazier, the Jack Shanahan Military Fellow at the Project on Government Oversight (POGO), to get more insight into what seems like an endless military abyss that our country pours so many of our tax dollars into.

What became immediately clear to me is that the “military-industrial complex” that President Dwight D. Eisenhower warned us about in his farewell speech is still very much alive and well and consuming our tax dollars.

Along with the Pentagon’s request to Congress, they are mandated to provide them with an unfunded priorities list, as well. This is a “wish list”, of sorts, and includes all manner of extra spending. From that list, Congress picked out some items – to the tune of $25 billion – and granted the Department of Defense’s wishes.

What’s unique about military spending is that is almost literally the only area where bipartisanship exists. This bloated military budget isn’t a Republican thing. Democrats are in on it, too. There are several reasons for this.

First, almost all of that money flows to the military contractors like Lockheed Martin, Raytheon, and Boeing and those private corporations bring jobs and revenue into the communities where they exist. Members of Congress want them in their districts so they can point to all the money and jobs they’re bringing home to their constituents.

Second, in exchange for getting military contracts, these megacorporations shower lawmakers with donations.

Finally, there is a revolving door between federal and the military contractors that ensures that elected officials maintain their fealty to these corporations. They either take positions with them after they leave office or they leave the companies and take positions in government.

The website Military.com recently wrote about a General Accounting Office report that shows just how big a problem this is:

More than 1,700 former acquisition officials, general officers and other senior employees who left the Defense Department in recent years have gone on to work for major defense contractors, the Government Accountability Office, or GAO, found.

Watchdog organizations and lawmakers such as Sen. Elizabeth Warren, D-Mass., have raised concerns about the so-called “revolving door” of former DoD officials moving to defense contractors — in some cases, lobbying on issues they used to work on for the government.

It goes the other way, as well. Frank Kendall, the former Vice President of Engineering for Raytheon Company and, more recently, a Managing Partner at the Virginia-based aerospace and defense sector consulting firm Renaissance Strategic Advisors, was Air Force secretary just a couple of months ago.

When we’re not fighting actual wars, those who profit most from the bloated defense spending concoct other “enemies” for us to fear and prepare to fight. The current one, Grazier told me, is “the new cold war with China”. “That’s the new big threat,” he told me. “And they’re using it to goose Pentagon spending.”

If you want to be heard on this massive blackhole for our tax dollars, Grazier says the best way is to contact your U.S. Representative and Senators. In addition to asking them to rein in out-of-control defense spending, you should also ask them to support four specific amendments to the budget request that have been introduced:

A full list of the amendments to the House budget bill are HERE.