The Thin Clerk Line – The strongest line of election defense

Two weeks ago, I attended DEFCON for the third time. DEFCON is a conference where a group of mostly white-hat hackers and experts in various fields come together to determine best practice recommendations for shoring up vulnerabilities with web security and safeguards against malicious hackers.

This year, I was given the opportunity to speak at the convention in the elections area on a topic that has been front and center in the months leading up to and following the 2020 election: Election Conspiracy Theories. My discussion on ‘Hacking the Conspiracy’ covered many facets of the Big Lie and related conspiracies that were circulated and led many in America to question the integrity of our elections.

One of the key features of interest for me at DEFCON is always the Voting Machine Hacking Village, where they attempt to hack into the tabulators and election equipment to show how someone looking to gain access to these devices might do so. 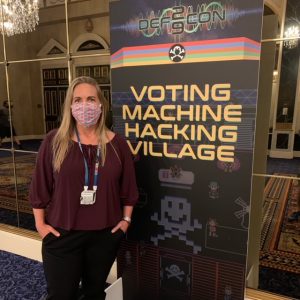 One of the many takeaways that I came away from my time at DEFCON was how important our local poll workers are to ensuring the safety and security of the elections in any given area. They are our strongest and longest serving line of defense on Election Day.

What I witnessed at DEFCON was a group of hackers who got under the hood of the tabulator, connected to the computer inside, and transformed it into a machine that was able to be used for games (like Pong!) rather than to tabulate votes. While this certainly did raise some concerns, I was encouraged by two points.

First, the hackers were unable to get to the tabulators through the internet. I knew this to be true going into the convention, as tabulators like those used in Michigan, cannot be connected to the internet during ballot tabulation. Only some are capable of connecting after tabulation and the paper record is printed. Either way, in Michigan paper ballots are used and are always a safeguard against any possible interference.

Lastly, the process of connecting to the tabulator involved taking apart the outer casing of the tabulator and getting at the motherboard and various ports in the machine. Essentially, this looked like disassembly of the tabulator. As I mentioned previously, our poll workers are our most important line of defense, and they would never allow anyone to deconstruct the tabulators in this way and gain access to them on Election Day.

Poll workers are trained to ensure that voters and the public are not able to access the tabulator in an unauthorized manner, including plugging in drives, standing around the tabulator after their ballot is read in, and opening the outer shell, as well as many more. I also want to point out that these tabulators have tamper-evident seals protecting the access to ports and motherboards. The seals are placed on the machines before Election Day after the equipment programming is tested to confirm it is reading the ballots correctly, and poll workers verify that the seal numbers have not changed before opening the polls.

After having been reminded just how important these roles are, I would ask that you please consider serving as a poll worker in a precinct for your local clerk.  The pay is not great but knowing that you played a vital role in ensuring the safety and security of democracy will last a lifetime.