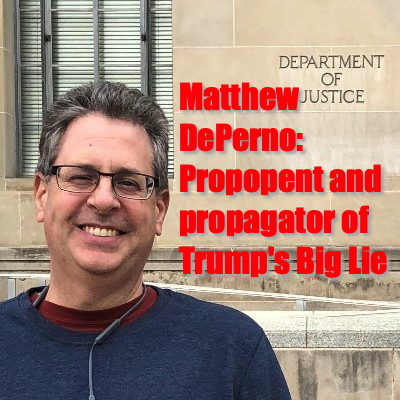 The headline in the Detroit News on July 15th read “Michigan election critic says he’s running for attorney general.” Matthew DePerno is no mere election critic. He is one of the lawyers responsible for propagating the Big Lie and is suing Antrim County in an effort to overturn the election results in Michigan.

Two weeks ago, the Republican-led Michigan Senate Oversight Committee put out a report indicating that there was no systematic fraud with regard to the November 2020 General election. They went further, however, to recommend that the Attorney General investigate those who have exploited the concern around the November election for personal gain. Attorney General Dana Nessel recently said that she would be conducting an investigation but did not specifically call any one person or organization out.

I submit that Matthew DePerno must be one of the people who would be at the center of any such investigation, as he opened a legal defense fund and has been encouraging his followers to contribute all in the name of promoting these baseless election conspiracies. Perhaps he thinks that by running for Attorney General, AG Nessel will be less likely to investigate him.

But his efforts did not stop with his attacks on Antrim County. On July 14th, he authored a ‘cease and desist’ letter that was addressed to a state-wide vendor aimed at stopping local and county clerks from having their tabulators cleaned for fear that somehow election information from eight months ago would be disturbed. Never mind that pursuant to Michigan Election Law and federal regulations, poll books are retained for 2 years and ballots are safely retained for 22 months after certification and applications to vote are retained for six years after Federal Elections. Pursuant to the standard election retention schedule that clerks at the local and county level use, ballots, applications to vote, and poll books are all retained.

Oh, and by the way, the preventative maintenance that is being done (cleaning, dusting, changing batteries) does not erase information from the tabulators. AND the ICX machines that are being cleaned are not even tabulators, but rather ballot marking devices for those that need assistance (visually impaired, mobility issues, etc.) or prefer the use of the touchscreen.

Disclosure: I felt compelled to correct the record on those claims.

Then, as if peddling conspiracy theories was not enough, he felt compelled to try to mansplain my job to me, as if I did not have 9 years and 28 elections as County Clerk under my belt. I understand elections administration quite well, and some might even consider me an expert after numerous accreditation and continuing education courses, and a national certification.

And he also made comments about how much he likes my picture.  Careful, Matt… Voters know a creep when they see one.

I am worried that our democracy is at risk.  Gone seem to be the days when the losing candidate would shake the winning candidate’s hand and move on.  Good Americans are buying into these conspiracies. The line in the sand has been drawn.  I can no longer look the other way and expect others to counter such false election conspiracies.  I will continue to stand up and speak out in support of the integrity of our elections and those dedicated election administrators who are working hard on the frontline to carry out democracy.