REPORT: Republicans in Michigan are STILL clinging to the Big Lie 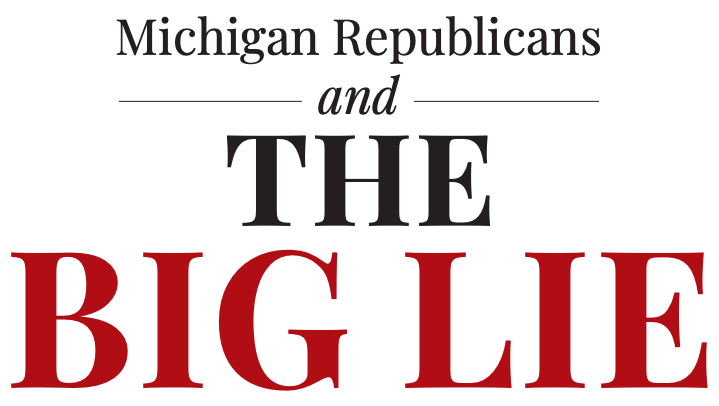 The great progressive advocacy group Progress Michigan has completed a thorough investigation into Republican County Parties in Michigan and has discovered that over 60% of them have pushed Donald Trump’s Big Lie that the election was stolen from them. Even in the past two months eleven of these County Party groups have posted about it on social media.

Here are a few “highlights” from the report, titled Michigan Republicans and the Big Lie – How Michigan Republican County Parties are still hanging onto the myth of election fraud, which was based on an investigation of public comments and social media posts from November of 2020 to June of this year:

I spoke with Progress Michigan Acting Executive Director Sam Inglot and he told me that the numbers would have been even more shocking if they had included posts and comments from Michigan Republicans who weren’t party officials. “The people at the top of the Republican Party claim that they have moved on,” Inglot said. “But it’s very clear from our analysis that the grassroots of the Party is still holding on to it. This is an issue that the Michigan Republican Party clearly needs to solve if they have any chance of remaining a legitimate political party in upcoming elections.

Much of the rhetoric has morphed more recently into calls for “election integrity” despite the fact that hundreds of audits in Michigan alone have shown that the 2020 election was safe, secure, and accurate.

In 2022, Michigan will have new legislative and Congressional maps, redrawn by an independent redistricting commission. With these more fair maps, Republicans will need to attract new voters who are likely less extreme than their current gerrymandered base. If they continue to cling to the Big Lie, they have little chance of swaying moderate conservatives to vote for them and will find themselves in an extremist hinterland, a small bubble of an echo chamber, endlessly claiming that what is true is not.

I firmly believe that our country is better when we have two legitimate political parties vying for leadership. That push and pull makes our republic stronger and more responsive to the electorate. We are so far from that right now that I am not optimistic it will happen in my lifetime.

In the meantime, the Michigan Republican Party is led by two extremists in their own right: insurrectionist Meshawn Maddock and multimillionaire Ron Weiser. The idea that these two will show the leadership needed to return their Party to legitimacy is almost laughable at this point.