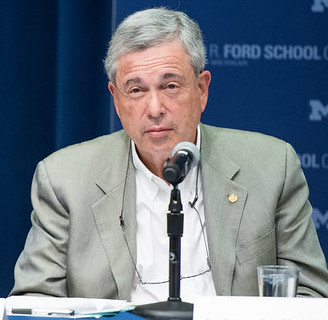 As Michigan Republican Party Co-Chair, Ron Weiser paid off Stan Grot to drop out of the Secretary of State race in 2018 so his preferred candidate, Mary Treder Lang, could run unopposed. Grot was paid $200,000 in a series of payments from the state Republican party’s coffers which were later revealed by past Chair Laura Cox. Cox described the arrangement at the time as a “sleazy payoff” and filed a complaint with the Michigan Bureau of Elections. I don’t often agree with MIGOP Chairs on much of anything but Cox is spot on in this situation.

The matter has now been settled. Weiser, who is a very rich man, ponied up $200,000, pocket change for a multi-millionaire, possibly a billionaire, like him.

By paying the $200,000 himself, Weiser let the Michigan Republican Party move without having to admit wrongdoing or guilt.

See? If you’re wealthy enough, “problems” like this can be made to just go away…

The silver lining to this disgusting series of events is that Weiser’s candidate,, Mary Treder Lang, was soundly trounced by the amazing Jocelyn Benson in the 2018 general election.

Also, if you are a Republican contemplating a run for statewide office, you now know how much you might make if you decide to take a buyout from Ron Weiser: $200,000.

ICYMI: Weiser establishes the dropout floor at $200,000. Is he going to pay this much to Soldano, Dixon, Kelley, Rebant, Scott, and Chenge to clear things for Craig? #MIgov https://t.co/nCUoxOlPnn