On a hot day in early summer last year, there was a press conference held on the lawn of the Mason Historical Courthouse in Ingham County. It was being held by the Thomas More Law Center and was not terribly well publicized, at least not in mainstream media. Despite that, there were approximately three dozen people in attendance, including election-agitator Patrick Colbeck.

The announcement was that the Thomas More Law Center and their allies like the so-called Election Integrity Fund were ramping up efforts to preemptively oppose the efforts to ensure that every Michigander was afforded their right to vote.

For those who have never heard of the Thomas More Law Center, you might learn all you need to know by reading the tagline from their website “The Sword and Shield for People of Faith” or their slogan “Battle Ready to Defend America.” You might also learn from a news bulletin on their website that teachers are Islam’s Secret Agents. The is the sort of intemperate rhetoric that serves no purpose but to mislead and rile a certain group of people. 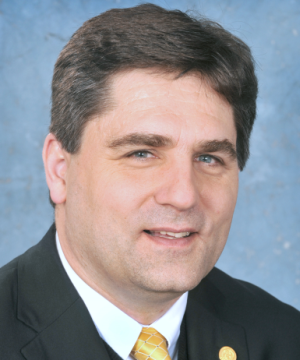 For those who may not have heard of Patrick Colbeck, he is a former State Senator, former Republican candidate for Governor, and author of legislation that would take Michigan’s social studies curriculum and turn it into a reactionary Republican’s dream, including removing the word ‘democratic’ when referring to our form of government because it ‘felt too partisan’ and eliminating negative references to the Ku Klux Klan and positive references to the NAACP.

Michigan had blessedly been rid of Patrick Colbeck since his failed effort to become Governor in 2018, and I, along with many many others, were hopeful that he would fade into the night like so many other failed candidates. Alas, whenever the Republican Party needs a crackpot to rally the fringes of their base, there he is. And there he was, a policy advisor for the Election Integrity Fund, clapping away at the press conference.

What happened next was pretty well publicized. The wildly unpopular President repeatedly told those that consumed right-wing media that if he lost the election, it had to be fraudulent. Then he lost and claimed it was fraudulent. Then he tried to interfere with the Wayne County Board of Canvassers into failing to certify the results. Then he tried to influence Michigan’s Republican leadership into failing to certify the election and send the electors’ votes to the electoral college. Then he tried to get Mike Pence to reject electoral votes, illegally. And, in a final act of desperation, sent a violent mob to overthrow Congress. This is not political opinion, this is fact.

The election was over; the Michigan results were certified by 83 County Boards of Canvassers, the State Board of Canvassers, and then confirmed by 250+ audits and a state-wide Risk Limiting Audit.

Then, months later, Arizona decides to allow a third party group to “audit” its election results. I use quotation marks because what they are doing does not actually qualify as a professional election audit. So little care is being taken that one member is under fire for absconding with election data to Montana, and the machines that are being examined will have to be decertified due to their handling through this process, costing the taxpayers hundreds of thousands of dollars.

Who should resurface in Michigan to demand that we, too, let vigilantes rifle through our election equipment but Patrick Colbeck. This time he appeared with a group on the Capitol steps with several thousand affidavits demanding an “audit” in the style of Arizona. The group had reserved the space under the category of Prayer Event and Colbeck stood and told the crowd that it did so because demanding these audits was a “spiritual battle” the likes of which the world has not seen since Pontius Pilate.

But, like I said, this is not about Patrick Colbeck.

He is merely the face of the mob. If it were not him, it would be someone else. What Patrick Colbeck, Donald Trump, Mike Shirkey, Meshawn Maddock, and the Republican leadership at the state and federal level have done is foster a violent environment across the country.

A recent study from the Brennan Center says that 1 in 3 election administrators have reported that they do not feel safe in their jobs and nearly 1 in 5  listed threats to their lives as a job-related concern.

Higher profile elections workers like Brad Raffensperger, from Georgia, and his family have faced direct death threats. In Michigan, a County Clerk had an elected member of a school board hundreds of miles away threaten her dog and say that he had seen the inside of her house. The crowd at the rally that Colbeck attended called for clerks to be taken away in shackles.

As a result of this, career professional administrators and their staff are leaving the field entirely in droves. These are local and county clerks, many of whom have 20+ years of experience, who are unwilling to continue to put their safety on the line.

Make no mistake: When our clerks are under fire, our democracy is under fire.

This all begs the question of who will take over these jobs, who will run to become the next County and local Clerks. I worry that the very same people who are making the threats today will be running to do the job tomorrow. We are already seeing this at the State level, with a Republican candidate for Secretary of State traveling to observe the goings on in Arizona and with Trump acolyte Mellissa Carone running for the state legislature. It is not a big leap to imagine that they will come for election administrators’ jobs next.

If these election conspiracy theorists are elected to be charged with our elections, we will simply have the foxes guarding the henhouse, and our democracy is what will suffer.

So, I promised you that this was not a blog post about Patrick Colbeck, and it was not.

It is, however, about the environment that he and others within the Republican Party have created, nurtured, grown, and unleashed upon professional election administrators. The ones that simply endeavored to give every qualified, registered voter the opportunity to vote and who came under pressure and threatening circumstances because of him and his ilk.

Patrick Colbeck and the elected leaders of the Republican party must step up to the microphone and tell their grassroots activists that it is time to stand down. Stop the threats and stop the violence. The 2020 presidential election was fairly run, fairly won, and is now done. Failing to do so may get Patrick Colbeck what he wanted after all, an update to Michigan social studies curriculum removing references to America as a democracy.

Because we will have lost it.

OK, it was a little about Patrick Colbeck.