The following essay was written by Daniel Caracheo Teniente. Daniel is a senior at Davenport University in Grand Rapids and an Immigrant Rights organizer with Michigan United.

Since 2014, June has marked Immigrant Heritage Month in the United States. This month encourages us to reflect on our history as a nation of immigrants, appreciate the ways in which immigration enriches the state of Michigan, and acknowledge the need for justice that our undocumented families deserve.

This year, Immigrant Heritage Month includes an anniversary that serves as a sobering reminder of the ways in which our immigration system has failed our undocumented communities. June 15th marked nine years since the creation of the Deferred Action for Childhood Arrivals (DACA) program, which has allowed me and roughly 700,000 other Dreamers to live and work for two years at a time in the country we know as home. While I am fortunate to be protected from deportation as a DACA recipient, these protections are temporary and exclude millions of other hard-working undocumented people. 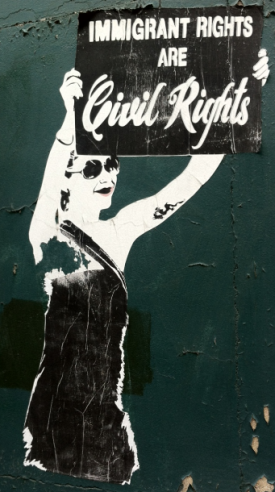 To make matters worse, DACA is also facing challenges from within the court system as anti-immigrant groups continue to look for ways to end the program. Currently, we are waiting to hear from a federal judge in Texas who is set to rule any day now on the future of the program, leaving our lives in limbo for a second time. The first ruling was on September 5, 2017, after the former president attempted to end the program.

I am American in all ways except on paper. Yet the failure to pass compassionate immigration reform puts me at risk of being ripped away from the community I call home. Until the day we have a pathway to citizenship for all, our communities will continue to live in fear of separation from their families and their communities.

I am a product of Grand Rapids, Michigan. This state has been my home since I was 5 years old when my family arrived here in 2005 from Celaya, Mexico. I am a Michigander at heart. I have been through the same experiences you have been through. I recall the first time I visited the state capitol during a school trip, my first walk through downtown Grand Rapids during Art Prize, watching movies at Ah-Nab-Awen Park with friends during the summer, and visiting the nature found across our great state. I am your neighbor, your classmate, your friend. We all know at least one person being affected by our flawed immigration system, even if they don’t publicly share it because our current system forces people to live in shadows and in fear.

I personally did not share my story publicly until I was in college. Before then it was something I shared only with my closest friends. But after the Trump administration attempted to rescind DACA on September 5, 2017, I was forced to step out of the shadows to speak out, share my story, and fight to remain with the friends and loved ones who made Michigan my home.

Undocumented and unafraid, I have dedicated the past couple of years to community service and advancing immigrants’ rights. I have helped register citizens to vote, assisted immigrant communities that were excluded from pandemic relief in connecting them with the sparse community resources available to them, interned with the Senate through the Congressional Hispanic Caucus Institute, and continue to fight to advance immigrant rights through my current role as an Immigrant Rights Organizer with Michigan United.

Until we pass compassionate immigration reform that includes a path to citizenship for all undocumented people, our current system will continue to keep harm millions of hard-working, undocumented Americans.

We contribute to our communities by paying taxes, creating jobs for American workers, and even serving in the U.S. armed forces, yet we lack the security and stability that our U.S.-born peers enjoy simply because we weren’t born here. Roughly 60% of all Dreamers — or 400,000 of us — are essential workers fighting on the frontlines of the pandemic.

A pathway to citizenship will lift millions out of poverty by allowing them to seek better employment and educational opportunities. DACA has given us a small glimpse of the positive impact this type of policy can have, but DACA is not enough.

Immigrants are as American as anyone you will meet; the U.S. is our home through and through, but only a pathway to citizenship can provide us with the certainty and stability we deserve. If DACA were to be terminated, people like me could be deported to unfamiliar countries that we do not remember, where we know no one, and whose language we might not even speak.

Hundreds of thousands of DACA recipients — and millions more immigrant families — who have built lives and families here have waited decades for meaningful immigration reform that puts us on a path to citizenship. Until that happens, we remain vulnerable to deportation, family separation, detention and exploitation. We have the power as a nation to address this urgent need and keep families like mine safe and together.

I encourage Senators Gary Peters and Debbie Stabenow — both supporters of DACA — to fight for a fair and humane immigration system that works for our modern world and prioritizes families. I ask everyone reading this to let our senators know, through calls or email, that you support this bill and you want them to be champions of immigrant rights. We simply cannot let this opportunity pass. Senators on both sides of the aisle must come together and pass the DREAM Act, not just because it’s good for our economy, but because it’s the right thing to do — both for our country, and for Michigan.