Why is GOP Congressman Tim Walberg hiding from his constituents? 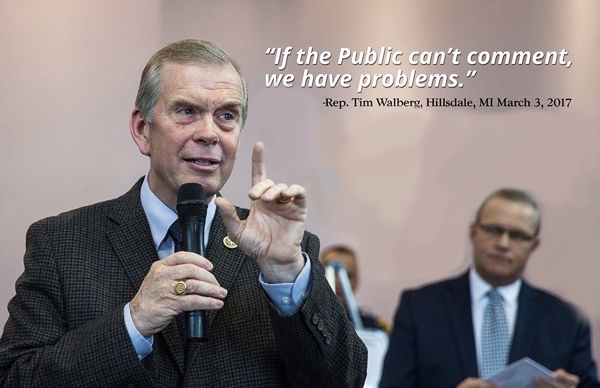 In March of 2017 at a public townhall meeting in Hillsdale, Michigan, Republican Congressman Tim Walberg (MI-07) told the audience, “If the public can’t comment, we have problems.” In the years since (and even before, frankly), he has made a Herculean effort to ensure that the only “public” who can comment at his public events are those he hand picks as supporters. Because, if there is one thing Tim Walberg cannot abide, it’s people publicly criticizing him for his actions and, often, his hypocrisy.

Recently, a friend of mine had seen some tweets from @TakeCareTim, the Twitter feed run by the amazing Steven Meyer who has doggedly been working to hold Walberg accountable for his actions on a wide array of issues for years. My friend wrote to me with this comment:

After Take Care Tim tweeted about the in-district event for Walberg tomorrow, I called the Jackson office to see if Rep. Walberg was doing any town halls or constituent events in Washtenaw County. The intern I spoke to told me, “No.” I asked if he was in the district this week and he told me, yes, he was.

I asked who would know, if not the district office? He said this is the right office. He told me it was his understanding that they were on the website. I told him that I had a hard time finding the constituent events on the Walberg.house.gov website and he helped me find them under the About Tim >> Events tab. But they were all in past.

I asked if there was a calendar of events that were in the future and he said he didn’t know. I could see that Rep. Walberg had a coffee hour in my hometown in early 2020, but that was the last one.

I explained to him that I have been a constituent since the Congressman took over for Joe Schwarz. I told him I get the email newsletters from the Representative, but they don’t seem to include information on future constituent events, only past events, which is not helpful for me as a constituent. I asked if there was any reason other than venue size or social distancing concerns why they wouldn’t tell folks about upcoming constituent events. He said he could think of a few, but it wasn’t his place to speak. He tried to end the call, but I made sure he took my name and full address so that it would help him pass along my concerns and suggestions.

This is not an unusual experience with Rep. Walberg. As Steven Meyer (and the intern) have pointed out, there is no way to find future events on his website. In fact, they recently changed the website to make sure it’s clear that only past events are listed:

As far back as 2019 and beyond, Steven was documenting Tim Walberg’s concerted efforts to hold public events where the audience was essentially hand-selected by his staff. This essential Twitter thread is a bit jaw-dropping:

Anyone who has ever attended a Walberg townhall knows that he generally has people write their questions on cards and then his staff pick the ones from his conservative supporters. In fact, at one in 2019, he made it explicit (audio is HERE). When asked what people can do to support him other than voting, he told the person asking the question, “Well, I think a good thing to do, is a number of things; one: a town hall meeting like this, invite your friends. I don’t know how many thousands of emails, etcetera we sent out. I leave that to my staff. But I don’t come to a meeting like this to have the smallest group that I can possibly have. That’s not my purpose. You can invite people, you can begin talking about it. You can let people know that there are people that think like them, that are out there, cause we’re feeling like, as conservatives, we’re all alone!”

Aside from the absurd notion that conservatives in the heavily gerrymandered 7th Congressional District of Michigan feel “alone”, it’s clear that from his statements and from his actions that Tim Walberg wants to avoid being asked tough questions at all costs.

Walberg has told some people who have questioned why he doesn’t announce his public events in advance that it’s because the Capitol Police and Sergeant at Arms have cautioned them not to. However, in an analysis conducted by Steven Meyer, it’s clear that this is certainly not the case: 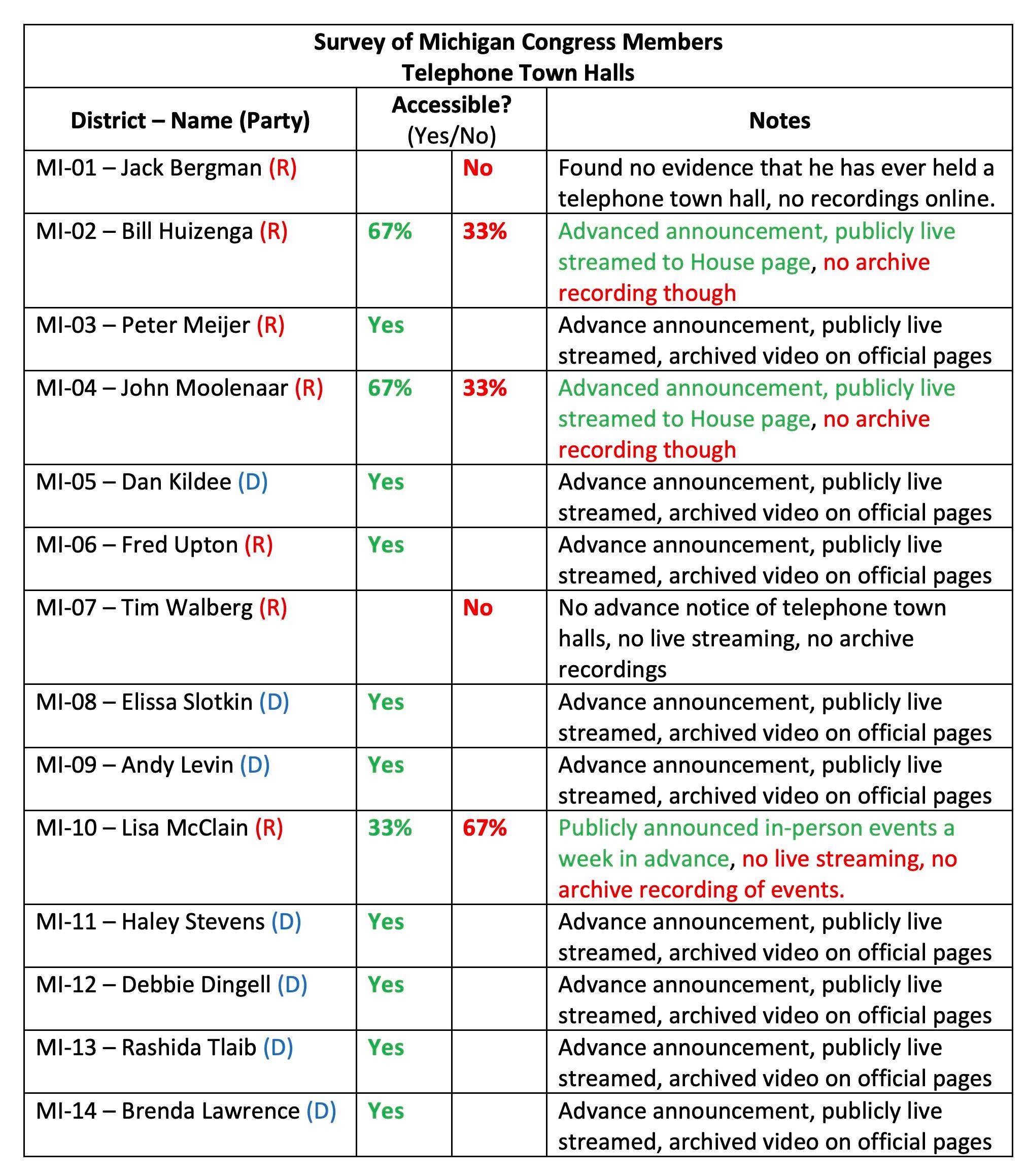 This clearly nonsensical excuse is just that: an excuse. All of the other Michigan members of Congress except Jack Bergman are holding public events that are announced in advance. And there is obviously no reason for the Congressman to feel there’s any threat from constituents during a telephone townhall.

At the end of the day, what is quite clear is that Tim Walberg does not have the courage to face constituents with whom he disagrees. He intentionally fills his telephone and in-person townhalls with friendly supporters and controls which questions he responds to. It is my prediction that, when the 7th Congressional District is redrawn, Tim Walberg will be in a far more competitive district. At that point, rather than actually having to work for votes and support, he will simply retire with his state legislature pension and his Congressional pension, taking his money and going home.