There is something about sitting behind a computer screen that seems to bring out the absolute worst in some people. And it’s even worse for people who are already in contention for being some of the worst people to begin with.

This week’s poster child for the worst being brought out in the worst comes to us from beautiful Grand Traverse County, the so-called “pinkie” of Michigan. The story starts last year when Grand Traverse County Commission Chair Rob Hentschel invited the Proud Boys to a Commission meeting to defend their reprehensible positions regarding guns and general fascism. In fact, Hentschel gave them far more time to spew their hateful speech than public comment rules typically permit.

At the Commission meeting this week, a member of the community spoke during the public comment time, asking Hentschel to publicly denounce the Proud Boys. What happened next is truly hard to believe:

East Bay Township resident Keli MacIntosh spoke during public comment about recent violence in the U.S. Capitol and the presence of Proud Boys at the event. MacIntosh asked Commission Chair Rob Hentschel to make a public statement denouncing Proud Boys, noting Hentschel oversaw a commission meeting last year about making Grand Traverse County a Second Amendment sanctuary county – a meeting at which Hentschel gave the Proud Boys time to present and defend their beliefs. MacIntosh said the commission’s tacit welcome of the group – and support for Michigan for 2A Sanctuary Counties Administrator Randy Bishop’s plan to “send a message” to lawmakers – emboldened some residents to participate in heavily armed protests in Michigan in 2020 and could contribute to further potential violence. […] 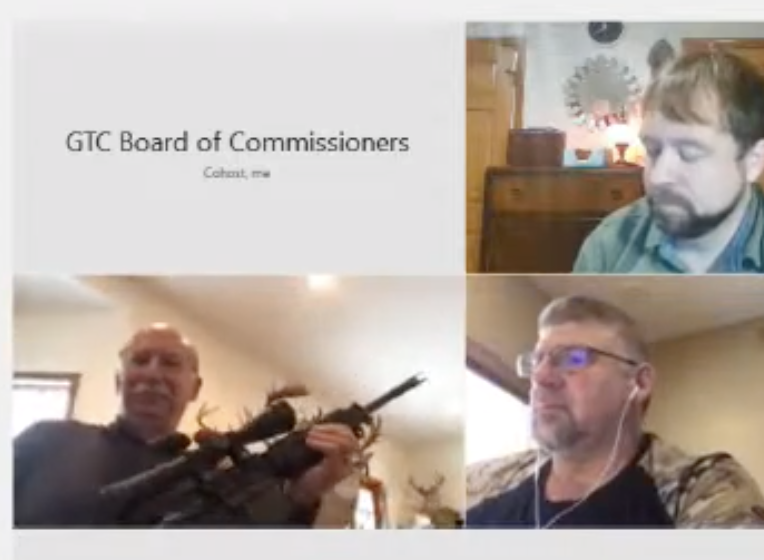 As MacIntosh spoke, Commission Vice Chair Ron Clous got up from his chair and disappeared off-screen momentarily. He returned with what appeared to be a semi-automatic rifle, holding it across his chest close to the camera as MacIntosh continued speaking. Hentschel began laughing when he saw Clous, with Clous then setting the rifle down on the floor.

You can watch the video for yourself HERE (Clous brandishing his weapon begins at the 1:31:27 mark).

Yes, the meeting is on Zoom, not in person. Yes, it look like it’s just a couple of gun fetishists have a yuck-yuck at the expense of constituent who isn’t happy about their positions regarding fascistic cosplay soldiers like the Proud Boys. But this was still a public meeting. And waving a gun around in response to the comments of a community member is shocking and completely unacceptable. It looks, for all intents and purposes, to be a threat: Shut up or I might do more than just show you my gun.

I am told that local residents have contacted both the County Prosecutor and Attorney General Dana Nessel, asking them to press charges for this truly outrageous act by an elected public official. Here’s hoping Ron Clous pays a steep political price for his disgusting display.

UPDATE: I wanted to elevate this from Cindy in the comments:

Here in Grand Traverse County the prosecutor has excused herself from the case and is turning it over to the state Attorney General’s office. A letter from citizens of Grand Traverse County will be presented today to the Traverse City Record Eagle editorial board. I invite everyone who is aghast and disgusted at this behavior by public officials please to send your comments to the Record Eagle by submitting a letter to the editor HERE. Attorney General Dana Nessel can be reached by email at [email protected] or by her contact page HERE.