Ned Staebler lights up Wayne County elections board meeting, calling out GOP racists for what they are – UPDATED

All eyes have been on Wayne County, Michigan for the past week as we waited for their Board of Canvassers to certify the election. Last evening, the election board — which is comprised of two Democrats and two Republicans — met to certify the county’s election. However, in a shocking and quite possibly illegal move, the two Republican members, Monica Palmer and William Hartmann voted NOT to certify. With a 2-2 tie vote, Wayne County’s election was not certified and hundreds of thousands of voters were disenfranchised.

Donald Trump and the Michigan Republican Party, of course, quickly began crowing (i.e. tweeting) about finally winning a round in their endless, quixotic fight to rescue Trump’s failed campaign.

During the meeting, Palmer said she would be willing to certify all of the precincts except those in Detroit and with that statement, she might as well have lobbed a Molotov cocktail into the Zoom meeting. Speaker after speaker decried their act but it was my friend Ned Staebler’s fiery speech that truly lit the place on fire. Ned spent 15 hours in the TCF Center on Election Day monitoring the election so he had firsthand knowledge of how well the election was run. Speaking directly to Hartmann and Palmer, here’s what he had to say:

[T]he Secretary of State and the Attorney General have already tweeted out that your legal arguments are rubbish and you’re going to lose when it comes to court so we’re not worried about that at all. I’m also not worried about any of your “Oh, things are bad so we can’t certify” arguments because that’s just ridiculous. You certified in August when they were worse, less than 50% of the ballots were recountable. Now over 72% are. 58% of them are even balanced when it was less than 30% last time. So, it’s doubled, it’s gotten way better because the Secretary of State actually jumped in and did her job. Unlike YOU. But I know it’s not going to change your opinion.

You talked about not certifying Detroit even though you acknowledge that Livonia — a city, by the way, I know you know is 95% white — had bigger variances than Detroit which is 80% black. We understand. And you now added your names so I’m not going to try to change your minds.

I just want to let you know that the TrumpStink, the stain of racism that you, William Hartmann and Monica Palmer, have just covered yourself in is going to follow you throughout history. Your grandchildren are going to think of you like Bull Connor or George Wallace. Monica Palmer and William Hartmann will forever be known in southeastern Michigan as two racists who did something so unprecedented that they disenfranchised hundreds of thousands of black voters in the city of Detroit because they were ordered to — probably, I know, Monica, you think “Q” told you to do it or some other crazy stuff like that.

But just know that, when you try to sleep tonight, that millions of people around the world now on Twitter know the names Monica Palmer and William Hartmann as two people completely racist and without an understanding of what integrity means or a shred of human decency.

Fortunately, his epic takedown was captured on video:

You should stop what you are doing and watch @NedStaebler rip apart the Republicans in #WayneCounty on the Board of Canvassers for being racists who tried to disenfranchise hundreds of thousands of Black voters in #Detroit . pic.twitter.com/SR8qges0Oc

Following the vociferous pushback from multiple people, including some Republicans, the Board of Canvassers revoted, this time voting unanimously to certify Wayne County’s election with the condition that Secretary of State Jocelyn Benson conduct an audit: 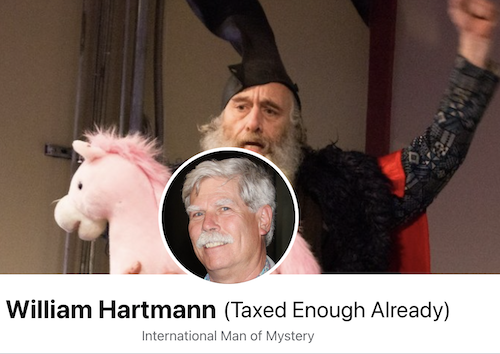 As it turns out, both Hartmann and Palmer are both highly questionable choices for such an important body as the Board of Commissioners. Hartmann’s Facebook page, which is still up and viewable as I write this, is full of racist and generally offensive tea party fodder including a wide assortment of Trump memes and disinformation.

Del Quentin Wilber dug into Hartmann’s posts from 2008 and it’s quite ugly:

Did a cruise through Wayne County Canvassing Board member William Hartmann's public Facebook posts. He's a Republican, so not a surprise he is a BIG Trump supporter

I'll let you judge a sample of posts I pulled from 2010. He voted not to certify Wayne County's ballots. pic.twitter.com/vGZt8mGeCF

Monica Palmer, on the other hand, has another meeting today. This one is with the Wayne County Ethics Board. However, Palmer isn’t ON the Ethics Board. She is on their agenda, facing charges of conflict of interest.

Now that the drama has ended, Michigan can get on with certifying its results and awarding its 16 electoral votes to President-Elect Joe Biden.

And Ned Staebler is now a national and international hero for helping save democracy. We all owe him a huge debt of gratitude.

UPDATE: Ned reports that he has been doxxed online with his home address shared for harassment. He was also doxxed in the comments on this post but the comment has been deleted and the commenter banned. Any further attempts will result in the same response.

UPDATE 2: In an unbelievable turnaround, Palmer and Hartmann now wish to rescind their votes AGAIN and have filed affidavits saying so. The move apparently has no impact since the deadline to certify has now passed.