Rich, whiny, with an unconscionable grudge against women and minorities 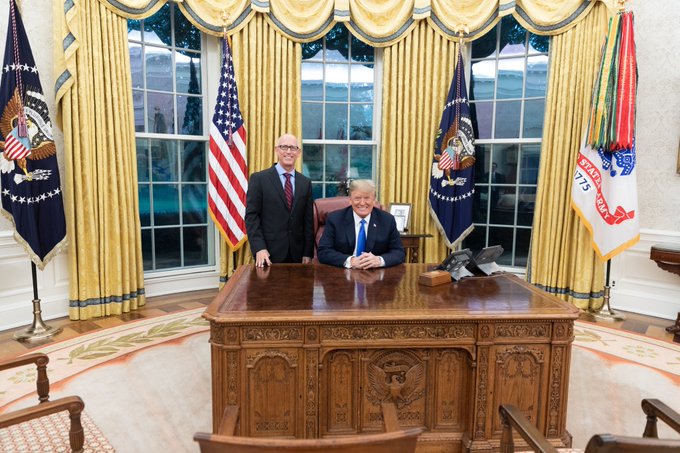 Imagine after staking out a very successful career peddling flabby, relatable office humor that mocks unearned arrogance and managerial incompetence, you make the discovery of a lifetime. You — a trained hypnotist and heretofore unacknowledged Master Persuader — have spotted a gifted manipulator whose Persuasion skills may even exceed your own.

You go all in. When everyone still thinks the whole thing is a joke to sell steaks or timeshares, you say, “This genius, my genius, could be president.”

Because most people think your genius is vile and you love to troll, you argue that you’re not actually going to vote for the guy. You just have so much game that you are obligated to recognize game.

And then? Your genius wins. Sort of.

Wow. Score. His genius vouches for your genius. And versa vice. You write books taking all the credit yet none, because you’re just Boswelling your genius Johnson.

But it doesn’t end there, you keep creating your comic, which has been running on autopilot since Windows 2000, but now you’re able to get on Fox News for your gifts related to Persuasion. Somehow this turns into you defending everything awful your genius does, pioneering the approach of calling any news that’s bad for your genius a “hoax.”

Smart. Because if you admit that this genius is only president because of a world historically bad memo from the FBI Director, lots of help from Vladimir Putin, and heinous voter suppression made possible by a gutting of the Voting Rights Act, you’re not a genius anymore.

Think about it. If you admit that you backed a guy who calls neo-Nazis and Klan members “very fine people,” your fandom just looks gross. If your whole thing is Persuasion, who is being Persuaded when the president of the United States standing up for racists who chased a congregation out the back door of a synagogue because they love Confederate statues so much?

Or maybe none of this is an accident.

Maybe there’s a reason you were so turned on by the world’s most famous birther, a clown who called for the execution of five innocent black teenagers for sport, a network TV star accused of more than a dozen sexual assaults, a walking trust fund who spent his career dependent on undocumented labor and immigrant wives yet decided to smear immigrants to death for some political advantage.

Maybe you see yourself in a world-class bullshitter and aspiring totalitarian who wandered into George Wallace’s central epiphany, “The whole United States is Southern!”

Maybe, it turns out, you’re nearly as furious at women and minorities as Donald Trump is. 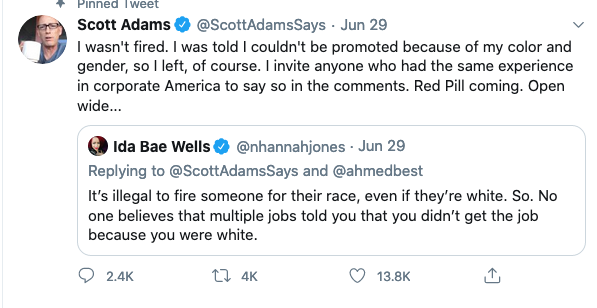 It’s the story of a rich dude settling a score against non-white males. Why? They were in his way.

Adams was born into the one generation where something was being to done to overcome the tremendous advantages white males in America have long taken for granted. So he has a score to settle. And like millions of other older, whiter, richer males, he is doing it through Donald Trump.

I admit it, I was very intrigued by Scott Adam’s Persuasion grift in 2017. It fed into the notion pushed by many messaging experts on the left — including George Lakoff and Anat Shenker-Osorio — that Republicans’ electoral success — despite the awfulness of their policies and brand — relies on successful framing and repetition of said framing.

I read Adams’ Twitter feed, listened to him on podcasts, studied his feed. I mostly ignored his need to tell the story again and again how he’d left a previous job because he’d been informed that as a white male, he could never advance any further in the company. But I didn’t process him as someone driven by a racist grudge, even when he gave comfort to Trump giving comfort to neo-Nazis. But recently, since the murder of George Floyd, the grudge has been impossible to miss. Mostly because he keeps pinning it to the top of his feed.

Adams has made his insistence that systemic racism doesn’t exist and his perceived beef about affirmative action a centerpiece of his simpering.

Maybe he’s doing this because there currently aren’t many or any examples of Donald Trump’s genius Persuasion to Trump up these days. Or maybe he just has a grudge he’s playing out in public to the pleasure of leagues of older, whiter dudes who — like Donald Trump — imagine their lives would be so much easier if they’d been born non-white non-males.

Of course, Adams’ creation myth drips with the milky condensation of white privilege. Maybe he was really too white, too male to succeed in his field, unlike the 89-90 percent of CEOs who are white males. Maybe his boss was trying to let him down easy. Maybe he just made up a story that justifies the rest of his life.

Regardless, in his own story, he was “told” why his career was stalled — a luxury few minorities or women ever get.

The ways that black people are held back in America aren’t disclosed by a supervisor. One study found that African-Americans who simply “whitened” their names improved their ability to just get job interviews. Minority students are far more likely to attend worse schools, generally because those schools often receive less funding and are expected to fix poverty. And their families start off with far less wealth that would put them in the position to make up for the lack of advantages they get when it comes to education or connections. Because even when black people get college degrees, they’re still twice as likely to be unemployed as all other college graduates.

If you don’t believe that the overwhelming evidence that shows systemic racism exists, if you don’t believe black Americans start with less and face more obstacles, you have to argue that black people are either inherently lazier or less capable than white Americans. In other words, you’re a racist — no matter how many times you quote the one line from a Dr. Martin Luther King Jr. speech that you know.

Adams’ refusal to acknowledge any racism that isn’t explicitly wearing a Klan hood isn’t novel. Nor is his grudge against any effort to rectify historic bias. It’s the basis of the modern conservative movement and the prevailing view of the five Republicans on the Supreme Court. It’s the dog whistle that Republicans have used to undermine anything our government does to help working people, while letting rich people loot us to their heart’s content.

You can see why he thinks Trump is so damn Persuasive.

And you can see why guys like Trump and Adams have a existential interest in pretending white privilege does not exist.

They want to pretend their advantages were disadvantages. And Adams needs to justify supporting a racist president who has led America into the worst response to a public health crisis in at least a century and the greatest job losses in the history of the country — at the same time.

If you deny racism exists, you don’t just get to justify lathering Trump for a living, you can pretend birtherism was a healthy way to bring citizens into the political process, ignoring the obvious racism of humiliating and undermining a non-white president by questioning his essential American-ness with the demand made to runaway slaves, Jews in Nazi Germany, and refugees everywhere: “Show me your papers.”

There is something to the argument against white privilege.

Race doesn’t actually doesn’t exist. It was an social construction created largely to justify and perpetuate chattel slavery. In that system all white people — whether they owned slaves or not — were endowed with with a participation prize for not appearing black. The creation of whiteness was, essentially, as a privilege.

But Adams has no interest in seeing anything that questions his myth that despite the racism he endured, he overcame the odds with pluck. Instead, when anyone doubts his belief that anything aspiring to correcting historical injustices is actually oppression to HIM, he calls them a “racist.” Apparently, he does believe in systemic racism: Against him.

And as the dead bodies and job losses pile up from COVID-19, “That’s racist!” has become the central schtick of Tucker Carlson and, of course, Donald Trump.

Of course, what Adams is preaching isn’t even Persuasion — it’s compliance gaining.

“There’s an important difference between persuasion and forced compliance,” writes Jennifer Mercieca, an expert on Trump’s rhetoric and author of Demagogue for President: The Rhetorical Genius of Donald Trump. “Persuasion is democratic; it requires consent. Compliance is authoritarian; it is a kind of force.”

And as far as politicking goes, it’s not great either. A former political consultant who has helped design communication strategy for several major winning campaigns told me, “I bet he couldn’t manage a city council campaign.”

But I bet Adams wouldn’t want to mess in actual politics.

Wanting credit for things you haven’t done is the essence of privilege. He recognizes winning local elections takes a remarkable amount of work for very little influence, relatively. Pontificating on the internet, as I well know, takes almost no work. Stapling yourself to the biggest popular vote loser elected in 140 years, the only president elected by inviting the help of a foreign power and the most corrupt failure to ever hold the office, is a bet. And there’s no reason to back off now, given the horrors you’ve already backed.

And that’s the sad punchline.

You spend your whole life mocking the management only to reveal your main beef with the boss was that he wasn’t racist or misogynistic enough to give you the promotion you probably didn’t deserve.