It’s difficult to overestimate how truly awful Sen. Tom Cotton’s op-ed in the NY Times yesterday was, but here’s the bit that made me stop reading and my mouth hang wide open…

“One thing above all else will restore order to our streets: an overwhelming show of force to disperse, detain and ultimately deter lawbreakers.”

This is the sort of faux-macho, swaggering insecurity that has characterized the current iteration of Republican leadership in our nation.

It confuses power for strength, and hubris for courage. It never apologizes, always doubles down, and substitutes a toxic blend of arrogance and ignorance for thoughtfulness, wisdom, and compassion.

While Mr. Cotton may have come for the demands for unthinkable escalations of violence and anarchy, he stayed for the casual racist slurs and demonizing of the protesters:

“One thing above all else will restore order to our streets: an overwhelming show of respect to the protesters, and the demonstration of a sincere interest in listening and understanding their anger, pain, and despair.”

Sadly, these are all qualities far beyond the reach of Mr. Cotton, and his ideological idol and mentor, Mr. Trump…and until they are both removed from power we will be subjected to a continuous clown’s parade of ineptitude mixed with banality.

Somehow, Sen. Cotton’s dangerous and incendiary rhetoric brings to mind the following lyrics from “Send In The Clowns,” by one of my favorite composers, the brilliant Stephen Sondheim…

Don’t you love farce?
My fault, I fear
I thought that you’d want what I want
Sorry, my dear!
But where are the clowns
Send in the clowns
Don’t bother, they’re here 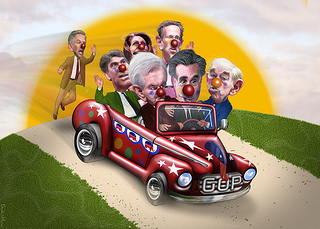