Secretary of Education Betsy DeVos has pulled a lot of shady stuff in her time in President Trump’s Cabinet. But her latest action may take the cake for brazen, underhanded political malfeasance.

Education Secretary Betsy DeVos is using the $2 trillion coronavirus stabilization law to throw a lifeline to education sectors she has long championed, directing millions of federal dollars intended primarily for public schools and colleges to private and religious schools.

To put it simply, after a lifetime of humiliation and failed attempts, in both her home state of Michigan and nationally, to get private and religious school voucher programs passed into law, Ms. DeVos is using the worst health emergency in our nation’s history to use federal funding for voucher programs that favor private and religious schools across the country, many of dubious legitimacy, and drawing rebukes for “exploiting congressional relief efforts.”

Here are some of the schools that Betsy DeVos has made sure received federal relief funding, in spite of Congressional guidance that these funds be directed toward low income students and communities:

Meanwhile, public education officials in several states are pointing out that DeVos’ decision to not consider income levels when determining to whom or where these funds are sent is a violation of Congressional guidance that stipulates the funding should be used to help students and schools who are most disadvantaged.

Educators are pleading with the department to revise or rescind the guidance. In Montana, school officials estimate that compliance would shift more than $1.5 million to private and home schools, up from about $206,469 that the schools are due under current law. In Louisiana, private schools would receive at least 267 percent more funding, and at least 77 percent of the relief allocation for Orleans Parish would be redirected, according to a letter state that education chiefs sent to Ms. DeVos. The Newark Public Schools in New Jersey would lose $800,000 in federal relief funds to private schools, David G. Sciarra, the executive director of the Education Law Center, said in a letter to the governor of New Jersey asking him to reject the guidance.

Pennsylvania’s education secretary, Pedro A. Rivera, protested to the department that under the guidance, 53 percent more money would flow “from most disadvantaged to more advantaged students” in urban districts like Philadelphia, while rural districts like Northeast Bradford would see a 932 percent increase.

“School districts can — and should — ignore this guidance, which flouts what Congress intended to do with the CARES Act: support students who need it the most,” said Randi Weingarten, the president of the American Federation of Teachers, and Daniel A. Domenech, the executive director of AASA.

Indiana has announced it would not enforce the guidance. In a memo, its superintendent of public instruction, Jennifer McCormick, a Republican, said the state “ensures that the funds are distributed according to congressional intent and a plain reading of the law.”

“I will not play political agenda games with COVID relief funds,” she said on Twitter.

It’s worth mentioning that the Republican-controlled Senate has refused to support previous voucher funding requests from Ms. DeVos since she has been in office, and that both of her prior attempts to move voucher legislation into law in Michigan were defeated soundly. Yet she continues to find ways to force these unconstitutional and backdoor voucher programs into the federal government’s approach to education funding.

And she knows that vouchers are deeply unpopular with voters–so she uses lots of euphemisms to describe them so that folks don’t really now what she’s really talking about. Terms like: “tax credit scholarships,” and “freedom scholarships,” and “microgrants,” and “opportunity grants”. 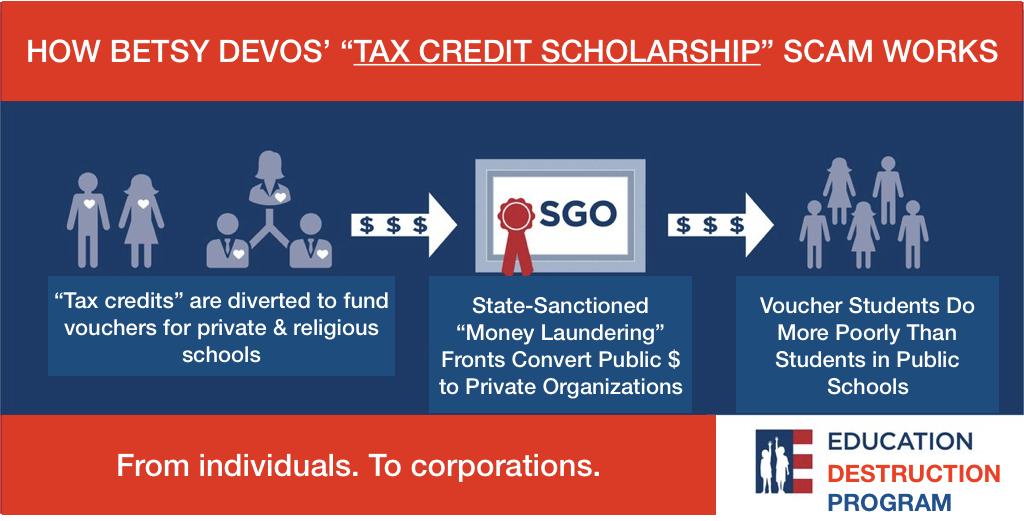 And the cherry on this rancid “school choice” sundae? “The program also stands to benefit virtual education companies that Ms. DeVos has personally invested in.”

Don’t let her do it. Tell your representatives in the House and Senate that you support public education, and tell Betsy DeVos to keep her hands off of our schools.