Standing with nurses is nothing new for the current State Representative. But he’s pushing to do even more, now and in Congress. 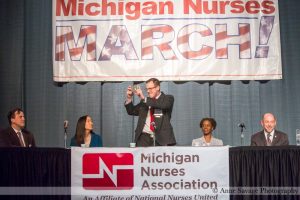 Jon Hoadley has always had deep respect and affection for nurses. He’s been recognized by the Michigan Nurses Association (MNA) with their Legislative Champion Award, and has frequently spoken on legislator panels on behalf of nurses throughout his legislative career. His longstanding support of nurses has already earned him the endorsement of the MNA in his run for Congress against incumbent Republican Congressman Fred Upton.

But as everyone knows, things are drastically different at the moment. Nurses are always on the front lines of care, but treating COVID-19 patients puts their lives at risk in unprecedented ways. Although he respects the work of all healthcare providers, Rep. Hoadley knows nurses need more support than ever right now.

“In treating patients with COVID-19 they’re doing tasks like taking swabs and processing intake — coming in close contact with patients without the necessary protection,” Rep. Hoadley says. “I recently had a call with nurses who told me they’re only getting one mask for a shift or even a number of days.” Typically, a healthcare provider would change their mask after every patient.

Rep. Hoadley recorded a short video sharing other details of his call with nurses, the challenges they’re facing — and to show appreciation for everything they’re doing to take care of patients across Michigan by encouraging Michiganders to sign a virtual thank-you card.

Although Rep. Hoadley realizes sending nurses a virtual thank-you card doesn’t replace the need for personal protective equipment (PPE), he says it doesn’t have to be a case of either/or.

“This is a ‘both/and’ situation,” he says. “I applaud everything Governor Gretchen Whitmer has done to put together a coalition to figure out what we can produce, where we can buy it — a regional cooperative model to get what we need. My job as a State Legislator is to make sure to advocate so she has the funds to do that.”

But he says it’s equally important to make sure nurses know we see them and all the hard work they’re doing. As he mentions in the video, the card will be delivered to the Michigan Nurses Association on May 1, so please sign the card as soon as possible.

In the meantime, Rep. Hoadley is frustrated with the lack of a national strategy that landed nurses, care providers, first responders and every American in the position we find ourselves in today.

There should have been a national strategy to produce enough PPE and the Trump administration wasn’t willing to lead. Members of Congress need to continue to put pressure on President Trump to roll out a science-based national strategy. Members like Congressman Upton have not done that.

Rep. Hoadley adds that at every opportunity, Rep. Upton has voted to dismantle healthcare access through the Affordable Care Act (ACA) whenever he had the chance — more than 60 times. 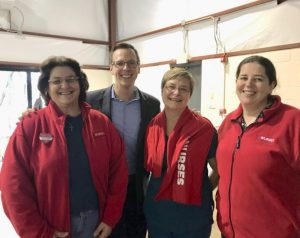 “Healthcare is very personal to me and my policy. Through no fault of their own, millions of Americans have lost their health insurance due to COVID-19,” Rep. Hoadley says, referring to people who have been fired or laid off without their health benefits being continued. “Yet President Trump refuses to do things like re-open the ACA exchanges so people can enroll and there are still active Republican lawsuits trying to dismantle the ACA entirely.”

He points out that losing your job is the kind of life event that allows you to enroll for coverage outside the ACA open enrollment period. People who have lost their jobs and need health insurance can learn more at Healthcare.gov.

But there’s even more that Congress could be doing, Rep. Hoadley says.

The lack of a national strategy calls into question our ability to re-open the economy safely. If nurses don’t have PPE, what about our retail workers? We needed to ramp up the Defense Production Act, immediately start increasing testing, contract tracing and providing more PPE — producing it right here in America — but that required leadership and President Trump wasn’t willing to lead. Nor was Congressman Upton, who sent a letter to Governor Whitmer about gardeners and landscaping, but is silent on PPE. These are the kinds of roadblocks slowing our ability to re-open the economy safely.

As Rep. Hoadley notes, President Trump told governors to fend for themselves — and that bipartisan groups of governors and regional leaders are working together to “make the best of a bad situation we didn’t need to be in.”

Please take the time to sign the thank-you card to Michigan nurses by April 30 — and if you can, make a donation of any size to support Rep. Hoadley’s Congressional campaign. His proven track record of advocacy for nurses, healthcare for all and many other issues is more needed in Congress than ever.