40,000 Americans could be alive if Trump had followed South Korea’s lead

Assigning fault for a public health disaster is easy… if you’re Donald Trump.

In 2014, a doctor infected with Ebola while treating patients in Africa was allowed to return to the US, Trump demanded that the 44th president resign.

Trump called the Obama/Biden approach to the H1N1 flu a “disaster” because 17,000 Americans died. This number came from a revised CDC count of deaths from H1N1 of between 8,330 and 17,160 that came the year after the outbreak the original count of 2,498.

About 12,000-15,000 Americans are now dying of Covid-19 in every week. And a revised count will probably show that our current count is far too low.

In the spirit of Trump’s generous assessments I asked the LOLGOP Think Tank to empty its strategic supply of think, which is currently trading below oil, to provide us with a sense of just how bad Trump’s response to Covid-19 has been.

We all know that that this president spent the first key months of this disaster holding rallies and golfing, echoing Chinese government propaganda downplaying the threat, and calling any attempt to get him to take the virus seriously “a hoax.” But just imagine that he didn’t pandemic like the pee tape or the Mueller investigation, waiting for William Barr to just make it go away. Imagine if he responded to this once-in-a-century threat to American lives and treasure as if it were a once-in-a-century threat to American lives and treasure.

Well, we know pretty much exactly what that would look like. It would look like how Japan or South Korea responded to this plague. These two democracies adopted differing strategies but both have had remarkable success limiting deaths due to Covid-19. 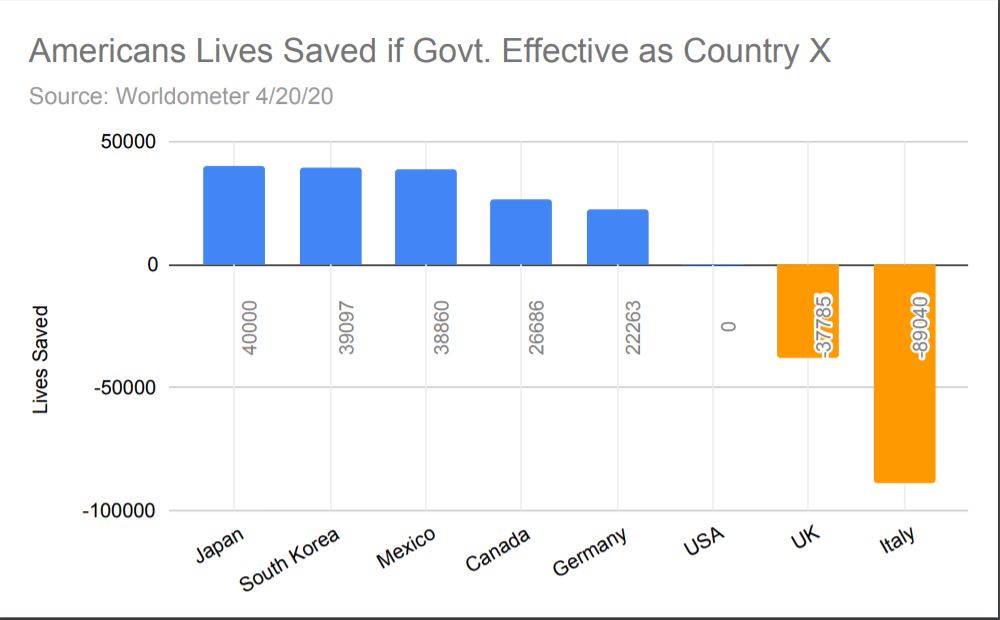 These numbers were calculated relative to population. More detail below.

Maybe you don’t buy Mexico’s numbers. Maybe you aren’t an American exceptionalist and don’t think that we could ever be as efficient as South Korea, Japan, Canada or Germany. Maybe you’re glad Trump didn’t do worse — as the UK or Italy have — because you remember his promise to “Make America Less Than Average Again.” Or maybe you just don’t like to cast blame for a tragedy.

But out of respect for Donald Trump, we must.

On April 20, 40,620 Americans were reported dead from the novel Coronavirus and if our president were as good as his job as the president of South Korea or the prime ministers of Japan and Canada or the chancellor of Germany — if he, alone, would have fixed this — as tens of thousands more Americans could have been alive.

Just imagine what Donald Trump would say about that.