Watching today’s Corona Virus Task Force press briefing, I experienced flashbacks to so many faculty meetings I’ve attended during my career as a teacher…

The meeting begins with opening remarks from the “big boss” (think: Trump), alternating between attempts at morale building (“We are doing so great! Better than ever before!”), paranoid defenses of the boss’ policies when challenged (“I’d say that maybe you aren’t doing a very good job of implementing our new attendance policy then!”), and bizarre attacks borne out of frustration at an “underling” daring to question his authority or power (“We have too many people who are not following proper protocols, so don’t bring me your problems–fix them on your own!”).

At this point, the boss often stamps out of the room, claiming he is already late for a “more important meeting,” and turns over the meeting to the “#2” (think: Dr. Fauci). This person is often highly competent at their job, does most of the day-to-day work required to run the school, and has figured out how to appease the boss’ wild mood swings without the boss knowing he’s being “handled.” Other staff members realize what a “difficult position” the #2 is in, and appreciate her or his efforts to help manage the group’s operations.

Lurking in the background are the boss’ sycophants (think: Pence, Pompeo), who have nominally more positional authority than the #2, but don’t actually do much more in the building than run interference for the big boss, or share gossip that can help advance them in the group’s hierarchical structure, and/or hurt their competitors. 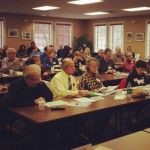 The rest of the teachers at the meeting (think: White House reporters) are left wondering why they were required to attend when so little of value was actually shared. A few of the braver ones raise their hands to ask questions, knowing they will be mocked or ridiculed for doing so, and everyone wanders back to their classrooms at the meeting’s conclusion, trying to make sense of what happened.