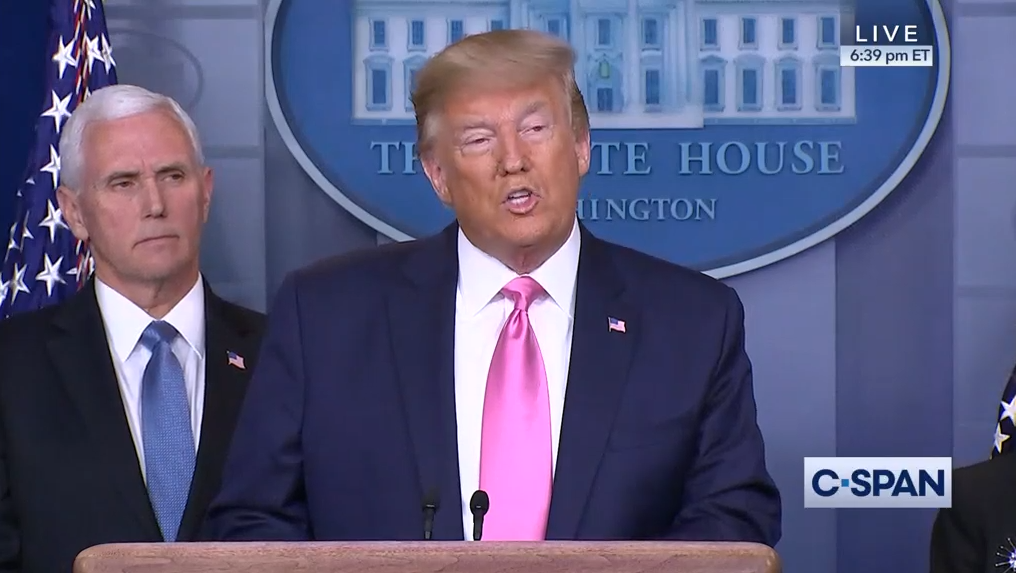 Many people have noted that Donald Trump’s luckiest break as president was not succeeding in repealing the Affordable Care Act. Barack Obama suffered the political consequences of expanding insurance coverage to 20 million Americans. Taking it away from a comparable number would almost certainly mean political consequences even worse than the biggest House midterm loss in American history.

But screw the political consequences when it comes to health insurance of 20 million people, which likely saves one life for about every 830 people who gain it. We have to be glad he failed, even if it means he may succeed later.

Which leads us to the coronavirus.

When it comes to a pandemic, which this already seems to be, all that matters are the facts. That’s the message from John M. Barry, author of “The Great Influenza: The Epic Story of the Deadliest Plague in History“.

“I think the number one lesson that came out of the experience is that if you want to prevent panic, you tell the truth,” he said.

If you want to know the truth about coronavirus, please listen to this interview with Harvard epidemiologist Mark Lipsitch. You’ll soon know more than ever wanted to know about this likely pandemic and almost certainly more than the president of the United States.

You could connect what looks to be an overreaction to the spread of coronavirus on Wall Street this week with an acknowledgement that Trump’s lies — and an inability to stop lying — are putting us all in greater danger.

In his press conference on Thursday designed to “reassure” the markets, Trump spewed lies.

But I don’t think that’s what freaked the markets out most.

Republican Senator John Kennedy didn’t set out to grill the acting head of the Department of Homeland Security Chad Wolf earlier this week when he asked the most basic questions he could about the potential of an outbreak in the United States.

But it ended up being a grilling.

This exchange revealed that the greatest danger isn’t that the president of the United States lies. It’s that he’s spent three years gutting our government of experts (especially those who could fight the coronavirus), going around the Constitution to appoint “acting” shills in powerful positions and training everyone to focus on one goal — protecting his feelings.

“For the Trump administration, the top priority in a global public health crisis is not public health, but the reputation of the Leader, who after all, represents the Will of The People and whose image is therefore more important than actual people,” Adam Serwer tweeted, summarizing the mentality that consolidates Trump’s control over his party so neatly it hurts.

This urge to sooth the president’s feelings over all else is why Mike Pence was put in charge of the coronavirus “response” and why the response now sounds more like pep rally than a public health briefing.

Lipsitch says that his current projections foresee the disease affecting 40-70% of adults on the planet. He counts as one of his biggest fears the lack of a “serious” response from this administration. The administration waited until the markets started crashing to offer a plan, which asked for way too little money and added the political complication of demanding that some of the money come from funds allocated to help poor Americans afford heat in winter.

(If you want to know what a serious response sounds like, listen to Epidemic, the new podcast from the heroic Ebola Czar Ron Klain and Dr. Celine Gounder.)

A “serious” response would at the very least the truth. And the truth is that we’re behind, many of the protections that have been built into our government are gone and the president of the United States won’t tolerate anyone who is willing to tell him or us the truth about the coronavirus if it hurts his feelings.

For this not to be a catastrophe, we have to demand those who spent years letting us get to this point speak up and hope for one hell of a lucky break.