In a hyper-partisan time, Michigan’s cat “declawing” ban bill is a place for unity for all the right reasons 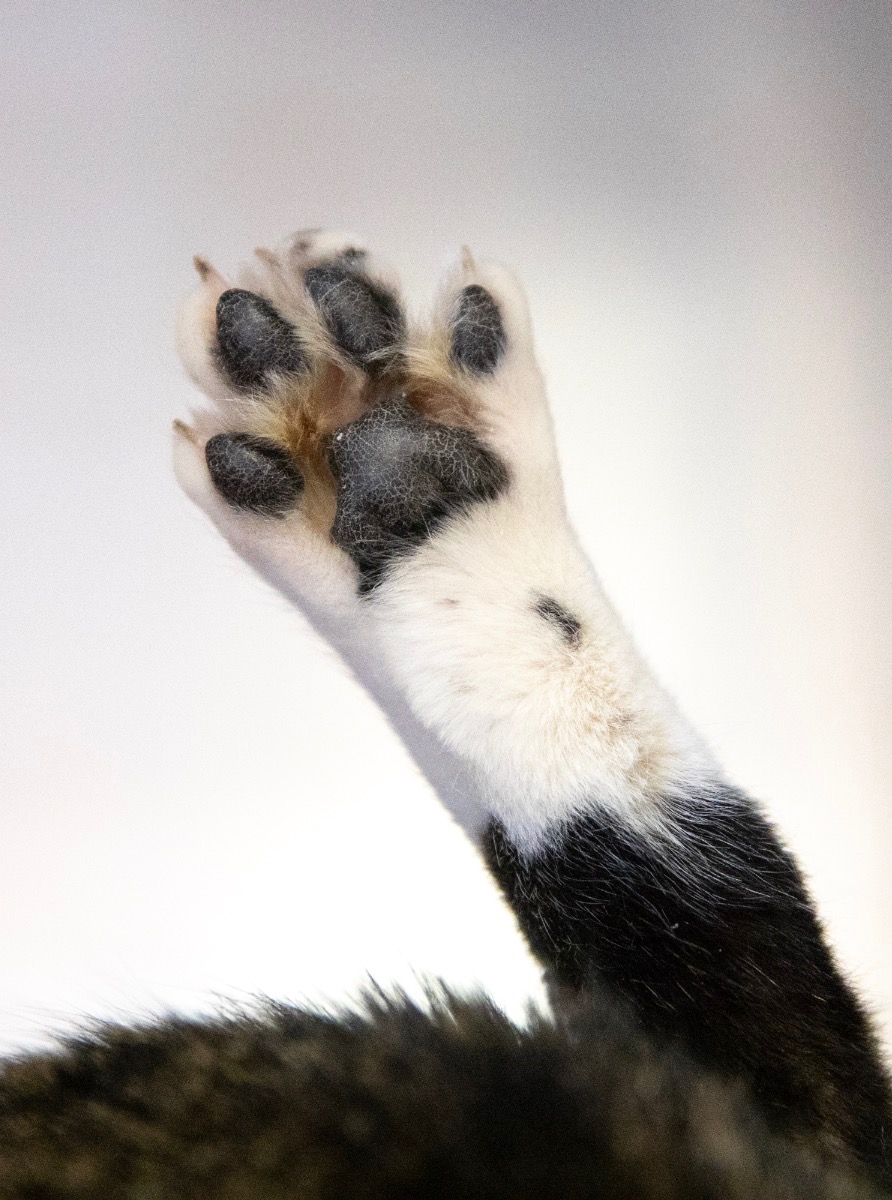 I have a confession to make: I have had several cats “declawed” in my life. Of all the things I have done, this is something I am most regretful for. Why? Because, as Molly Tamulevich, the state director for the Michigan branch of the Humane Society of the United States, told me, “Declawing a cat is much more than a manicure; it involves amputating the end of each toe, which can cause pain, infection, and behavior problems.”

But “declawing” cats was a way of life in my family. And no vet I ever talked to ever told me the reality of what it involves. Beyond the cruelty involved and despite the pushback from people who claim not “declawing” cats will lead to more cats filling animal shelters & rescues, “declawing” cats can actually increase the number of cats in these shelters and rescues due to the health and behavioral problems that develop because of the procedure.

This past week, Democratic Representative Nate Shannon introduced House Bill 5508 that would make Michigan the second state to ban this cruel and unnecessary practice.

I wanted to write about this because there is so much misunderstanding and misinformation about cat “declawing”. The natural person to turn to was someone who is the most passionate advocate for animals — both pets and wild animals — that I know: Tanya Hilgendorf, the President and CEO of the Humane Society of Huron Valley (HSHV). Along with Humane Society of the United States Michigan branch, HSHV has been a strong advocate for Rep. Shannon’s legislation. I asked Tanya for her perspective on this legislation and what people need to know about cat “declawing”.

Oddly, although it has 20 cosponsors in addition to Rep. Shannon, only one of them is a Republican. This perplexes me because there is nothing partisan about animal protection. If your state legislator is NOT a cosponsor of this bill, and that includes all but one of the members of the Republican House caucus, please consider asking them in joining Republican Rep. Tommy Brann in becoming one. As Molly told me, “Michiganders, famously compassionate and actively engaged in the welfare of Michigan’s animals, have clearly expressed that they support banning declawing in our state. Hopefully Representative Shannon’s bill swiftly pass into law so that Michigan can become the second state in the country to prohibit this cruel procedure.”

One more thing before we get to Tanya’s essay: You may have noticed that I have put quotation marks around “declawing”. That’s because I have come to realize that this isn’t removing a cat’s claws. It’s amputating the tips of all 20 of their toes down to the first knuckle. What’s amazing to me is that more cats don’t exhibit serious health and behavioral problems from having had this done to them. It only goes to show how tough our little house panthers actually are, no matter how cute and cuddly they may be.

A big thanks to Tanya Hilgendorf for her potent message about this legislation.

All photos by Anne C. Savage, courtesy of the Humane Society of Huron Valley 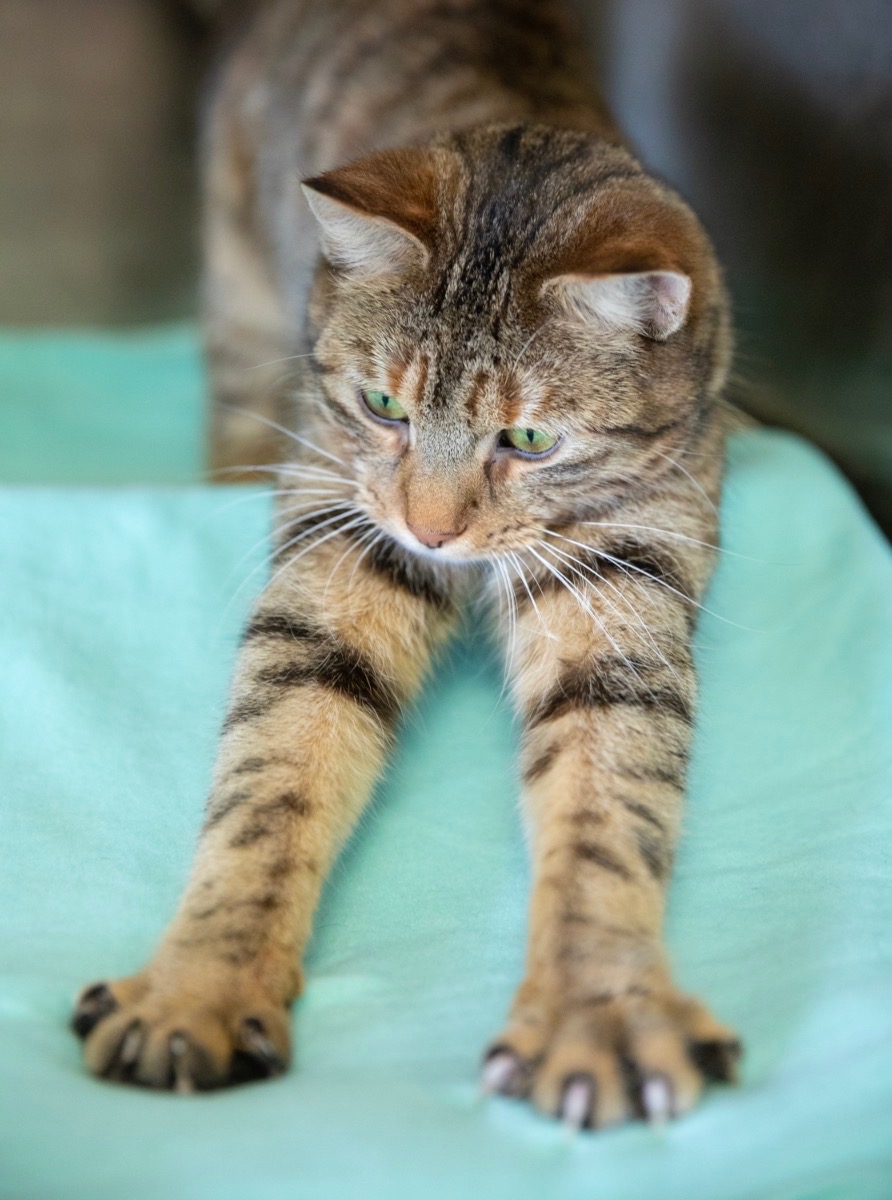 The term declaw is very misleading — a white-washing, so to speak. It makes people think an animal doctor is somehow, perhaps by magic, making a cat’s nails disappear, leaving all furniture worries behind. But there is no way to remove a cat’s claws without doing real harm and risking lifelong problems. This elective surgery is actually an amputation of the last bone in each toe, similar to removing the tip of your finger up to the knuckle. Sounds painful, no? But toe amputation is not only a painful surgery to recover from, it can cause life-long pain and puts cats at risk for intractable behavioral problems.

Here at the Humane Society of Huron Valley, we have literally thousands of homeless cats coming through our door each year. And because we are an organization working hard to save them all, currently with a 96% save rate, we put a lot of medical and behavioral care into our cats. As such, we’ve developed a protocol for assessment and treatment of incoming declawed cats because how often we’ve seen the negative effects. We see cats with chronic pain. Botched surgeries, bone fragments left behind, and arthritis are commonly seen on x-rays. We see cats who are inclined to bite and those that don’t want to use the litterbox. We’ve had to do reparative surgeries and some cats have to be on lifelong pain medication.

Sadly, many declawed cats are euthanized in shelters because they are deemed aggressive or because of intractable litter box problems. But these behaviors are often secondary responses to pain and stress of not being able to express natural behaviors.

I recently heard a Michigan shelter director complain about the ban. He said he’s never seen any problems with it. But his shelter kills half the cats they take in and there are no experts assessing root causes of behavior problems. Cats in these types of shelters are usually just after-thoughts, lucky to get out alive. How would he even know?

Some have claimed that this ban will cause an increase in cat homelessness because of owners and prospective owners who won’t tolerate scratching. But we know that hasn’t been the case in areas where declawing is already banned. In fact, I think the exact opposite is true. The behavior problems that result are often why cats get turned into shelters. And, believe me, it’s a lot easier to adopt out a healthy, happy cat with her toes intact than to figure out how to re-home a cat who bites or won’t use the litter box.

I’ve also heard folks say, “I declawed my cat and he was perfectly happy”. Perhaps, after kitty healed, that is true. But that doesn’t negate the risk. Not everyone who smokes cigarettes dies of lung cancer at 52, but the increased risk is proven. Cats are quite stoic about pain and obviously they can’t tell you with words how they are feeling. 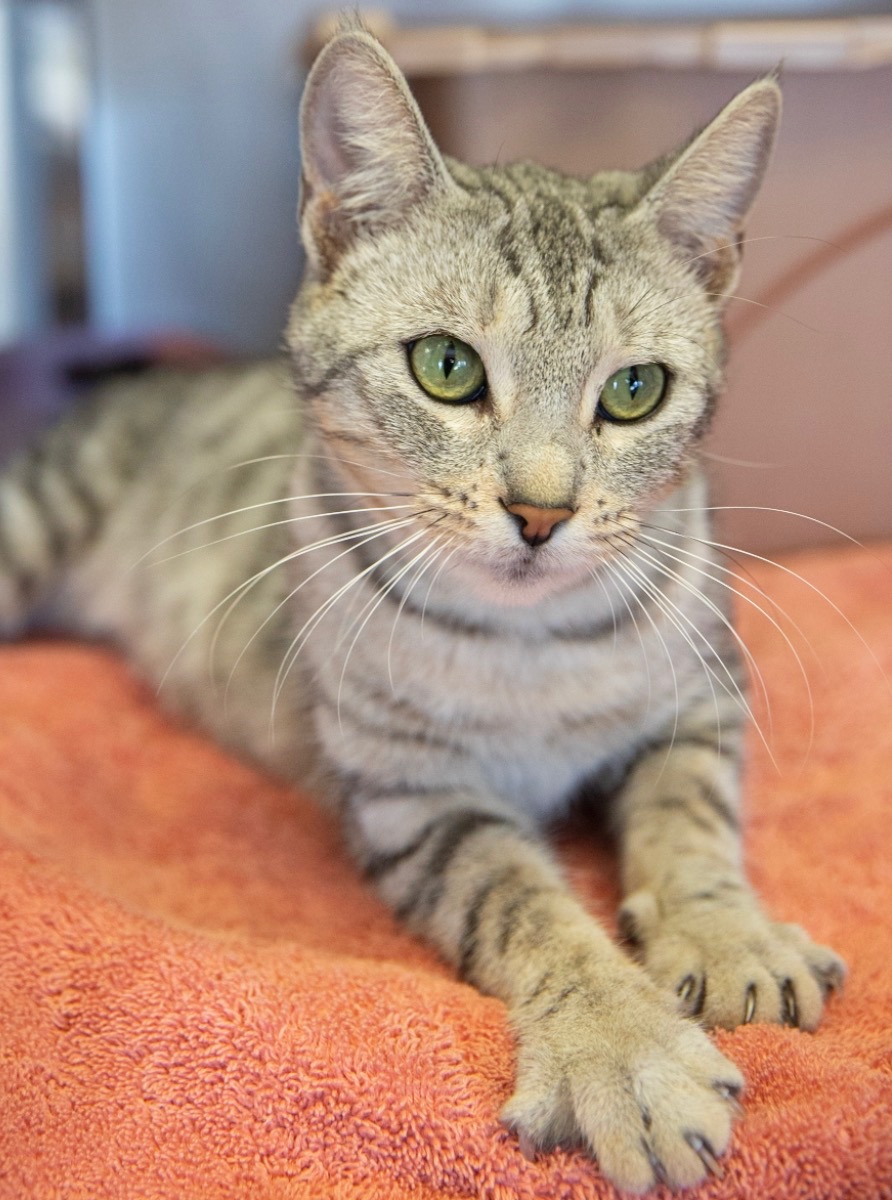 For cats, scratching is a natural, instinctive and important behavior. They aren’t just scratching; they’re scent marking, stretching, flexing, and expressing emotion. Cats scratch to relieve stress and to express happiness and excitement. They also use claws to protect themselves and escape wild predators, dogs, and even humans who may do them harm. Keeping cats indoors won’t solve that, as many indoor-only cats find a way outside at one point or another.

But you don’t have to take my word for it. We have science to back it up. Studies now show not just short term pain and risk of infection, but a higher risk of chronic pain and behavioral problems such as biting and litter box problems. That’s a big part of why this elective surgery is also opposed by the American Association of Feline Practitioners, discouraged by the American Veterinary Medical Association, and outlawed in so many countries, several cities, and now the State of New York.

One study showed that cats who have been declawed were: 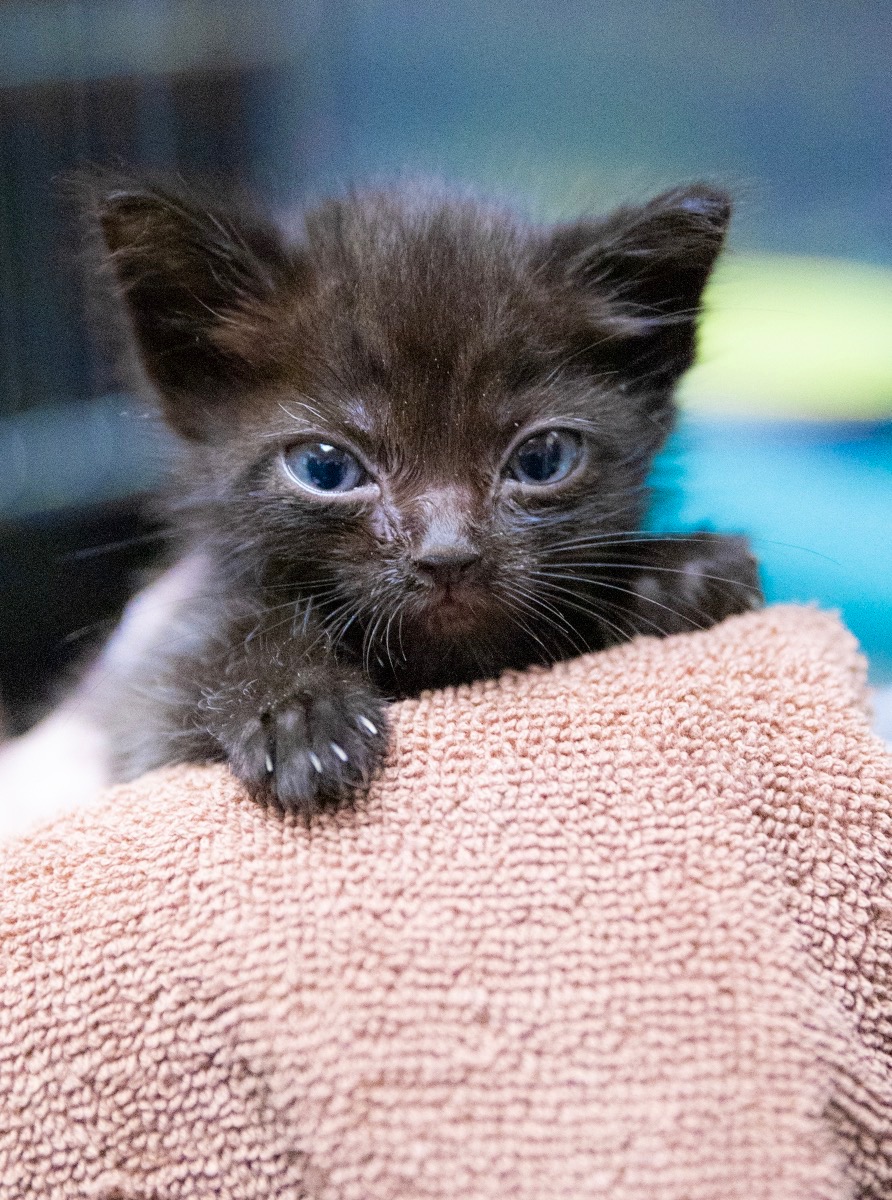 There are plenty of ways to prevent kitty from scratching the furniture. We need to offer them alternatives, not to attempt to stop the behavior altogether. But, as most cat and dog lovers know, if a pristine home is your top priority, a stuffed animal is probably your best bet.

We talk to a lot of potential adopters who don’t know the truth about this procedure. Once they do they almost always change their minds. They don’t want to create pain and stress for their furry family member.

Cats are now the most popularly owned pets in the United States and if the internet has done one thing it has helped spread love and appreciation for our feline friends. How can we love cats so much but still allow this painful procedure that stunts an important part of who they are?

Our goal isn’t to make people feel guilty because they had their cats declawed. We all make mistakes and we are all learning. I know so many people who were offered the procedure and simply had no idea what it entailed. Like so many things, there was a time when we didn’t know better. But now we do. It’s time to change.

The current co-sponsors of H.B. 5508 are Sarah Anthony, Robert Wittenberg, Vanessa Guerra, Frank Liberati, Kevin Coleman, Alex Garza, Julie Brixie, Jim Ellison, Mari Manoogian, Kyra Harris Bolden, Kevin Hertel, William Sowerby, Jim Haadsma, Angela Witwer, Tyrone Carter, Tommy Brann, Ronnie Peterson, Brian Elder, Kara Hope, and Yousef Rabhi. If your legislator is not on that list, please contact them today and ask them to support this important legislation. You can get tips for contacting them and a tool for finding who they are HERE. 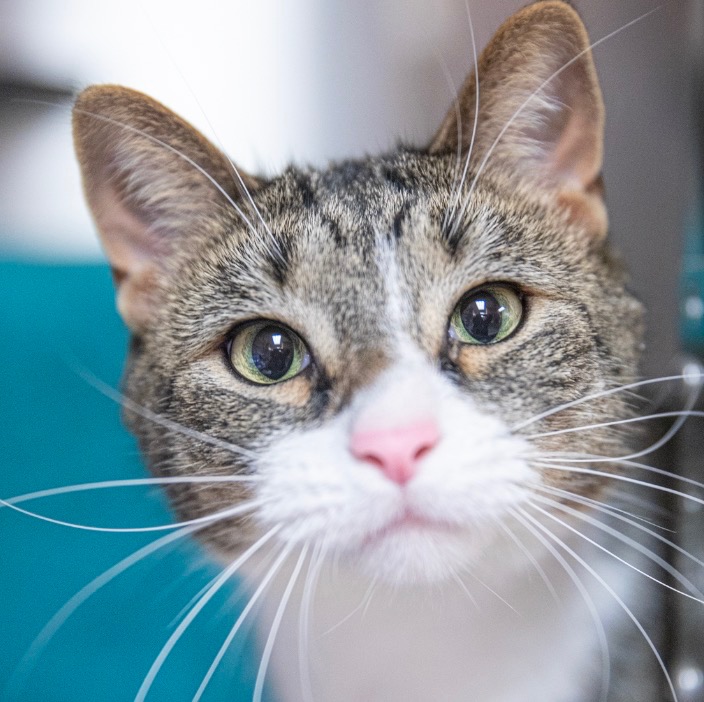 Will you please help?