How to actually punish Mitch McConnell

We need to be as ruthless as he is

There was finally a forum for the Democratic presidential candidates to confront what may be the most pressing issue of the era — the Republican theft of the federal courts.

And while it’s essential to think how we combat the right’s successful hijacking of the judiciary that took place in an era when they’ve only won the popular vote once since 1988, we have to face a chilling reality. If Mitch McConnell is still the majority leader of the Senate next year, the theft will continue regardless of who is the president.

I guess that’s a big part of why Indivisible has turned it’s pro-impeachment efforts into the Payback Project, which aims to punish nine “vulnerable” Senators who voted to acquit Trump and also are decisive on the never-ending assault on progress through vile judicial appointments and confirmations.

My one issue with this excellent effort is promoting the notion Mitch McConnell is vulnerable to defeat in Kentucky. Yes, we have to contest every race. But McConnell’s war chest overflowth from oligarchs all over the country (and probably the world) and he has won one of the most expensive Senate races in US history against Alison Lundergan Grimes, a legacy candidate who had won a statewide race previous. And he won easily.

Winning the Senate has to be the priority and focusing on winnable Senate races and state legislatures is almost as crucial as defeating Donald Trump. It’s very difficult to know where to put your hard earned money where it matters most. And the urge is to put it where it feels best.

I don’t trust my emotions. That’s why I love what Future Now does with its data-driven crusade to win back state houses and then optimize majorities.

If you want to make the GOP pay for Trump flouting the law there's only one way to do it: beating them. There's a March special to flip a swingy State House seat in the Philly burbs where small donors can make a big difference. It's time to Give Smart https://t.co/duSFyYWRO2

THREAD: Trump is moving NOW to lock down Wisconsin, 2020's tipping point state, a year early—but we've got the plan to stop him. We'll knock 50,000 doors for our #1Year2Win campaign—& need your help to fund it. Can you read this thread, RT, & chip in here? https://t.co/unfYOLI1e9

And if you want to boost turnout everywhere while building up a bench for democracy, backing Run for Something now, when there’s still time to get on ballots most is essential:

Running great candidates up & down the ballot is the single most important thing we can do to beat Trump.

If you want to punish the man who stopped a bipartisan response to Russian attacks on our democracy to steal a Supreme Court seat and still refuses to properly secure our elections, there’s no better way then to send him back to the Senate with minority to lead. That’s ruthless.

To do that I recommend adopting a winnable U.S. Senate race. Here are the current ratings, according to the Cook Political Report: 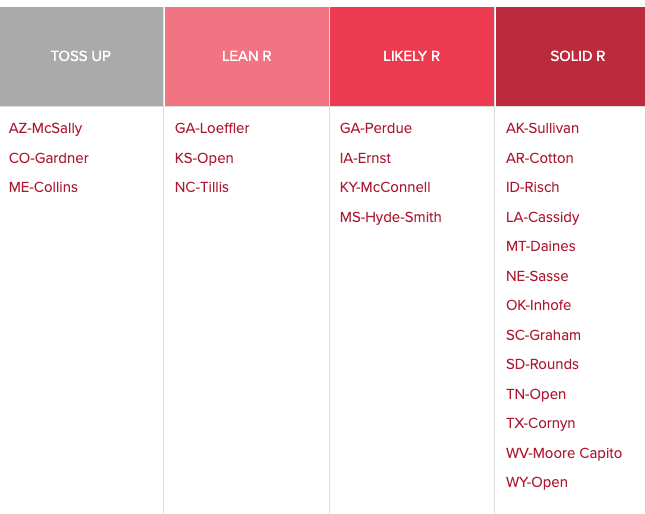 You’ll notice there are six seats more vulnerable than McConnell’s. Win those and his misery is your joy.