According to a breaking story in USA Today, a Betsy DeVos-sanctioned accreditation agency gave approval to operate for Reagan National University in South Dakota, a “university” with no students, faculty, administration, or facilities–things which one might think an “accreditation agency” might notice.

DeVos’ Department of Education saved this accreditor from being removed from the DoE’s list of approved accreditation agencies, even though the agency, the Accrediting Council for Independent Colleges & Schools (ACICS), had engaged in shady practices in the past, including accrediting predatory for-profit colleges such as ITT Tech, Corinthian Colleges and Brightwood College–all of which closed last decade, leaving “thousands of students without degrees and undermin(ing) the value of the education of those who did graduate. Those closures led President Barack Obama’s Education Department to strip ACICS’ powers in 2016.”

Not to fear: Betsy DeVos was all too happy to ignore these problems with ACICS’ judgement, and restored the agency’s authorization to accredit the mostly for-profit colleges that formed the core of its customer base.

Even more ironic than a university without students and faculty is that Reagan National University is widely suspected to be a “visa mill,” a college accused of peddling a chance to live in the U.S. rather than offering a meaningful education.

Reagan National has connections to a different kind of troubled institution, via its ties to the University of Northern Virginia.

In 2011, federal immigration officials raided UNVA, threatening to suspend the college’s ability to accept foreign students. The suspicion: that Northern Virginia was a so-called “visa mill,” a college accused of peddling a chance to live in the U.S. rather than offering a meaningful education.

The Virginia government closed Northern Virginia in 2013 because it wasn’t accredited. It resurfaced the same year with a South Dakota address — the same one Reagan National used on business filings, plus the same agent, Xianhua Fan, spelled slightly differently from the name listed for Reagan National’s president.

In some ways, South Dakota was the ideal place for Reagan. The state has among the laxest rules for colleges in the country. State officials merely ask colleges whether an accrediting group has approved them — they don’t independently hold universities accountable.

“We accept people’s answers on good faith,” said Emily Kerr, who runs the division of business services in the Secretary of State’s Office.

Did Reagan National’s creators have a similar immigration-related motive as the one suspected at Northern Virginia?

So, we have Donald Trump, the most virulently anti-immigrant president in our history, and his Secretary of Education, Betsy DeVos, the most anti-public education Secretary of Education in our history, providing cover for a fake college selling visas to foreign students to enter the country under false pretenses. I’m starting to lose track of the fake colleges with which this administration has been involved. 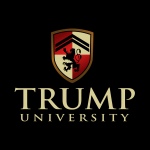 You can’t make this stuff up.

And the cherry on the sundae? The visa mill’s operators changed the name of the fake university from “Si Tanka” to “Reagan National University” in 2017, likely in order to capitalize on the conservative bona fides of the former Republican president’s name.

The perfect bumper sticker for the Trump/DeVos approach to governance as grift.