Amidst the overnight announcement of John Bolton’s upcoming tell-all memoir, based on his front-row seat for this administration’s extortion of Ukraine in order to cheat in the 2020 elections, other members of Trump’s inner circle are now drooling over the prospects of 7-figure book deals of their own.

Although none of these books have been announced as of this date, we have obtained a sneak peak at a few of the titles now currently being furiously typed out by Trump’s closest advisers, and thought our loyal readers might be interested in what these insiders have to say…

First, from the Secretary of Education who never attended a public school…never sent her own children to a public school…and has studiously avoided setting foot in a public school since assuming her current office, comes the blockbuster epic on how to destroy a nation’s public school system from the inside: Betsy DeVos’ “Pedagogy of the Oppressors”. 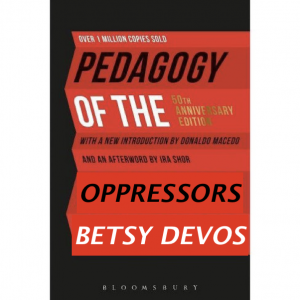 Come along with Sec. DeVos as she explains how her state’s largest school district, which she has devoted the last several decades of her personal energies and political clout to dismantling, should be put down like a rabid dog, throwing thousands of Michigan’s most vulnerable children into the claws of a predatory charter school system that closes schools like bad dry cleaners, and drained the state’s tax coffers of millions of dollars for charter schools that never opened.

Join Betsy as her friends and business partners rake in millions on bogus charter school real estate investments, and as she prevents students from recouping their defaulted student loan payments from for-profit colleges that have gone out of business. Watch in horror as Betsy explains that the biggest problem facing America’s school children and teachers isn’t school shootings, or a lack of funding, or out of control standardized testing requirements, or draconian teacher evaluation schemes: No! It’s grizzly bears!

Follow Trump’s intrepid gumshoe and crack investigator in “Where’s Rudy?”, as he races around the globe in search of incriminating evidence against his boss’ most feared opponents, picking up every rock, peeking around every corner, and never missing a Happy Hour in the pursuit of his nefarious mission. 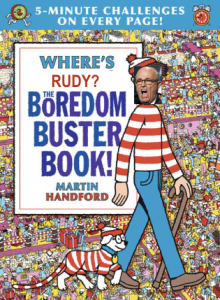 Discover how Rudy never met Lev Parnas, Igor Fruman, or any other thug for whom there is clear evidence of connections to Mr. Giuliani. Find out how Rudy was certainly not conducting a shadow foreign relations policy operation, and absolutely wasn’t involved with “getting rid” of Ukrainian ambassador Marie Yovanovitch, despite audio and video evidence to the contrary. Learn how a man who was once hailed as “America’s Mayor” has become an embarrassing caricature of a small town mob lawyer, now shambling and wandering into a pathetic existence of irrelevance and ignominy.

Next up is an offering from the president’s most trusted adviser, his only daughter, Ivanka (sorry, Tiffany…according to your father, you just missed the cut–better luck next time!): “Daddy, May I Sleep With Jared?”. 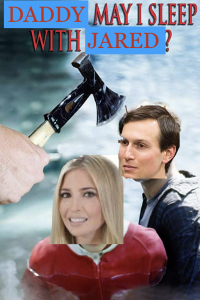 Drawn from her own fairy tale life story, Ivanka tells the charming story of how she asked her father to approve of her relationship with Jared Kushner, and her daddy’s touching requirement that Jared agree to help arrange and cover up the murder of a journalist by his close friend, Crown Prince Mohammad Bin Salman.

Sprinkled throughout this towering 600 page tome there are also chapters on The Donald’s other children, Don Jr. (pp. 24-27), Eric (p. 27), and Barron (pp. 27-28). This portrait of a doting father and his love for his children (well, mostly for Ivanka) will have you scrunching up your nose in disgust, and probably stifling a gag reflex.

And, from the subject of the impeachment trial himself, the long-awaited sequel to O.J. Simpson’s slimy and disgusting, “If I Did It,” we present Donald J. Trump’s magnum opus: “I Did It”. 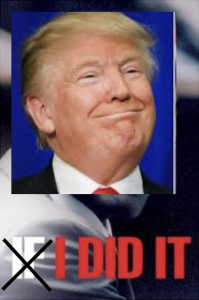 Just to whet your appetite, here are a few selected chapter titles: