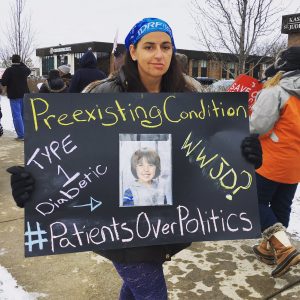 Regular readers of Eclectablog may remember my personal Affordable Care Act (ACA) story — and the many others I shared over the last few years. There’s no denying that the ACA is saving lives and keeping people healthier. There’s also no denying that just like every other policy or law enacted by Barack Obama during his presidency, Donald Trump will stop at nothing to destroy his achievements, no matter how many people he hurts, or even kills, in the process.

Despite promises to help people like me with pre-existing conditions — even going so far as to falsely claim he saved those protections, when he has done the exact opposite — Trump is behind a full-throttle attack on health care that began virtually as soon as he took office. 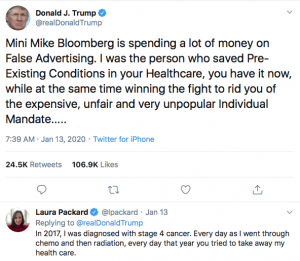 As the story reinforces, Trump has been pressing for full repeal, backing the lawsuit that was recently decided by the 5th U.S. Circuit Court of Appeals, at least whenever it was politically convenient for him.

On December 18, 2019, that court’s ruling in the health care repeal lawsuit Texas v. United States struck down the ACA individual mandate — which requires everyone who can afford it to purchase health insurance, so everyone chips in to keep costs low for us all — and remanding the case back to the North Texas District Court. This decision could eventually lead to the entire ACA being struck down, which would have disastrous consequences for millions of Americans, including me. Ultimately, this is going to be up to the Supreme Court and lives are literally on the line. With a conservative-leaning Supreme Court, this is truly frightening for millions of us.

Here’s what ACA repeal would mean to me. I was diagnosed with type 1 diabetes when I was 25 years old. Although it’s unusual to develop type 1 diabetes after childhood, it does happen, and I need two kinds of insulin – five injections every day — plus other medication, testing supplies and regular doctor’s visits to stay healthy and alive.

For 2014, I purposely chose a plan on healthcare.gov that was as close as possible to the coverage I had, from the same insurer, for comparison’s sake. My monthly premiums dropped by nearly $900 a month, to $530, and I did not qualify for a tax credit to help pay for coverage. So that savings was entirely the result of the ACA’s consumer protections. And even with annual price increases, which are far less than they used to be, I still pay less in premiums than I did before the ACA. I have a reasonable deductible, low co-pays and very few out-of-pocket costs, other than the criminally high cost of my insulin — even with insurance — but that’s a story for another time.

Because of the ACA, I can no longer be discriminated against because I have a pre-existing condition or because I’m a woman, both of which were true before the ACA. I can also find a much more affordable plan as a self-employed person than I ever could before, and people who qualify for tax credits will pay far, far less.

Thanks to the ACA, I don’t have to worry about being denied coverage or facing a lifetime cap on how much will be covered if I should get seriously ill or injured. I take really good care of my health, but anything can happen. However, these protections that help millions of Americans could soon be overturned because of the Trump administration and the judicial benches at all levels that he continues stacking with appointees who share his views.

If the ACA is struck down, the cost of my insurance premiums would undoubtedly skyrocket. Considering I was paying $1,400 a month in 2013, before the ACA, I shudder to think what the cost would be now. Without the ACA’s consumer protections, I could be charged hundreds more each month for living with diabetes, being a woman and being self-employed. Without coverage, I’d never be able to afford the insulin that keeps me alive. I need two bottles of insulin each month, and the monthly price without insurance would be more than $2,000. And that wouldn’t include the appointments with my primary care doctor, diabetes specialist and eye doctor — just three of many specialists people with diabetes need to make sure they don’t develop complications such as kidney failure, blindness or circulatory issues that can lead to stroke, heart attack or amputation. The number of specialist doctors I need right now is limited, because my good health regimen has kept those complications at bay, but if I don’t take my insulin and get regular check-ups, as a 55-year-old woman my risk of all these complications is very real. Any one of those complications could render me a person with a disability who needs financial assistance from the government. Worst of all, the bottom line is that I will die without insulin.

I was lucky I could afford insurance before the ACA, but it might be very different today. Plus, what happens to the 20 million Americans who could only afford health insurance because of the ACA? Or the 135 million who receive protections for pre-existing conditions because of the law?

I can tell you what would happen: We would all get sick or sicker. Many of us would die. Many would be forced to return to the practice of turning to the ER for routine care, which is far less common under the ACA. Emergency rooms must, by law, take any patient — and if they can’t pay, guess who does? The rest of us. Or the hospital takes a loss and must eventually close its doors, or taxes in the area go up. And that doesn’t even begin to address the issue that the insurance markets have started to stabilize — as evidenced by my premiums going down slightly this year — but would be thrown into chaos if the ACA were overruled. 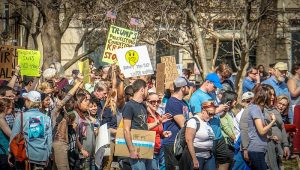 Americans have rallied before to protect our care, using our voices to encourage our elected officials to refuse to pass what would have been a disastrous “repeal and replace” law, the American Health Care Act, in 2017. This sham law wouldn’t have helped anyone other than Republicans seeking to score points with voters by pretending they actually care about their constituents’ health.

The time has come to take action again. We must hold the Trump administration and our elected officials accountable. Call and write your representatives and send a letter to the President. Make as much noise as you can because we must be heard demanding that those elected to represent us protect our care. Millions of lives literally depend on it.