When he ran for U.S. Senate against Democrat Debbie Stabenow, John James proudly bragged about an endorsement he received from Ted Nugent-wannabe Kid Rock. See for yourself:

He not only appeared on stage with Bob Ritchie (Rock’s real name), he hung out with him backstage: 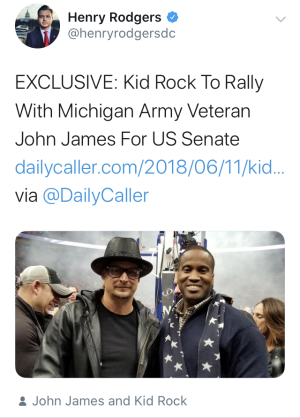 Ritchie has been trying to out-idiot Ted Nugent for a long time in what appears to be a pathetic bid to be Michigan’s most politically incorrect has-been rocker. He was removed as the Grand Marshal of the Nashville Christmas Parade in December last year after calling “The View” co-host Joy Behar a “bitch” on “Fox & Friends” and has a long history of making misogynistic, racist, and bigoted remarks.

This past week, Ritchie was black-out drunk during a performance at his own bar, the Big Ass Honky Tonk Rock N’ Roll Steakhouse in Nashville, Tennessee, and went into a profanity-laced tirade against Oprah Winfrey, Kathie Lee Gifford, and Behar. “I’m like, Oprah Winfrey or Joy Behar, they can suck dick sideways…Fuck Oprah Winfrey and fuck Kathie Lee Gifford…” He also had a message for those who say he’s racist: “I’m, like, fine. Fuck off sideways.”

He ended up being escorted off stage by his own security team since he could barely stand up.

Watch it for yourself:

Shortly after this performance, Ritchie announced he’s closing his restaurant in Detroit. In a statement on his webpage and Facebook page, he said, “I will not be renewing my licensing agreement for my Made In Detroit Restaurant this April. I appreciate all who have patronized our place and still have much love for the City of Detroit and the people / organizations that I have helped there for years, black, white, whatever, but learned long ago, go where you’re celebrated, not tolerated.”

So far, John James has been silent about Ritchie and his classy performance this week. “John James campaigned with Kid Rock last year and bragged about that endorsement — does he still stand by Kid Rock after his offensive comments?” asked Michigan Democratic Party Chair Lavora Barnes in a statement.

It’s a fine question. If James would actually spend some time talking with reporters, maybe he’d have a chance to clear it up. Instead, he spends his time doing out-of-state fundraisers, avoiding the media, and hanging out with Vice President Mike Pence.

Stay classy, Mr. James. Or, rather, GET classy. And maybe tell us where you actually stand.

You can make a donation to Democratic U.S. Senator Gary Peters’ campaign HERE.