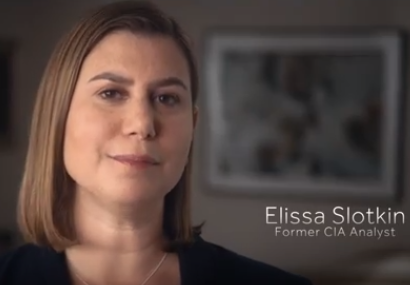 “The partisan divide in the country was on stark display Monday as U.S. Rep. Elissa Slotkin explained her decision to support the impeachment of President Donald Trump.

A small contingent of Trump supporters chanted, hollered and booed throughout the entire town hall, making it difficult to hear any of her explanation. The majority of the audience, however, was in Slotkin’s corner, giving her several standing ovations during the 60-minute meeting.

Slotkin, D-Holly, told the audience of about 450 people that, “This is one of the biggest decisions I’ll be voting on in my short time in Congress. So I took it seriously.”

That is a description of a townhall held by MI-08 Democratic Congresswoman Elissa Slotkin after announcing that she will be voting FOR the impeachment of Donald J. Trump. It came the same day that Slotkin published a thoughtful op-ed in the Detroit Free Press explaining. During a period when much digital and actual printer’s ink is being spilled about what “centrist” Democrats in normally Republican-leaning districts will do about impeachment and what that will mean for their political careers.

Slotkin came into Congress during the 2018 Blue Wave, defeating a corporate-owned Congressional incumbent and former state senate majority leader Mike Bishop by just under four points in a district that had gone Republican since 2000 when Debbie Stabenow vacated the seat. A former CIA analyst, she ran on a progressive platform focused on providing healthcare for all Americans while maintaining a focus on national security stemming from her time at the CIA.

In her op-ed explaining her decision, Slotkin was clear that national security remains front and center in her mind:

Over the past few months, I’ve been told more times that I can count that the vote I’ll be casting this week will mark the end of my short political career. That may be.

But in the national security world that I come from, we are trained to make hard calls on things, even if they are unpopular, if we believe the security of the country is at stake. There are some decisions in life that have to be made based on what you know in your bones is right. And this is one of those times.

There are some decisions in life that have to be made based on what you know in your bones is right. And this is one of those times. https://t.co/1FN17ZnABw

In 2010, I wrote an essay on this site about a conversation that I had with Wes Vivian, a one-term Democratic member of Congress from Michigan. Here’s a bit of that essay:

I had an interesting experience phonebanking for OFA in Ann Arbor this week. One of the names that popped up on my list of calls was Weston Vivian, male, age 85.

It was probably the most inspirational call I made all week.

Weston Vivian was a U.S. Congressman from Michigan’s 2nd District from 1965-1967. As he told me during our phone call, he had the distinct pleasure of voting FOR the Social Security Act of 1965 that created both Medicare and Medicaid.

While we talked, Mr. Vivian told me he is in full support of the current legislation and that it is just as important that it pass today as the bill he voted on in 1965 was back then. He then agreed to call Bart Stupak to ask him to vote for the bill.

“Yes, young man,” he told me. “I support the legislation and I’ll call my member of Congress. Thank you for what you’re doing.”

Mr. Weston was a single-term Congressman. He was part of what came to be known as “Michigan Five Fluke Freshmen”, a group of one-term Democrats who were promptly tossed out of office by Republicans at the next election.

Wes Vivian took a hard vote in 1965, one he knew might end his political career. 44 years later, Democrat Mark Schauer, who rode into Congress in Michigan’s 7th District on the Obama wave in 2008, took a similarly hard vote to pass the Affordable Care Act. Both men knew they may very well been ending their political careers and, as it turned out, they both did. Schauer was defeated in 2010 by career politician and former Bible salesman Tim Walberg who Schauer had unseated just two years prior.

But they did so with clear consciences and with the sincere belief that they were doing what was right for their country.

Slotkin is now doing the same. The encouraging thing is that her constituents largely appear to be supporting her and I have little doubt that there will be a huge number of people helping her reelection campaign next year, a reward of sorts for her integrity and what can only be called patriotism.

When I first sat down with Slotkin in the summer of 2017 to discuss her potential candidacy, I came away impressed. In the time since then, I have only become MORE impressed and I have a feeling that most of her constituents feel the same way.

To support the reelection of Elissa Slotkin, click HERE.

UPDATE: On Tuesday — Impeachment Eve — both Haley Stevens in the 11th Congressional District and Debbie Dingell in the 12th confirmed that they will also be voting for impeachment. Of the two, Stevens is taking the biggest political risk with this vote. Her district is historically Republican, much like Slotkin’s.