The smoking gun shows why you can’t underestimate Trump

Donald Trump’s central insight is that almost no one follows American politics closely, not even the press.

Look at this chart from Dr. Rachel Bitecofer: 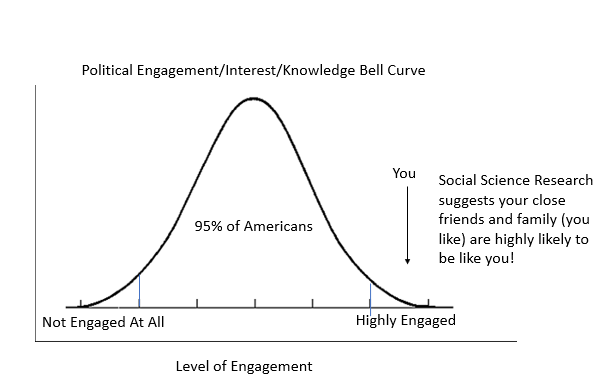 Most people don’t know any of this and they probably don’t care. They’re too busy with their lives or sports or what Fox News tells them is news to confront these or any telling facts.

The media understands that their audience mostly has no idea what happened yesterday and is constantly in search of stories that bring the context with them or make their own context. Things like hurricanes, arrests, or wars. There are exceptions, but mostly on public TV or cable news programs that cater to the highly engaged.

For the rest of America, politics is akin to pro wrestling or a soap opera. They get the broad strokes and are comforted when they tune in and generally understand what’s going on.

This is how Trump can lie thousands of times in one term or try to make an election about email security or corruption, when he is one the most irresponsible, corrupt people on earth. This is how your party can pretend to be enraged about the debt when unemployment is near 10% and then add trillions more to the debt when unemployment is around 4%. This is why Trump repeats himself hundreds of times and trains his audience to do the same.

But it’s the events and narratives that break through and inform the 95% of barely-to-somewhat engaged that generally decide elections, which leads us to this chart:

This is the “But her emails” chart by Jonathan Ladd from data included in the new book Words That Matter.

It tracks what people remembered about Hillary Clinton as the election unfolded. You’ll see that Republicans and the press successfully kept the “email” story — which a Trump State Department review recently noted was effectively a non-story — in about 10% of people’s minds following the debates.

The Wikileaks releases awakened it again, generally by conflating two stories that involved emails. But it was the James Comey memo at the end of October that spiked the story to its highest level of the election and the second highest spike came days later as the former FBI Director “cleared” Clinton and effectively tore open the wound hours before voting.

The Comey memo decimated Clinton because it offered the closest thing to unbiased proof for a narrative Trump had been selling all campaign. And like the Ukraine story, it has strange ties to Rudy Giuliani.

As a marketer, Trump gets the power of “social proof” and Comey’s memo was essentially an endorsement of his ridiculous claim that Clinton’s use of email was somehow criminal. As a con man, he also recognizes the appeal to authority as the sleight of hand that helped make him president.

We know this for sure by looking at what may be the closest thing to a smoking gun that has come out of the impeachment hearings. (If you know the smoking gun I’m referring to, you are definitely in the top 1% of most politically engaged Americans.)

From the Just Security blog:

Multiple witnesses also testified that EU Ambassador Gordon Sondland had told them that, in his conversations with the president, Trump had described his requirement for Zelenskyy to publicly announce the investigations into Biden and 2016.

An announcement by the Prosecutor General was not good enough for Trump.

Sondland has been evasive about whether he was directly told this by the president — probably because he’s still lying. But it was clear “President Zelenskyy had to make the statement,” as Tim Morrison, former Trump national security official, said. And the statement had to be public because this was about projecting the appearance of corruption on Joe Biden not any actual investigation, though further statements would likely had been demanded later to reignite the narrative.

Why does it matter that Trump wanted Zelenskyy?

The first is that this compromised Zelenskyy directly to the advantage of Vladimir Putin, which I think is the broader story here. The Ukraine scandal is part of the payoff for Russia’s interference in the 2016 election in order to secure more help in 2020, I’d argue. But that’s debatable.

What is clear is that Trump understood the value of Zelenskyy making the statement. And that statement was about to happen on CNN when the whistle-blower’s complaint, which has been remarkably accurate, became public.

Zelenskyy brings the closest thing you’re going to get to Comey-like credibility. And putting it on CNN, which Trump has presented as his foe though it did it’s best to promote him during the 2016 election and continues employ his associates, adds another layer of inscrutability.

You may not think James Comey elected Trump in 2016 but Trump sure seems to think so. That’s why he’s trying to replicate the scam again.

He got caught, but we have yet to see if that will stop him this time. This is why we can’t underestimate him.