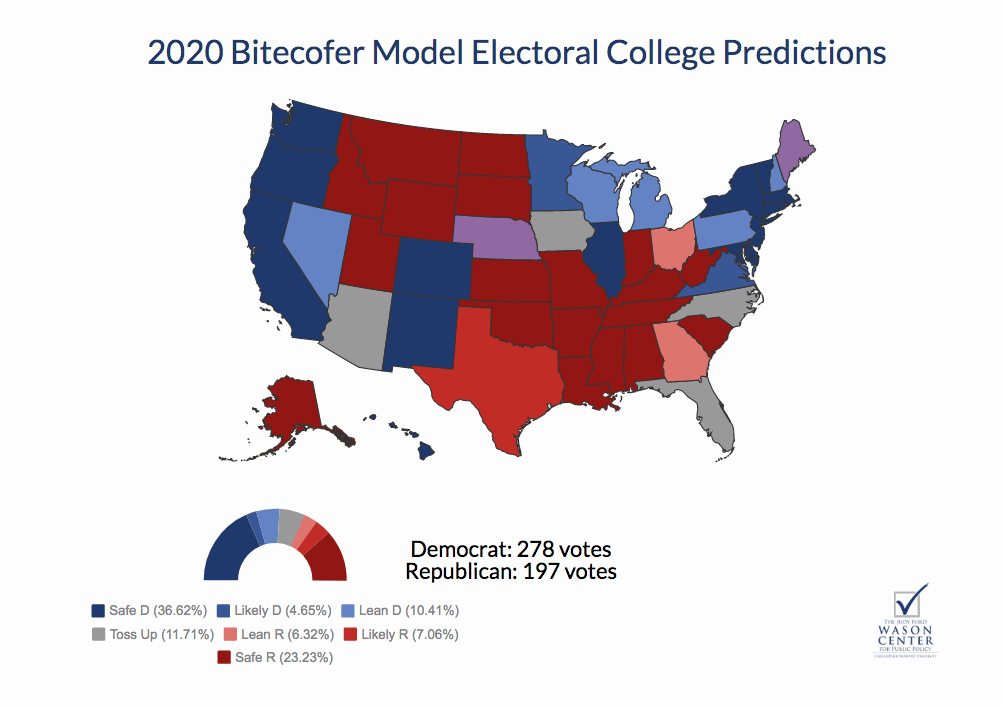 This is your brain on polls.

Just hours before Democrats swept into voting booths to gain full control of recent swing-state Virginia and the Kentucky governorship, polls from The New York Times Upshot and Siena College, which were quite accurate in 2018, found that of the three Democratic front-runners, Joe Biden, Elizabeth Warren and Bernie Sanders, only Biden leads Donald Trump in the key 2020 swing states.

This led to typical media/establishment freakouts, even though the very next day, polls from Data for Progress and Civiqs found that all three Democratic front-runners lead Trump in key swing states, with Warren slightly outrunning her fellow Boomers. (Interestingly, Warren is the only candidate to lead Trump in Arizona in both polls, which we’ll come back to in a minute.)

All of this leads up to a startling revelation that should have Dems characteristically in disarray.

We still have an electoral college — and Donald Trump could easily win it, even as he loses the popular vote by two or three times the 2.9 million votes he lost it by last time.

Despite Trump’s historic unpopularity and likely impeachment, he will still be competitive in all the states Democrats need to win back to defeat him — Michigan, Wisconsin and Pennsylvania.

Dr. Rachel Bitecofer, a recent guest on the GOTMFV podcast and the data scientist who produced the most accurate model for the 2018 election, thinks Democrats will pull it out, with the sort of turnout surge we saw in 2018 and the other day in Virginia. But even she cautions that Trump’s team could win if his brood manages to activate unlikely white voters utilizing the unholy pairing of negative partisanship and Facebook.

So yes, we need a candidate who can win Michigan, Wisconsin and Pennsylvania — and while we should try to broaden the map as much as conceivably possible with the dream of somehow putting Texas into play, forcing the GOP to spend tens of millions to defend the state, any serious campaign must use all of its might to nail down the blue wall before dabbling in Arizona, where few Democrats have won a statewide elections this century.

The good news is Democrats won statewide elections in Michigan, Wisconsin and Pennsylvania just a year ago. Those wins were especially convincing in Michigan and Pennsylvania, and both states have expanded voter access in time for the 2020 election. They require lots of attention but they are the bricks in the wall. Wisconsin was much closer in 2018 — and the voter restrictions that helped deliver the state to Trump are still intact.

To irritate your nerves a little more, I’ll add New Hampshire to the list of states Democrats must be obsessed with. Clinton only won it by .4%, less than 3,000 votes and the Republican governor has signed new voting restrictions aiming to give the state to Trump.

Now what matters: there is so much you can do about this.

In her column this week, Michelle Goldberg laid out multiple things you could be doing today, no matter where you live, in addition to supporting Indivisible on a national and local level:

1. Donate to state parties.
Michigan Democratic Party Chair  Lavora Barnes made the case for giving to the party of the state Trump won by the smallest margin earlier this year. You can give here.

Ben Wikler is doing amazing things as state chair of the Wisconsin Democratic Party. Give the WisDems money if you have it.

THREAD: Trump is moving NOW to lock down Wisconsin, 2020's tipping point state, a year early—but we've got the plan to stop him. We'll knock 50,000 doors for our #1Year2Win campaign—& need your help to fund it. Can you read this thread, RT, & chip in here? https://t.co/unfYOLI1e9

2. GOTMFV
“Andrew Gillum, who narrowly lost the Florida governor’s race last year, is leading a huge voter registration drive in that crucial state,” Goldberg writes. Hundreds of thousands of formerly incarcerated people will be able to vote in that state for the first time, despite the GOP’s efforts to gut Amendment 4, the largest single expansion of voting rights since the 1960s. “Stacey Abrams, who narrowly lost the race for Georgia governor, has founded a group, Fair Fight 2020, to register and mobilize voters and tackle voter suppression.”

3. Support a swing local candidate anywhere.
One of the most promising thing about 2019 is that giving to local candidates is exploding. GOP gerrymandering is now almost a decade old and wearing out its effectiveness. If turnout explodes the way Bitecofer imagines, Democrats could win all sorts of unexpected races.

While you have the time, start hunting down state legislative candidates you may want to back in your state or in Michigan, New Hampshire, Wisconsin or Pennsylvania.

In the best episode of The Sopranos, Carmela Soprano’s therapist tells her, “One thing you can never say: that you haven’t been told.”

We’ve been told. Let’s try to do better than Carmela.

If you have suggestions or local candidates people should back, put them in the comments, yo.