The One University coalition of Univ. of Michigan students and allies push the Board of Regents for equity for Flint & Dearborn students

Over the past year, a coalition of University of Michigan students, faculty, and allies have formed a coalition called One University to push the university to more fully and equitably fund and support the students at their Flint and Dearborn campuses. Students at these campuses pay 80% of the tuition fees that their counterparts in Ann Arbor pay yet they receive just 25% of the per-pupil funding. As a percentage of average family income, Flint Wolverines accrue nearly three times the debt load and Dearborn students take on twice as much. A number of programs aren’t available at all to Flint and Dearborn students:

The One University coalition’s has seven goals:

Yesterday, One University coalition members, primarily the students, held a rally on the Flint campus to highlight their efforts. The rally featured multiple speakers from both the university as well as allies in the local community. Because the Washtenaw County Democratic Party (of which I am the Chair) passed a resolution at their September General Membership meeting in support of the One University coalition’s goals, I was one of them. The speakers were: 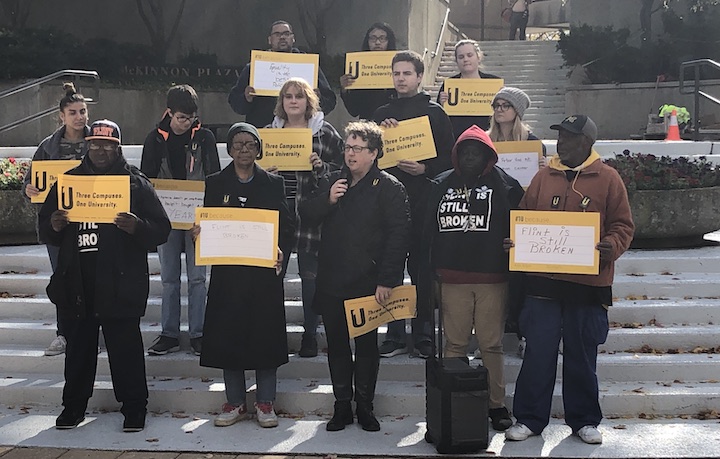 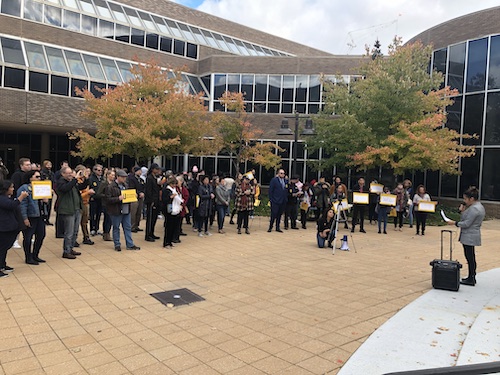 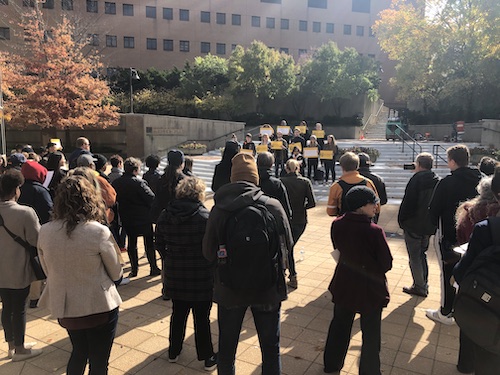 While all of the speakers had a different perspective, they shared a common vision and desire to “break the silos” that exist because of the disparities that exist between the three campuses. The university has ONE president and ONE Board of Regents yet they operate the three campuses as if they are three separate institutions. Keep in mind that University of Michigan’s budget is in the BILLIONS of dollars and their unrestricted reserves are over $4 billion. That’s not all from the state higher education contribution and how it gets spent in the future is largely determined by the Board of Regents and the administration itself.

Following the Board of Regents meeting, I spoke to one of the Regents, seven of the eight of which are Democrats. They told me that their focus is on outcomes, primarily graduation rates. The Go Blue Promise, they said, is similar to the Kalamazoo Promise which guarantees free college education for all students who graduate from Kalamazoo schools. According to this Regent, while it has increased the number of students enrolled in college after graduation, it has not moved the needle on graduation rates. This was their justification for not extending the Go Blue Promise to Flint and Dearborn students. They also said that college affordability was not the reason for low graduation rates in Flint and Dearborn so other goals of the One University initiative are not likely to impact these outcomes. Finally, the claim that amount of money they are allowed to spend in Flint and Dearborn is out of their hands, determined by line items in the money they get from the state, determined by the state legislature.

I understand that policy decisions should be made based on data and that there are myriad reasons why students do not complete their college education and graduate. However, if these programs are deemed worthy for Ann Arbor students, it simply makes no sense why they wouldn’t be equally, if not MORE, beneficial for Flint and Dearborn students. At any rate, it’s important that we push them to improve the equity between the three campuses so that, in U-M President Mark Schlissel’s own words, U-M can ensure that their community “allows all individuals an equal opportunity to thrive.”