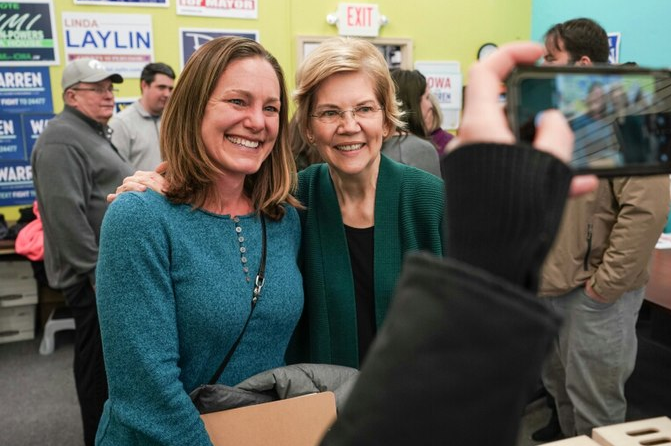 The press — and a few of her opponents — think they have Elizabeth Warren cornered.

She refuses to buy into their urge to get a soundbite that plays into a right-wing narrative that reducing people’s health care costs should be entirely judged by prospective taxes.

Paul Waldman explained why this press is so into this game back in September:

That’s because from where [the media sits], there is almost no goal more important than creating moments that are dramatic and controversial, and will be replayed and discussed on their own networks and in other news outlets. Drama and controversy occur when a candidate says something that generates a strong reaction, often in the form of harsh criticism from the other party.

Eric Levitz describes how this reveals a hidden bias in the press:

If you are committed to abetting the meteoric rise of private health-insurance premiums, a debate moderator will not ask you to level with the American people about how much your approach to health-care policy will cost them. If you are committed to reducing overall health-care costs by expanding the public sector’s role in medical provision, you will be ritually scolded for the extraordinary (and extraordinarily decontextualized) fiscal price of your program.

That the press is now joined in this effort by Democrats is somewhat inevitable, given Warren’s rise, but dismaying.

A fixation on taxes has led to the rich bleeding of the middle class both of wealth and the government services that built our widespread prosperity and the modern Democratic Party. This happens through racial dog whistles turning people against their own government.

The real joke is that no one — especially not, Paul Ryan — cares about how ANYTHING is paid for in America.

Donald Trump continues to prove this ridiculously comical ways. He’s violating the Constitution to force Americans to pay for a wall that most of us don’t want and he said Mexico would pay for. He’s told us Saudi Arabia is “paying” for our soldiers being stationed in his country, with no actual accounting of this or admission of who would pay for the war this escalation is designed to provoke. And his tax scam like all Republican tax cuts for the rich and their corporations that were supposed to “pay for themselves” are going right into the deficit so future Republicans can demand that anybody but the rich pay for them.

What people actually care about is WHO pays for things. If the rich are paying, the right screams bloody murder and gets the media to go along with it, spreading the fear this will be burden to the middle class, instead of a transformation that will offer both security and the promise of a return to growing wages.

And Joe Biden wisely noted that any expansion to our current system will be savaged by the insurance industry. Insurers get that once the savings we see in Medicare are applied on a grander scale, their glory days are done. And billionaires sense that this kind of reform will end their days of paying lower tax rates than their secretaries. The reason the right is still trying to kill Obamacare is because it insured millions with taxes that mostly soaked the super-rich.

So why fight like hell for preserving a system that’s already nearly twice as expensive as what countries spend all around the world to insure everyone, without exceptions?

Even right-wing estimates find that a Medicare for All system can save us trillions. This requires huge assumptions about how the system works. But, guess what. So do even far more moderate expansions of the system.

Warren should note that America already pays for Medicare for All — we just don’t get it.

(She should also use every attempt to corner her to note that her plan preserves Medicare from Trump’s plan to privatize and gut it. She should also throw in a pitch to her plan to expand Social Security by $200 a month because it’s just electoral gold.)

A true Medicare for All plan like Bernie Sanders and Elizabeth Warren back would give America the health care we already pay for while reducing the costs of health care that are end endless private tax on workers.

We must force the press and the “moderates” to justify this private tax. Of course, this is will be a challenge because the right was fought for decades to control the terms of this debate, with too much help from Democrats.

That has to change.