Call Trump’s attacks on Biden, and any Democratic candidate, what they are — birtherism

Trump knows propaganda works, which is why sticking together is our only hope 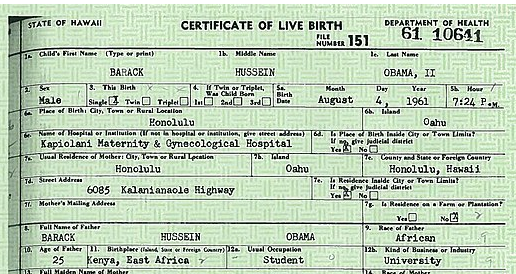 Donald Trump’s attacks are all the same attack. His political career was born out of the baseless, racist assertion that Barack Obama couldn’t possibly be a citizen. And Democrats will only defuse his conspiratorial smear-mongering if they stand together and call out all his attacks for what they are — perversions of birtherism.

To understand the seriousness of we face, we have to accept what’s coming next — political prosecutions and possible show trials of Trump’s political adversaries.

“This is now a full bore conspiracy to corrupt multiple government agencies and place them at the disposal of Trump’s reelection campaign. It involves numerous cabinet members and State Dept officials,” Greg Sargent tweeted on Sunday. “And given Barr’s role, it may result in prosecutions.”

This should be no surprise considering that on August 30th, the president’s “lawyer” tweeted, “Prosecutions will happen.”

When the indictments come, our courts — which are filling up with Trump appointees — will be all that stand between us and absolute tyranny. But for the 2020 elections, the ultimate test of whether we are still a nation of laws, it doesn’t even matter if the prosecutions are successful in court — they’re meant to destroy Donald Trump’s opponents in the court of public opinion.

And signs show that Trump’s baseless attacks on his opponents still work.

This makes sense because — :( — propaganda works.

“Research demonstrates that a message that’s heard multiple times, regardless of its content is deemed more credible,” master consultant and host of the Brave New Words podcast Anat Shenker-Osorio tweeted.

And the more scared people are, the more susceptible to comforting lies they become.

It doesn’t matter that this propaganda depicts the opposite of what happened: Biden with the backing of allies and Republicans in Congress demanded the resignation of a prosecutor who, among many other things, refused to prosecute the company his son worked for.

What matters is that the lie is seeping through and is now bound to be confirmed or at least stimulated by a review of the matter the Ukraine government is now engaged in appease the Trump Administration.

These formal investigations of spurious conspiracies invented by the right, both by our Department of Justice and Ukraine, could end up having the effect of providing official and timely confirmation to Trump’s attacks on his opponent, much in the same way the Comey letter did.

An assault on our elections becoming official policy of the American government was inevitable when William Barr became Attorney General without even much of a fight. Barr’s “pre-Magna Carta” view of the powers of a Republican president were well known during his confirmation — yet he slipped into office, defused the explosive findings of the Mueller report, and almost successfully quashed the whistleblower’s attempt to expose Trump’s demands on Ukraine.

And the biggest mistake you can make is to imagine that only Joe Biden is vulnerable to this sort of assault.

You may want to return the bad faith of Trump’s smears with the good faith of fisking Biden’s record through the corrupted lens of this attack, especially if you feel this may help your choice for the Democratic nominee.

But by doing this you’re inviting him to destroy your candidate in the same exact way. And if you don’t think your pure-hearted champion is vulnerable to such attacks, consider that Trump called on Barack Obama to be investigated and possibly removed from office and deported for the crime of being born.

What possible decent purpose was behind birtherism? A quest for transparency? An unquenchable desire for disclosure? Tell that to the judges handling the various lawsuits involving Trump’s undying attempts to hide basic documents — like tax returns — that every other president since Nixon has voluntarily released.

It’s even more absurd to believe Trump actually cares about the corruption of the children of politicians as his crime family collects tens of millions while his daughter and her husband sit in the White House, over the objections of almost everyone who cares about America’s national security.

I understand that you may not want to invest Biden with a defense that closely identifies him with Obama as a security blanket and imbues him with the veneer of suffering racist persecution. And I get that and this an objection that may render this defense inoperable.

But I will make the case that the subtext of everything Trump does contains a racist and misogynistic appeal — which is why we must be careful not to humor or indulge any of it.

“The Right’s core narrative urges voters to fear and resent people of color, to distrust government, and to trust the marketplace,” Ian Haney-Lopes writes in Merge Left. In this story, Biden is the government and Trump is the marketplace. Your favorite candidate will be a suitable stand-in for this line of attack, too.

Birtherism like dog whistles have to become more diffuse as they’re used so that they provide for plausible deniability. As Reagan and H.W. Bush operative Lee Atwater so helpfully explained:

You start out in 1954 by saying, “Nigger, nigger, nigger.” By 1968 you can’t say “nigger”—that hurts you, backfires. So you say stuff like, uh, forced busing, states’ rights, and all that stuff, and you’re getting so abstract. Now, you’re talking about cutting taxes, and all these things you’re talking about are totally economic things and a byproduct of them is, blacks get hurt worse than whites.… “We want to cut this,” is much more abstract than even the busing thing, uh, and a hell of a lot more abstract than “Nigger, nigger.”

Trump had to chill on the birtherism and then jokingly disavow it in 2016. He could attack Hillary Clinton for being a woman who used email in the similar way that her predecessors did. Now he just has to invent a conspiracy theory involving Biden just happens to confirm all of the lies that justify inviting foreign interference while serving Vladimir Putin’s interests.

It’s all the same game, empty lies to serve the big ripoff behind Trump’s purposeful division and hate. You may not want Joe Biden as your nominee. And there are endless way to make that case without buying into Trump’s smears.

But if you want your candidate ready to stand up to this coordinated, tested assault on whomever the one person who gets a chance to beat Donald Trump is, you better start calling out these attacks for the perverse form of Birtherism they are.