Betsy DeVos owes taxpayers at least $100,000. And we owe her our contempt. 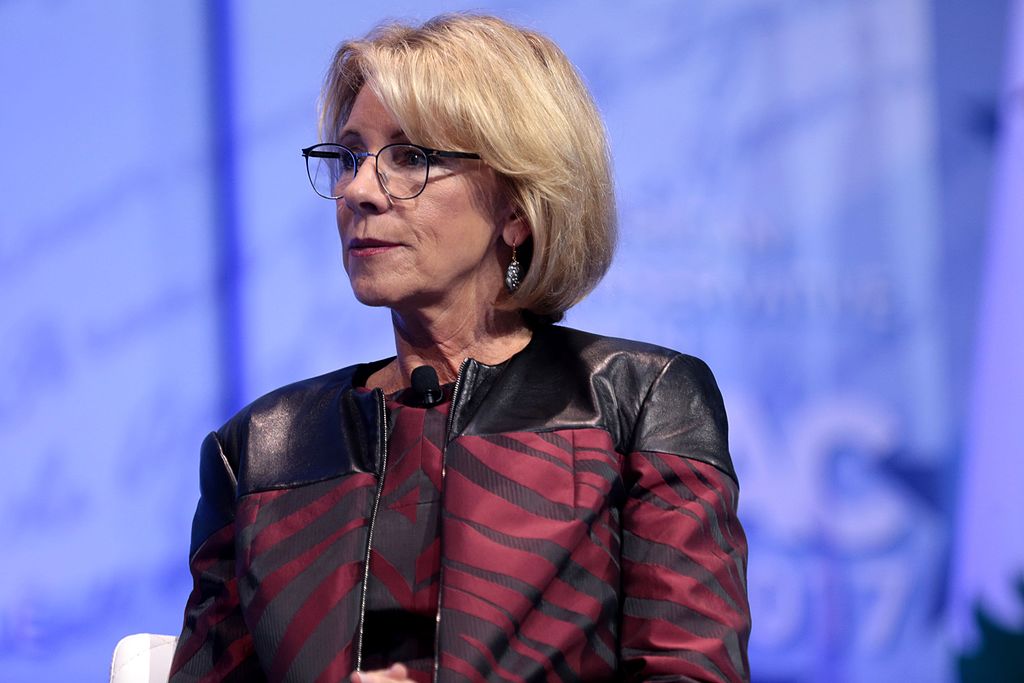 Last Thursday should be remembered as the day the news caught up with the remorseless wretchedness of Betsy DeVos.

We can now say with certainty that Donald Trump’s Secretary of Education is illegally ripping off Americans who’ve already been illegally ripped of by a for-profit college of the sort her policies encourage.

A federal judge on Thursday held Education Secretary Betsy DeVos in contempt of court and imposed a $100,000 fine for violating an order to stop collecting on the student loans owed by students of a defunct for-profit college.

The exceedingly rare judicial rebuke of a Cabinet secretary came after the Trump administration was forced to admit to the court earlier this year that it erroneously collected on the loans of some 16,000 borrowers who attended Corinthian Colleges despite being ordered to stop doing so.

Of course, the crime is multiplied by who will pay the fine: Taxpayers.

A cool $100,000 is nothing for a born-billionaire like DeVos, whose family’s capital gains income went up $5 million in 2018, after the Trump tax cuts went into effect.

Notably, this “exceedingly rare judicial rebuke” pales to an an even more historic slam of DeVos’ policies and worldview, delivered by one of her — now former, I’d bet — allies.

“The time has come for us to end and stop the insanity,” top aide and student loan strategist to Education Secretary Betsy DeVos A. Wayne Johnson told The Wall Street Journal on Thursday, announcing his resignation from the Department.

DeVos’ penchant for destroying all forms of public education has been so ably chronicled in the work of our Mitchell Robinson and summed up nicely on this podcast episode “Privatize, Monetize, Weaponize: How the DeVos family devoured Michigan’s schools“.

DeVos not only favors for-profit colleges that load students up with debt, she is an activist in favor of predatory lenders, Mitchell explained:

By gutting regulations intended to protect students, many of whom are veterans, minorities, and first-generation college attendees, from being defrauded by predatory schools and colleges, Betsy has put the interests of these for-profit colleges—some of which she has personal financial interests in—ahead of students.

“We run through the process of putting this debt burden on somebody…but it rides on their credit files—it rides on their back—for decades,” Johnson said, sounding a lot like an Eclectablogger.

He proposed forgiving up to $50,000 for anyone with federal student-loan debt, at a cost of about $925 billion, eliminating the student loan balances of nearly 37 million borrowers. This would be paid for by a tax on the richest Americans, many of whom now pay lower tax rates than their Reiki healers.

Notably this plan is even more generous than what Elizabeth Warren has proposed — a proposal that DeVos has called “crazy,” though it costs far less than the Trump tax cuts targeted to rich people and their corporation.

Johnson is a Republican, but the rarest of the Republicans — the kind that looked closely at our student loan crisis and the havoc its wrecked for the generations who did not benefit from the nearly free college that most Baby Boomers enjoyed.

The people join U.S. Magistrate Judge Sallie Kim in holding Betsy DeVos in contempt. And we’re sick of paying for her hobbies of gutting public education and loading us up with the debts that billionaires like her have shirked for decades.