Brave New Words and Merge Left reveal how to engage our base, persuade the middle, and reveal the opposition for the outliers they are. 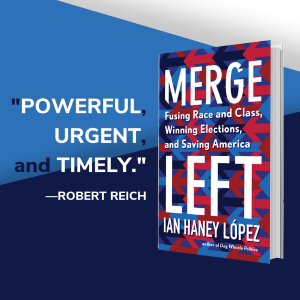 If you know Shenker-Osorio or Haney López’s work at all, you will not need any more encouragement than me just pointing these two things exist before you grab them — in fact, you probably already have. (And if you have you should subscribe to and rate Brave New Words on iTunes. It really helps.)

If you don’t know either of these two, I envy you for how your mind is about to get blown.

Anat Shenker-Osorio is the author of Don’t Buy It: The Trouble with Talking Nonsense about the Economy a consultant who has worked around the world winning voters over to progressive causes. If you listen to the GOTMFV show, you know she’s one of the all-time great podcast guests.

Her new show unfolds how “narrative shifts” happen, from the groundbreaking work of ACT UP during the bleakest days of the AIDS crisis in America to 2018 in Minnesota where the “Greater Than Fear” campaign demonstrated how to tackle the right’s strategic racism directly with a research-backed approach that merges race and class. If this sounds like what could be the template for a 2020 Democratic victory, now you’re getting it.

Democrats have not won a majority of the white vote since LBJ signed the Voting Rights Act into law. The right called the effort to flip the electoral map in Republicans’ favor The Southern Strategy and observers called it “Dog Whistle Politics.” That was the name of  Haney López’s 2014 book that exposed the coded approach the right had taken and would shamelessly exploit in the 2016 election.

Exposing how the scam worked proved to not be good enough, given that Democrats have most successfully countered it only by adopting dog whistles tactics on their own — think of the worst parts of the 1994 crime bill. New strategies are necessary.

Before the 2018 election, Haney López, also a fantastic podcast guest, combined with Shenker-Osorio in a project backed by Demos and key labor partners to find a way to take on dog whistles with a strategy that could be proven to work. You can hear the results in the Brave New Words podcast and in Merge Left, in which Haney López exposes how pervasive and effective strategic racism is, even to many minority voters, and the ways it can be overcome to defeat the right and help rebuild and complete America’s safety net.

As someone who spent a lot of 2016 laughing at Trump and telling you that he can’t win, I’m committed to doing the opposite now. You need to know he’s getting better at the worst things and Democrats have not yet proven they know how to contain or oppose him.

This podcast and book have the answers we need — now all we have to do is make sure that as many people as possible grab them.