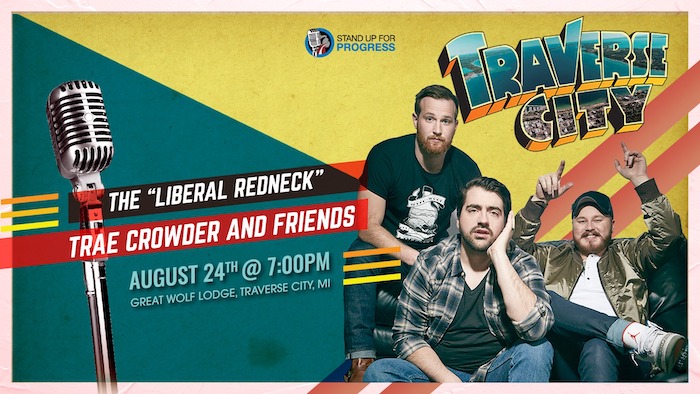 Trae’s comedy turns a mirror on the stereotypical southern rednecks he grew up with and shows just how ridiculous so many of their political views are. From transgender people using public restrooms to Black Lives Matter and Trumpism, he tells it like it is in his unique southern style.

He began stand up in 2010 and eventually hooked up with Corey Ryan Forrester and Drew Morgan, two other Tennessean comedians who were skewering the backwards conservatism of the south and they began working together. In 2016, with Trae’s videos going viral, they published a book based on their comedy titled The Liberal Redneck Manifesto: Draggin’ Dixie Outta the Dark, and began formally touring together as a trio.

The three of them are currently on tour — the WellRED Comedy Tour — and next week, they’ll be doing a show in Traverse City to benefit Progress Michigan, our state’s premier progressive advocacy group, one on the forefront of holding Republicans and other conservatives accountable in government and elsewhere. The show will be on Saturday, August 24th at the Great Wolf Lodge. Tickets are available HERE.

I chatted to Trae Crowder by phone this week to learn more about their comedy and the WellRED tour. [NOTE: there should be a redneck font so you could get the true feel of having a conversation with Trae.]

“I honestly never considered myself a “political” comedian, per se. I thought of it more as social commentary type stuff. From the beginning I was talking about racism or religion and those types of things, but because of where I was from [Celina, Tennessee], that sort of made it political.”

While the WellRED tour is a standard comedy tour, Trae, Corey, and Drew do some performances to support progressive groups around the country like Progress Michigan. And, despite the more intimate connection they have with their fellow southerners, they still find very receptive audiences outside of the south.

“Between me and Corey and Drew, we cover a pretty wide variety of topics,” Trae said, describing what people can expect at their show. “Basically everything that a straight white man can come up with. Corey’s a newlywed so he talks about being married and going on his honeymoon along with a lot of politically charged stuff. Drew’s dad is preacher so he gets into religion more than the rest of us tend to. And I live in California now so I talk about the difference between that and the south and how people see me and the south out there. And I also talk about the state of things at present. But all of us talk about our rural roots and where we come from and what people are like there. What we have found is that in most parts of this country, there’s people who can relate to that. There are rural parts of every state and I know Michigan is that way.”

I asked Trae, as someone who is traveling around the country and talking to people all over, if he’s hopeful that Trump will be defeated in 2020 or if he’s fearful about what will happen. “Oh, I’m definitely fearful,” he said. “Mostly because I’m one of those people on the left who got punched in the mouth in 2016. And I felt even worse about it because I, more than anybody, should have known better. I had been trying to caution people to take Trump more seriously because I could see that it was a real thing that was happening. But! At the end of the day, I still very much expected him to lose. So, I was pretty shocked and upset when that didn’t happen. Ever since that happened, I’m not gonna count any chickens anymore, ya know what I mean? But I remain hopeful and cautiously optimistic. I’m a Tennessee football fan so I’ve learned to find hope in darkness, ya know?”

If you are going to be in the Traverse City area on the 24th, you REALLY don’t want to miss this show. I saw them when they did two shows in Lansing last spring and all three of them are side splittingly hilarious.

Get your tickets TODAY!