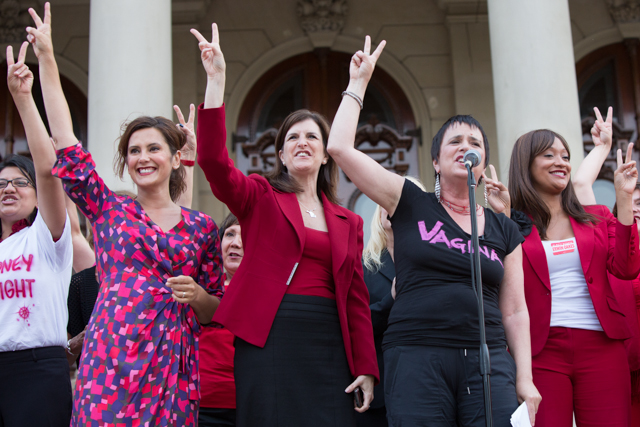 You know that winning Michigan, the state the Republican nominee carried by the slightest margin in 2016, is essential to defeating Donald Trump in 2020.

You also know that our state is not Wisconsin, which is “the pivotal battleground state.” But Democrats will not win without carrying Michigan. I’ll go further: Democrats cannot win in 2020 if Michigan is close.

Democrats pretty much ran the board in the Mitten on the statewide and federal level last year. But there are still at least two winnable House seats Michigan’s 6th — represented by Fred Upton, the man who made sure the repeal of the Affordable Care Act passed the House — and Michigan’s 7th — represented by Tim Walberg, one of the most useless pieces of lumber in Congress. And we also missed the chance to take back our Supreme Court.

But even the losses contain lessons (such as, don’t help save Fred Upton).

These lessons aren’t as important as Democrats confronting Trump’s strategic racism by employing a race-class narrative, as Ian Haney López describes in his urgently needed new book Merge Left. This is especially important since Trump’s  racist reelection campaign — and his current assault on legal immigrants — is focused the “electoral map that runs through the Rust Belt and Upper Midwest.”

But these insights could be helpful to help shape your choice of a candidate.

We need to nominate someone who can not only win but win convincingly with in a wave election that makes it possible to successfully govern. Note: This did not happen for us in Michigan last year because we may have the most gerrymandered maps in the nation — a point that’s key to this story.

1. Women are more electable than men.
The only candidate backed by the Michigan Democratic Party on every ballot in Michigan who did not win in 2018 was a straight white male — the fantastic Sam Bagenstos. He should be on our Supreme Court right now. Instead Elizabeth Clement was the only statewide Republican-backed candidate to win in 2018.

I know there’s lots of talk about Democrats having PTSD over 2016 leaving them afraid to nominate a woman. But just look at the numbers in the Upper Midwest. While Sherrod Brown won reelection to the U.S Senate from Ohio by almost 7%, Michigan’s Senator Debbie Stabenow nearly matched that margin. And Wisconsin’s Tammy Baldwin won by double-digits.

This theme elevated traditional progressive beliefs in government delivering for people along with a critique of Republicans who’ve abandoned public investments in favor of tax cuts for corporations. It also implicitly benefited nearly all voters in a tangible way.

I’m all for free college and Medicare for All. And I hope the Democratic nominee fights for both. But a promise to fix the nation’s damn infrastructure tied into a Green New Deal may be a simpler sell. (And something you could do with the same “Emergency” logic trump is using to build the wall.)

Of course, the problem is delivering on the promises.

While Whitmer won by almost 10% and Democrats got more votes in both the State House and Senate, Republicans still have a choke-hold on our state government thanks to the aforementioned gerrymandering. Which leads us to…

3. Voting rights and ending gerrymandering are amazingly popular.
Want to back two policies that you know are supported by 60% and almost 67% of voters in state Trump won with only 47.5% of the vote? Then back automatic registration and the end of gerrymandering.

In other words, run hard on HR1 — the historic first bill the new Democratic House passed in January.

Run on it because it also allows you to make key arguments that will allow you to govern, like:

Even if Democrats were able to get automatic voter registration and independent redistricting through the Congress by busting the filibuster, the Republican Supreme Court could still crush it. Michigan Republicans right now are suing to overturn the voters and bring back gerrymandering. And John Roberts — who claimed that it’s up to the voters to fix gerrymandering — may help them.

Democrats missed their chance to make the argument that extraordinarily unpopular Citizens United could have been ended in 2016 if the Democrat won. For generations, Republicans have weaponized the Courts to win elections largely based on ending legal abortion, a position only backed by about 1 in 10 Americans. Making the fight over the courts all about expanding the vote and making votes count will put Republican on the defensive in an issue that will continually expose their disdain for voters.

4. Just legalize weed.
Our ballot measure legalizing marijuana was far less popular than voting rights. But the 55% support it won in November of 2018 made it more popular than nearly every politician in America.

Yes, weed is a relatively minor criminal justice issue. But it’s a major generational issue, a sign that politics has some correlation to reality. It’s also a practical thing this election could deliver that just happens to be extraordinarily popular with the younger voters Democrats need to turn out.

This is the seventh time I will vote for a U.S. president. And though I haven’t smoked forever, I  do not want another Democratic nominee whose views about legalizing the most harmless recreational drug available, besides caffeine, are even older than my old ass self.